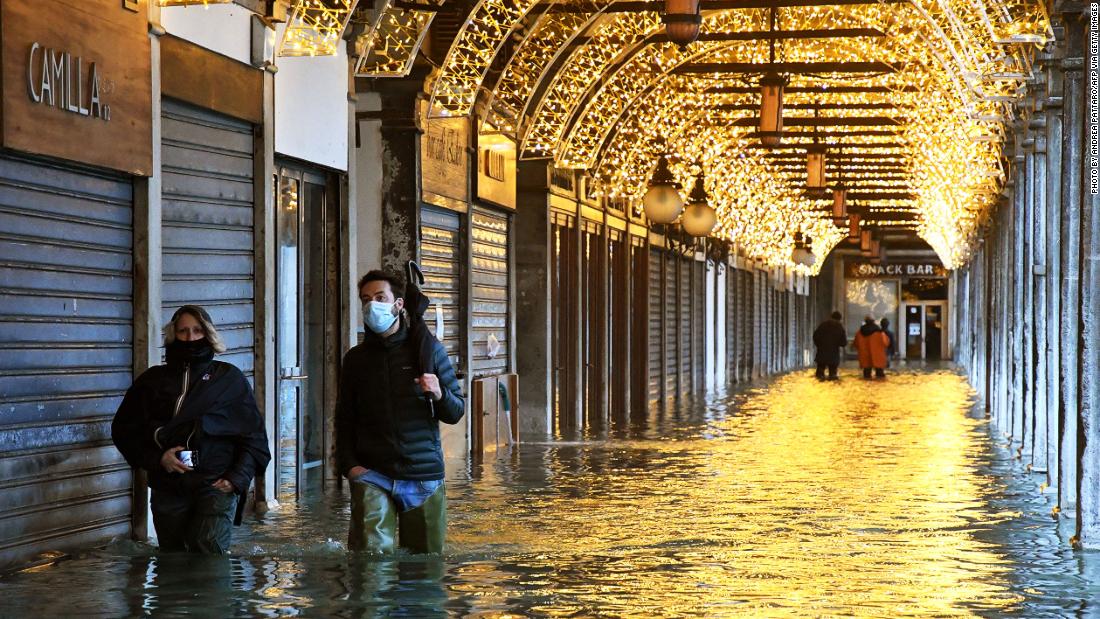 (CNN) – It was an event that was never supposed to happen again.

First tested in adverse conditions, their successful spread kept the historic center dry for the first time in the city’s history. It meant that the devastating 2019 floods – which caused more than a billion dollars in damage to the city – must be a thing of the past.

In the two months since its introduction, at the start of the traditional flood season, the barrier system, known as MOSE, was successfully activated five times – including for three days last week.

But on Tuesday, the barriers were not lifted, and the city was flooded again.

St Mark’s Square, one of the lowest parts of the city, was particularly hard hit, thigh-deep.

Claudio Vernier, owner of Al Todaro Bar and gelateria and president of Associazione Piazza San Marco, told CNN that it was “a dramatic and unexpected event, and one that we thought we had put behind us”.

He said, “We lived through it with great anger.”

“It’s harmful both economically and morally, and it could have been avoided. We know MOSE exists, we know it works, and it wasn’t used.”

St. Mark’s Byzantine Church, which dates back to the 11th century, suffered “massive damage,” according to Carlo Alberto Tessarin, a member of the Saint Mark’s Procuratorate, who oversees the church.

Tell Local newspaper Il Gazzettino They were in a “terrible situation” and that the church “could not bear this further flood.”

“We are very much underwater, the damage is serious,” he said.

The church is still recovering from last year’s flood, as the salt water eroded from it in its marble-clad interior. Even when a flood dries up, the marble absorbs salt, which can spread up to seven meters (23 feet), degrading the stone as it travels.

“The basilica is one of the most important works of art in the world, and it is being destroyed,” Vernier told CNN.

The waters were high in St. Mark’s Square

Until December 2021, MOSE is officially in the trial stage and, as such, is under the jurisdiction of the Italian state.

Once completed, the controls will be handed over to the Venetian authorities, but over the next twelve months, every time a high tide is anticipated, they must request that the barriers be activated by the national government.

The lowest parts of the city, such as St. Mark’s Square, are built just under a meter above average tide level. This means that it begins to flood when the tide is only 90 cm (35 in) above average. The basilica’s vault overflows to a height of only 65 cm (25 in).

The devastating flood last year was 187 cm (77 in) above average.

When city authorities take charge, barriers will be raised when the tide reaches 110 cm (43 in) above average – a level that already sees 12% of the city underwater.

But while it is in the testing phase, it will only activate when the tide is projected to break 130 cm (51 in) above average – by which time nearly half the rifle is already underwater. At this point, while it may be a centimeter or two in the upper parts of town, Piazza San Marco is already knee-deep.

The weather forecast is inaccurate

The raised walkways were almost covered by water

On Tuesday, the tide reached 138 cm (54 in) above average – well above the level at which the barriers must operate.

But the weather forecast only predicted a span of 125 cm – just two inches below the level at which the barriers are automatically lifted. The system has not been activated.

As the weather worsened, city authorities sent alerts to residents warning them not to prepare for the floods. The barriers take several hours to lift, and by the time it became clear how high the tide was, it was too late to take action.

In this case, half of the city was submerged, right up to the raised lanes of St Mark’s Square, which usually juts out at lower flood levels.

Vernier is convinced it was the wrong decision, even then.

He said that “Italy is witnessing bad historical and unpredictable weather at the moment,” noting that the authorities had to take precautions to raise the barriers.

“It’s set on the basis of the weather forecast, and there are no perfect weather forecasts. Five centimeters (two inches) can make a big difference, cause massive damage – and that’s what we saw yesterday.”

Wish for the best, prepare for the worst

However, he spent most of Tuesday afternoons lifting furniture and possessions off the floor, mopping up after he entered his apartment about 2 cm (less than an inch) of water.

“Although this does not sound like much, it does mean that you must first lift everything and make sure that nothing is on the ground,” he said.

“Then you have to wait for the water to come in, wait for it to come out, and then clean inside for hours – you have to clean the apartment over and over again.

“Then you wait for it to dry, and then just drop your belongings. You lose an entire day, just to be able to stay home.”

However, Fagarazzi is still a believer in MOSE. “I trust it 100%, but it won’t stop climate change and it doesn’t solve all of Venice’s problems,” he said.

“We had hoped so [the events of last year] It will never happen again, but since the mousse wasn’t finished yet, we knew it could. The people of Venice should hope for the best but prepare for the worst. “

We cannot deal with another person

Shops closed as people struggled to move around the city

Water rises [flooding] It has always been a part of life in Venice. “Although events like yesterday are not fun – they cause damage and waste time as we have to lift everything off the ground – the Venetians know how to handle it.

“What we could not bear would be another severe flood as we saw last year.

But it does confirm that flood barriers are not the only thing needed.

She adds, “In addition to the well-known phenomenon of local community displacement, it is known that mass tourism exacerbates the impact of climate change, and it is urgent that we work to change it now.”

Vernier says that when the MOSE was planned for decades, it was estimated that it would need to raise whenever sea level reached 110 cm (43 in) above average – which happened at that point several times a year.

“Now with the worsening of the climate crisis, the water level is always higher, and we see this kind of tide 20 times a year,” he said.

Even higher areas of the city, such as the main road on the Strada Nova, were inundated

With more bad weather expected over the next few days, the flood barriers were lifted overnight.

In the meantime, the Venetian authorities are seeking to have a greater say in the decision to lift the barriers.

He added that there is an urgent need to “shorten the chain of command”.