Pedro Castillo: 5 key messages from his inauguration speech as President of Peru 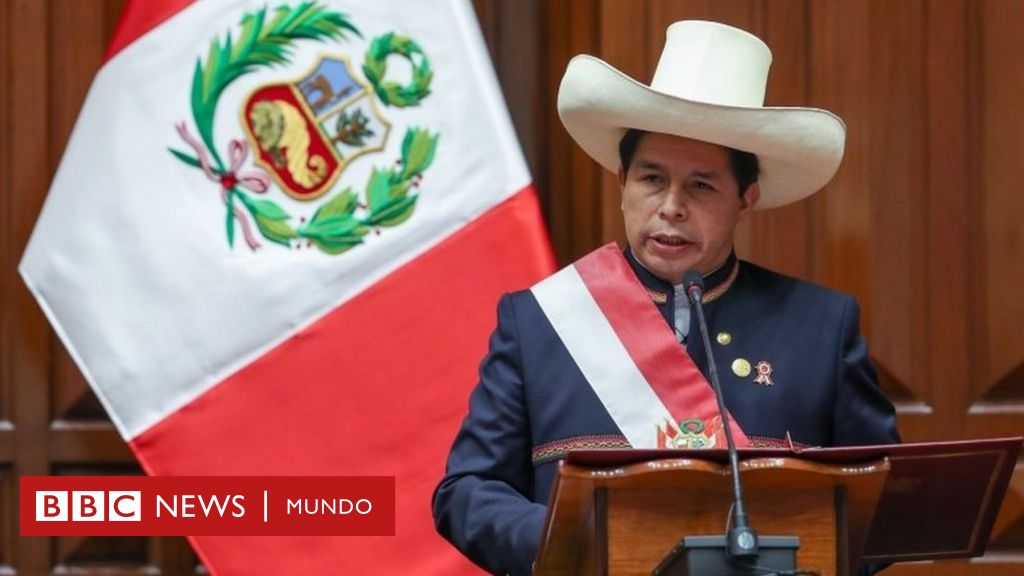 Pedro Castillo, dressed in a navy embroidered suit and his traditional hat, arrived at the Peruvian Congress on Wednesday to take over the country’s presidency.

“I swear to God, my family, my brothers and my sisters, the peasants, the fishermen, the teachers, the professionals, the children, the youth and the women that I will take office in the constitutional period 2021-2026. I swear by the peoples of Peru for a country free of corruption and for a new constitution,” Castillo said as he took office, with his right hand on the book holy.

Here we tell you some of the key messages of the discourse with which the Castillo era began in Peru and which also began on the same day that Peru celebrates the bicentenary of its independence.

1. A plan to change the constitution

The Magna Carta in force in Peru was issued in 1993, during the government of Alberto Fujimori, months after this president dissolved Congress in the episode known as the “self-coup”.

One of Pedro Castillo’s main proposals during his presidential campaign was to change that NSconstitution He did it again on Wednesday.

“One of our main political flags, now the flag of the majority of the people, is to hold a Constituent Assembly,” Castillo said during his first message to the nation.

But the current Peruvian constitution does not provide a mechanism for convening such a council, so it must first be reformed and approved by referendum.

“We will insist on this proposal but always within the framework of the law (…) a declaration that we will present to Congress, while strictly respecting the process, a bill to reform it,” Castillo declared.

If the idea of ​​reforming the constitution to convene a Constituent Assembly flourished, Castillo declared that this body should be “Plurinational, popular and gender-equal”.

During the presidential campaign, one of the concerns of Castillo’s critics — who ran for the Peruvian Liber, a party that defines itself as a Marxist-Leninist — was that it would not respect the savings or private property of Peruvians.

In his letter on Wednesday, Castillo referred to the “story that we want to confiscate the savings” and said it was “completely false.”

“We will not do any of that,” the new president said. “We want the economy to maintain order and predictability, which are the basis of investment. And people’s property acquired with effort is guaranteed by law (…)”.

but nevertheless, It stated its intention to make changes to the economic model.

“The pandemic has made it clear that criticisms of the (economic) model were legitimate and valid. Today the population is demanding change and is not ready to resign. Is it true that these changes mean jeopardizing the achievements of past decades? No, yes, it is possible to make these changes responsibly and respecting private property, but Putting the nation’s interests first.”

He also said, “We want to end the excesses of monopolies and alliances that charge large sums of money for basic services such as gas and medicine.”

3. Changing the seat of government

Castillo announced that he would no longer perform his duties as president from the Palace of Government, the seat where the executive had traditionally operated during republican life in Peru.

“I will not rule from the house of Pizarro,” said the new president, referring to the name usually given to the Government Palace of Peru, in honor of Francisco Pizarro, the Spanish conquistador.

“We must give up colonial symbols. We will give this palace to the Ministry of Culture for use as a museum,” he told King Philip VI of Spain, who was among the guests at the opening ceremony.

He also said: “The three centuries in which this area was under the possession of the Spanish crown allowed it to exploit minerals that helped the development of Europe, largely thanks to the labor of our ancestors.”

One of the most famous aspects of Castillo is his past as a Rondero, or a member of the Peasant Tours, some of the community advocacy organizations that have worked in regions of Peru since the 1970s and are dedicated to administering justice and solving all kinds of problems. in their jurisdictions.

The governor spoke about these groups on Wednesday.

“We must expand the Ronda system in Peru, which is nothing but the organized population. We promise to train them where they do not exist and to integrate them into the citizen’s security system,” Castillo said.

Castillo also said that “foreign criminals will have 72 hours to leave the country,” although he did not indicate any specific nationality.

You can now receive notifications from BBC Mundo. Download and activate the new version of our app so you don’t miss our best content.