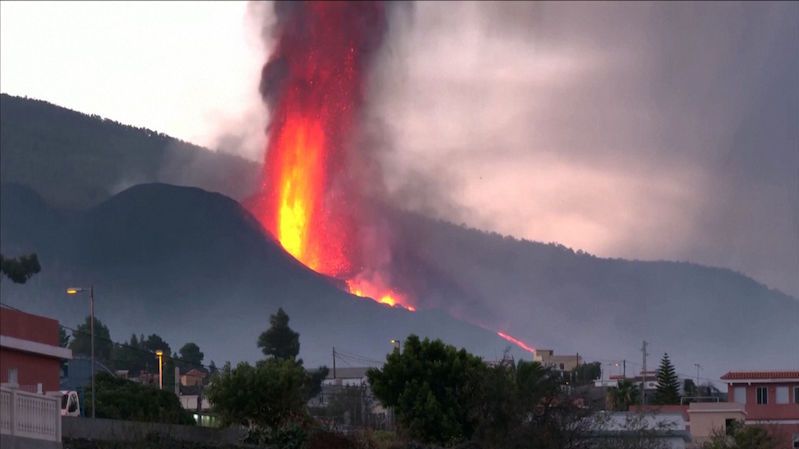 The formation of the first two islands, Fuerteventura and Lanzarote, began 20 million years ago. By contrast, El Hierro and La Palma, where the volcano erupted on September 19, are the youngest of the islands, being 1.2 million and 1.8 million years old, respectively. El País writes that the hot spot is still under it, which is why these islands contain active volcanoes that are widening their surface.

In 2011, a magma reservoir formed a submerged volcano on El Hierro Island, which almost reached the surface. In this way all the Canary Islands were formed, which are in fact giant volcanoes.

The oldest islands will eventually disappear

For example, La Palma measures 6,500 meters from the ocean floor, which is a few hundred meters lower than the highest peak in South America, Aconcagua. On the other hand, the oldest islands of Fuerteventura and Lanzarote shrink due to erosion and eventually disappear completely below sea level.

“The La Palma eruption is without a doubt the most devastating in the history of Spain,” said 79-year-old geologist Juan Carlos Carracedo, who has devoted his life to studying volcanoes in the Canary Islands.

Since the Castilians conquered La Palma in 1493, seven more volcanoes have been recorded, the lava of which eroded homes, crops, and ports during volcanic eruptions. However, the impact of these disasters was much less than the current explosion, as the island was less densely populated and without economic drivers in the form of banana greenhouses and tourism.

“Even Timanfaya in Lanzarote did not cause much damage in 1730,” added Carracedo, professor emeritus at the University of Gran Canaria.

The last chapter in the history of volcanic activity

A lava flow from Cumbre Vieja volcano in La Palma has destroyed or damaged more than 1,000 structures since September 19 – far more than has been reported in other eruptions. This is the final chapter in the tens of millions of years history of volcanic activity in the Canary Islands. This phenomenon leads to extinction and creation, because without the volcano, these islands would not have existed at all.

Over the past five centuries, the country has always opened up to the Cumbre Vieja, a magnificent mountain range extending to the south of the island, which is crisscrossed by nearly 30 holes. The lava tongues of most previously recorded eruptions, as now, have advanced along the western slope of Cumbre Vega. Many of them reached the sea, where they created platforms to expand the size of the island.

“The eruption that created the largest piece of land in the sea was from 1949,” Caracedo continued. “They covered the area with fertile land brought from another part of the island and planted banana trees, a tropical plant that grows best at sea level. Therefore (the farms) are currently one of the most productive on the island.”

Volcanologists believe there is a hot spot beneath the Canary Islands, a reservoir of high-temperature magma that is constantly trying to find a place to reach the surface. It causes earthquakes and earthquakes to boil. It’s the same type of volcanic activity that created the US Hawaiian Islands in the Pacific Ocean.

However, the hotspot theory is controversial in some ways, El Pais recalls. By itself, it fails to fully explain all of the volcanic activities in the Canary Islands, such as the relatively recent eruptions on ancient islands such as Lanzarote.

In any case, the activity of the volcanic complex does not end. Lava flows in La Palma continue to increase after another crater collapsed on Sunday, Reuters reported.

Lava from the volcano continues to flow into the sea water, and now it flows from four fissures. Authorities have ordered several thousand residents not to leave their homes due to the emission of toxic gases into the air on the island’s west coast, where lava has been pouring into the sea for several days.

No Comment: So far, the lava has hit more than 1,000 buildings and covered about 338 hectares of land.

Spanish Prime Minister Pedro Sanchez pledged on Sunday that “the Spanish government will help restore the island of La Palma, where the eruption of the volcano has forced thousands of people to leave their homes and destroyed hundreds of buildings.” He stated that the government will agree to help 206 million euros (5.2 billion kroner) for the island, while stressing at the same time that there is no danger to tourists on the island.

The Cumbre Vieja eruption has already destroyed more than 1,000 buildings. About 6,000 people have been evacuated out of a total of 83,000 residents of La Palma. A mass of lava destroyed about thirty kilometers of roads, with more damage caused by banana farmers.

As Peter Brosch, a local expert from the Institute of Geophysics of the Academy of Sciences of the Czech Republic, recently stated on his Twitter, we don’t really know how long the eruption will last. “It can be finished in five minutes, and it can last for days, weeks, months, maybe even years. All the variables are known from history.”

“We are facing a test of perseverance,” the Spanish prime minister said now. “We don’t know when the explosion will end.”