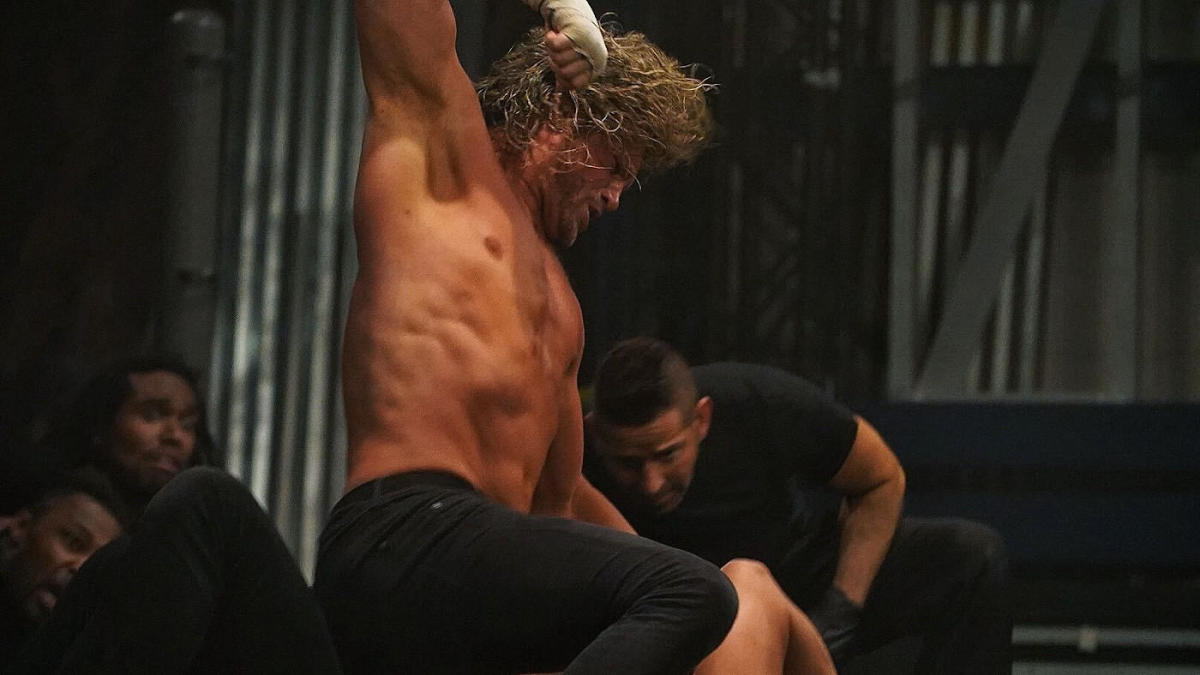 The talk leading up to Monday’s edition of WWE Raw was focused on two things: WWE’s announcement that a new faction would debut and rumors of a “shoot fight” aspect being added to the show. One of those things did not truly happen, the other was a spectacular disappointment and Raw hit a creative low point.

Raw Underground was introduced as Shane McMahon’s show-inside-a-show, featuring “worked shoots” in a faux-“Fight Club” atmosphere that failed to capture the imagination, instead playing out with cheesy, overproduced “fights” in between shots of dancers. By the end of the show, Raw Underground was overrun by The Hurt Business, with MVP, Bobby Lashley and Shelton Benjamin taking out nearly everyone in attendance before McMahon congratulated them and invited them to stay as long as they wanted because “anything goes” at Raw Underground.

As for the new faction, a group of masked individuals were shown throwing molotov cocktails at a power generator, but no indication of who the men were or what their goals are was provided, a a second big disappointment for the night’s most hyped angles entering the show.

Read on for a complete recap and highlights from a very uneven edition of the WWE’s flagship television program.

United States Championship — Apollo Crews (c) def. MVP via pinfall to retain the title: During opening introductions, the lights briefly dropped. Something that happened again as Crews was in the ring, with the announce team blaming the issues on “weather in the area.” Before the match, MVP claimed again to be the true United States champion after Crews was unable to wrestle at Extreme Rules. The lights flickered again as the match started and continued to flicker periodically through the match. After some early back-and-forth, things got a bit nastier with big strikes before MVP was pulled out of the ring by his Hurt Business crew, only for Crews to hit a huge dive onto the three men. Lashley tilted things back MVP’s way by taking Crews out while the ref was distracted. MVP trapped Crews in the corner and hit a big series of elbows before Crews fired back, hitting a big spinebuster for a two count. Moments later, Crews hit the sit-out powerbomb for the win. Lashley tried to run in and lock up the full nelson, but Crews escaped the ring. After the match, MVP claimed the flickering lights made for “unsafe working conditions.” MVP said he didn’t care about Crews’ wife or kids, he just cared about the rematch and he wants it at SummerSlam. This was a solid, if unspectacular, match to open the show. But there are certainly points to be had for ending the “real United States champion” story, even if there’s no reason at all for a SummerSlam rematch. Grade: B-

The Riott Squad def. The IIconics via pinfall: Hosting The K.O. Show, Kevin Owens introduced Ruby Riott to the ring. Riott talked about the frustrations of dealing with “toxic sad broads” like the IIconics — who Owens had ran into backstage and refused to invite onto the show. Riott said the only thing that could have made the moment of scoring her first singles win in several months better would be if Liv Morgan was there to celebrate with her last week, at which point Owens invited Morgan to the ring. Morgan said she was willing to hear Riott out and Owens urged her to do just that, saying he doesn’t know if the crappy things he did to friends in his career were all worth it in the end. Riott apologized to Morgan, and asked for another chance for the Riott Squad to get back together. The IIconics then interrupted, saying they were tired of listening to the two women talk and told Morgan she “should have stayed in the tub.” After Owens asked the technical difficulties — which plagued this segment also — to affect just the IIconics’ microphones, both women slapped him, leading him to invite Morgan and Riott to attack, which they did, setting up a tag match which The Riott Squad won in short order when Morgan scored a quick pin. Grade: C

Drew McIntyre got the better of a war of words with Randy Orton: McIntyre thanked Orton for the lesson he received last week when Orton warned him he would strike, only to RKO the WWE champion to end the show. McIntyre explained that Orton didn’t have to work for everything in the same way as others, instead getting handed everything by being a legacy, also pointing out all the times Orton should have been fired for poor behavior in the past. Orton interrupted, running McIntyre down for not showing the same level of respect he had last week when he laid down the challenge for a WWE title match at SummerSlam. Orton agreed he should have been fired many times over, but he is more valuable than McIntyre will ever be. Orton challenged McIntyre to say something original about him, leading McIntyre to say that Orton represents everything that is wrong with WWE. McIntyre pointed out all the men that reached out to help Orton and asked how many times Orton had done the same thing for young talent that men like the Undertaker had done for Orton. McIntyre then said he would cash in receipts at SummerSlam before kicking Orton’s head off. This was some strong promo work by both men and it helped to go a bit outside the lines of the standard lines of “Randy Orton had everything handed to him” by calling out Orton’s past bad behavior and playing on the idea that Orton has never helped anyone get to the next level. Grade: B+

Kevin Owens was confronted backstage by Ric Flair: Flair told Owens he was becoming too much of a guidance counselor lately. Owens said he was just trying to be a locker room leader unlike Randy Orton. This all led to Owens throwing down a challenge to face Orton next week on Raw.

Nia Jax received a suspension for striking a WWE official, struck a WWE official again: Jax was out to “apologize” for her actions, striking WWE official Pat Buck. She instead called Buck a “runt” and said she was doing her job by taking him out last week, before challenging Buck to a match. Buck turned down the offer, instead suspending Jax without pay. Jax’s response was to lay Buck out with a headbutt before kicking him in the ribs.

24/7 Championship — Akira Tozawa def. Shelton Benjamin (c) and R-Truth to win the title: R-Truth stole Benjamin’s title belt earlier in the night. Tozawa bailed from the ring as soon as the match started, sneaking back in and trying to roll up Benjamin moments later. Benjamin responded by delivering a violent powerbomb to Tozawa and hitting Paydirt on Truth. Tozawa’s ninjas got involved, with The Hurt Business taking them out and allowing Tozawa to hit a senton on Truth to score the win and the title in a short match. Grade: C-

Sasha Banks vs. Shayna Baszler ended in a no contest: Earlier in the show, Baszler punched Banks in the jaw backstage, saying she was tired of waiting for a shot at the title. Banks delivered a slap to the face of Baszler, drawing a smile before Baszler slammed her to the canvas. Baszler physically dominated Banks, slamming her again and locking in an armbar. Bayley provided a distraction, allowing Banks to begin to work over Baszler’s arm. Banks nearly locked in the Banks Statement, but Baszler was able to escape and drill Banks with a big knee. Before much more could happen, Asuka ran to ringside and attacked Bayley, drawing the bell to end the match despite Bayley not being in the match. Asuka then chased Banks from the ring. After the match, Asuka called for a Raw women’s title match at SummerSlam. Baszler said she’d be rooting for Asuka to win the title, because she wants to dismember her once she has the belt. Banks then interrupted the two and said Asuka could get her title match at SummerSlam if she beats Bayley next week on Raw. This was no-win booking. Banks shouldn’t be losing clean right now, and Baszler certainly shouldn’t take a loss either. So the run-in was necessary, if unsatisfying. Grade: B

Angel Garza def. Angelo Dawkins via pinfall | Montez Ford vs. Andrade ended in a no contest: Dawkins absolutely obliterated Garza, sending him flying into the ringside barricade with a shoulderblock. Garza got fired up after taking a lot of offense from Dawkins, hitting a big dropkick before trying for the Wing Clipper. Instead, Dawkins reversed before hitting a bulldog. Montez Ford was then shown on the floor at ringside and a concerned Dawkins was distracted, allowing Garza to hit a dropkick to Dawkins when he was on his hands and knees for the pin. Ford was good to go for his match, but it was clear that Andrade’s focus was on working over Ford’s head, drilling him with forearms to the face as well as other kicks, stomps and strikes. Ford fired back up, flipping off Andrade’s back before hitting a huge leaping clothesline.

See also  Pat Sajak is getting heated by the "ungrateful" contestant's rift.

Ford fired up and tried to do his trademark rope shake but his eyes rolled back and he collapsed to the canvas. The ref immediately called the match off and he was attended to by medical professionals. Later in the show, Dawkins announced that the doctors believed Ford had been poisoned, leading Bianca Belair to accuse Zelina Vega and her team and a brief brawl to break out before everyone was separated by officials. This is a really hard angle to pull off correctly and without being in poor taste. There needs to be another week for things to develop and see if WWE has more fleshed out ideas for where to go with it, but they’re walking a fine line. Also, a straight match between Ford and Andrade would be tremendous, so losing it was a shame. Grade: C-

Dominick Mysterio took out Seth Rollins and Murphy: Earlier in the night, Mysterio issued a challenge to Rollins for a match at SummerSlam. Before addressing the challenge, Rollins said he and Murphy had “house cleaning” to do, before asking Tom Phillips if he considered himself a professional, pointing out that Phillips was cheering Dominick last week when he attacked Rollins with a kendo stick. Rollins told Murphy to “take” Phillips, leading Samoa Joe to stand up and stop the two from pursuing his colleague. Rollins said Joe “does not want to do this” before Joe responded, “Yes, I do.” Rollins invited Joe to the ring, but as Rollins and Murphy used chairs to keep him from entering the ring, Dominick slid in from behind and took the men out with a kendo stick before hitting Rollins with a double-leg takedown, a 619 and a dive onto Rollins and Murphy on the outside. After the attack, Rollins accepted Dominick’s challenge as the young man stood tall in the middle of the ring. Joe’s involvement was fantastic as he always brings a high level of intensity to everything and Dominick continues to execute as well as anyone could hope. Grade: B

Lashley quickly won a fight before MVP said he wanted in on the action as well and took someone out. Benjamin was up next, pummeling the next man up. The Hurt Business members then jumped into the “crowd” and began attacking anyone they could get their hands on. McMahon interrupted and said the men had “proven their point” and were welcome to hang out as long as they like, because at Raw Underground, “anything goes.” Raw Underground was a truly awful idea, executed terribly and not adding a single good thing to the show. Grade: D+