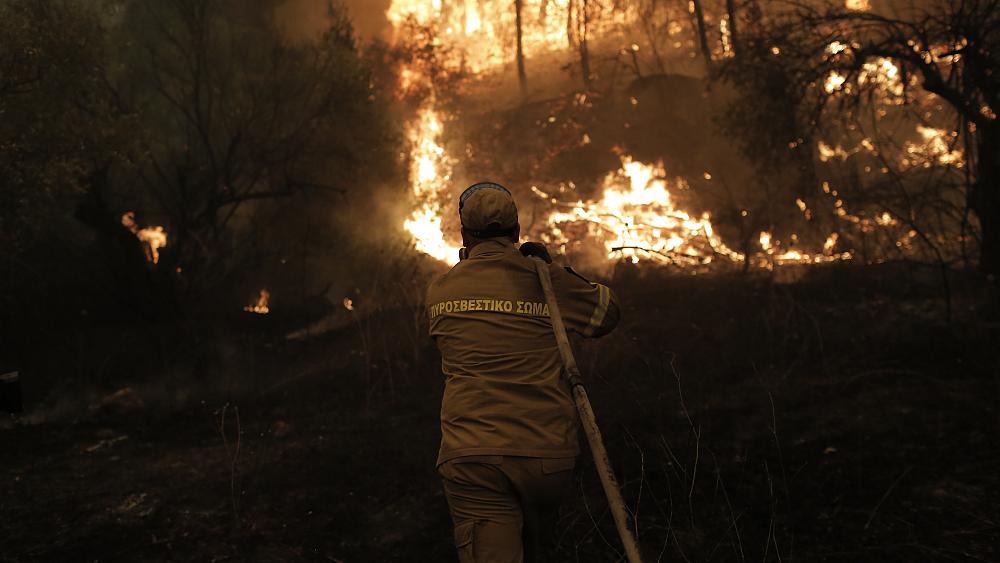 Hundreds of firefighters struggled Sunday to control wildfires on the Greek island of Evia that have ravaged vast swathes of pine forests, destroying homes and forcing tourists and residents to flee.

Evia is located in the northeast of the capital, Athens. To the southwest, is the Peloponnese region, where Hardalias said the situation was stable, adding that fires in a northern suburb of Athens had subsided.

“The situation in Attica (which includes Athens) is better, but we are afraid of fires burning again,” Hardalias said.

On Sunday, rescuers sent a helicopter to transport an injured firefighter from the wooded Mount Parnitha area in northern Athens, where he was putting out a fire.

On the island of Zante in the Ionian Sea, where a small fire broke out, a water-propelled grenade launcher crashed while putting out the fire, but its pilot survived, according to the firefighting services.

Greece and Turkey have been grappling with devastating fires for nearly two weeks as the region experiences its worst heat wave in decades. Officials and experts have pointed to a link between such unusual events and climate change.

The fires have so far killed two people in Greece and eight in neighboring Turkey, while dozens have been hospitalized. While the rains eased the fires in Turkey over the weekend, Greece is still struggling with extremely high temperatures.

The virgin nature and dense pine forests of Evia, which made it a destination for tourists, turned into a nightmare for firefighters. Fires on Greece’s second largest island reduced thousands of hectares to ash and destroyed homes.

Authorities continued to evacuate Evia residents, and Greek border guards announced that 349 people had been evacuated from the island early Sunday.

On the sandy beach of Pefke, young men took part in the rescue operations, using chairs to transport the elderly and the disabled on a ferry. About 260 Greek firefighting personnel, equipped with 66 vehicles, participated in the fight against the Evia fires, with the help of another 200 firefighters from Ukraine and Romania with 23 vehicles and seven aircraft.

A fire brigade official told Eleftheros Tepos newspaper that the heat from the fires in Evia and elsewhere is so intense that “water evaporates from hoses and planes” before it reaches the flames.

Local officials have criticized efforts to fight the fires that broke out on the island on August 3rd. “I no longer have the voice to order more planes. I can’t stand this situation,” the mayor of Mantodi in Evia, Giorgos Tsaborniotis, told the media on Saturday. He added that it was possible to save many villages due to the fact that young people remained in them despite the evacuation orders, as they were able to keep the fires away from their homes.

“How long will this tragedy last? Northern Evia has been burning for six days. Local authorities and residents are calling for help,” former Prime Minister Alexis Tsipras wrote on Twitter, denouncing the lack of air and ground means.

See also  To finance education in 2021-2025, Senegal is committed to pumping more than 20% of the national budget

In response to the criticism, Hardalias said Sunday that smoke, wind direction and poor visibility were all factors that impeded the work of water-spewing aircraft. But a spokesman for the main opposition Syriza party Nassos Eliopoulos said that many fires have been advancing out of control for days across Greece without strong winds. He added that someone would have to take responsibility for the “tragic” devastation.

Hardalias reported late Saturday that 2,000 evacuees had been provided with temporary shelter.

Over the past 10 days alone, 56,655 hectares of land have burned in Greece, according to the European Fire Information System. The average hectares burned in the same period between 2008 and 2020, about 1,700.

Britain, France, Spain and other countries responded to Greece’s call for help, and Serbia announced on Sunday that it would send 13 vehicles with 37 firefighters and three firefighting helicopters. Meanwhile, Greek authorities remain on high alert to prevent further fires.

On Sunday morning, firefighters arrested three youths, aged between 16 and 21, in the coastal city of Piraeus, near Athens, for trying to start a fire in nearby Perama.

In Peloponnese, a 71-year-old man was arrested Sunday in Pylos. Also, Athens police said on Sunday they had arrested a foreigner in a park in Athens who was trying to light handkerchiefs on a tree trunk.