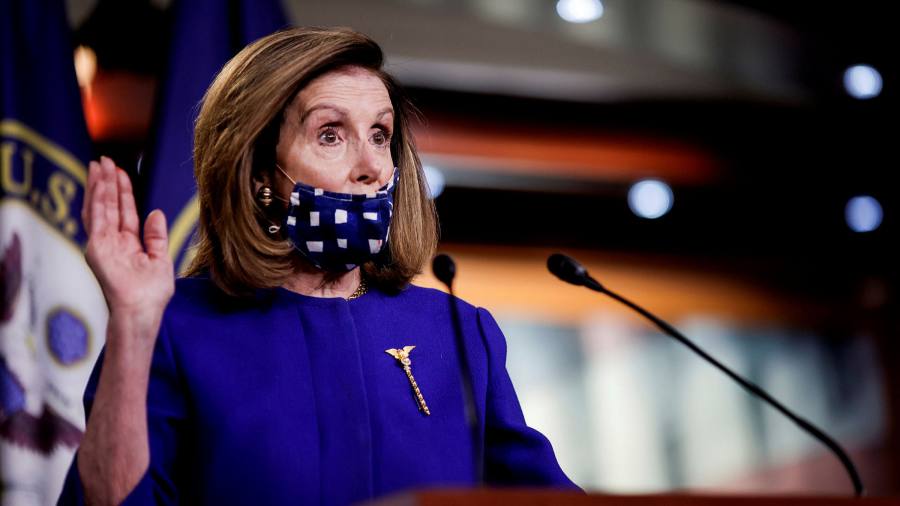 The White House and Democrats in Congress have announced sufficient progress in talks on a new fiscal stimulus package to keep negotiations alive, although the chances of a deal that Congress may pass before the November elections remain slim.

After the last call between Nancy Pelosi, the Democratic speaker, and Stephen Mnuchin, the Treasury secretary, officials were relatively optimistic about the exchange and promised to speak again on Wednesday.

Drew Hamill, Pelosi’s deputy chief of staff, said the 45-minute conversation provided “more clarity and common ground as they neared an agreement” and showed that both sides were “serious” about reaching a compromise. White House chief of staff Mark Meadows told CNBC that the couple have made “good progress, and even more progress today.”

However, he added that there were still some “open items” that needed to be resolved. “We don’t just attribute the difference in language and a few dollars, we still have ways to go,” Meadows said.

Economists and investors are closely following the fate of additional stimulus measures The American economy For several months, he has been amid hopes it could help maintain a recovery from the pandemic shock in the world’s largest economy.

The agreement is expected to reach $ 2 trillion and include a new round of Direct payments For most American families, up to $ 1,200 per adult, plus additional funding for unemployment benefits and small business relief.

The upcoming November elections have increased the political stakes in the negotiations and complicated the prospects for an agreement. Mr. Trump has it Back and forth On the need for additional relief measures – after abrupt withdrawal from negotiations earlier this month, he later urged Republicans to “make big progress” and seek a big bargain. But many Republican lawmakers were skeptical of the need for a big spending package.

Before her Tuesday call with Mr Mnuchin, who is traveling to the Middle East, Pelosi told Bloomberg TV that she felt encouraged about the talks after the Trump administration compromised a plan that includes more funding to test and track the coronavirus.

“I am optimistic because I think we have a shared value – not a lot – but a shared value that they finally want to eradicate the virus,” Pelosi said, adding that this represented a “change” compared to the weekend.

The Democratic spokesperson also pointed to sticking points, saying there were still differences over worker safety and aid for state and local governments.

The White House has been pressing for liability protections for corporations that Democrats have resisted, and has opposed additional funding for cash-strapped state and local governments, which Democrats deem essential to any package.

Pelosi had previously set a deadline on Tuesday night for the Trump administration to reach a compromise, but that timing has now slipped, at least until Mnuchin returns from his international travel.

Any deal reached by Pelosi and Mnuchin is widely expected to pass in the House of Representatives, which is controlled by the Democrats but still faces serious hurdles in the Senate, which has a Republican majority and may not produce enough votes to pass.

According to the Washington Post, Senate Majority Leader Mitch McConnell told fellow Republicans at lunch Tuesday that he had warned the White House against striking a deal before the election, in part because that could stall confirmation. Amy Connie Barrett To the Supreme Court. A spokesman for Mr. McConnell did not respond to a request for comment on the report.

If no deal is struck before the November 3 election, he may lose the pressure to strike a momentum deal, depending on the outcome of the presidential race. Joe Biden, the Democratic candidate for president, has pledged to make the new stimulus measures a top priority if he wins. However, if the former US vice president wins, he will not take office until late January, which will leave the economy in limbo for several weeks until then.

On the 2020 election countdown, stay on top of the big campaign issues with our newsletter on American power and politics with columnists Rana Forouhr and Edward Luce. Register here