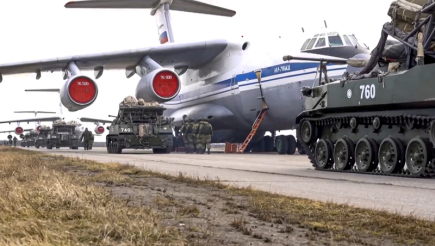 MOSCOW / KIEV – Russian Defense Minister Sergei Shoigu ended military exercises in the south and west of the country today and ordered troops to begin returning to their permanent bases on Friday. This was reported by news agencies. Shoigu announced the decision from the annexed Crimea, where he oversaw large-scale military exercises today. Kiev and the West have watched Russian troop reinforcements on the border with Ukraine in recent days with concern.

A few hours after the start of today’s maneuvers in Crimea, the Russian Defense Minister said, “The forces have demonstrated the ability to provide the country with a reliable defense. In this regard, they decided to end the counting operations in the southern and western military circles.” . The forces are scheduled to begin returning to their permanent bases from Friday and completing the transfers by May 1.

Ukrainian President Volodymyr Zelensky welcomed the reduction in the number of Russian armed forces on the border with Ukraine. “The reduction in the number of troops on our borders reduces tensions proportionally. Ukraine will continue to be vigilant, but it welcomes any steps that mean reducing the troop presence and calming the situation in Donbas,” the president wrote on Twitter.

Reuters and the Associated Press noted that it is not entirely clear from the announcement whether the troop withdrawal order applies to all forces that Moscow has moved to the Crimea and southwestern Russia. The Associated Press also wrote that the defense minister has ordered that some weapons be kept in the west of the country for the upcoming military exercises, which are scheduled to take place this year. They are to remain in the Bugonovo military training area in the Voronezh region, about 160 km east of the Ukrainian border.

Kiev has long been sounding the alarm about an increase in the number of Russian troops on the border with Ukraine. A few days ago, Ukrainian Foreign Minister Dmytro Kuliba said that Russia will soon deploy more than 120,000 soldiers on the border with Ukraine, and called on the West to impose new sectoral sanctions on Russia. The Pentagon said that Russia is focusing its influence in the region more than it was seven years ago. European Union Foreign Minister Josep Borrell said this week that Russia has deployed an unprecedented number of more than 100,000 troops to the Crimea and the borders of Ukraine, threatening further escalation between the two countries. European Union foreign ministers called on Moscow to withdraw troops and reduce tensions in Ukraine. Moscow responded by saying that it could have an army where it saw fit and that it was not threatening anyone. On the contrary, he talks about provocations from Western countries.

More than 10 thousand soldiers participated in the exercises that took place today in the Crimea peninsula, Russian news agencies said, referring to the Ministry of Defense, and they had more than 1,200 weapons and other military equipment and dozens of warships at their disposal. According to the Russian ministry, various units of the army, including the Airborne Forces and air defense units, participated in the exercise. According to the Associated Press, Moscow is showing its strength at a time of increasing tension between Russia and Ukraine. Due to the maneuvers, Russia previously closed part of the maritime and airspace in the Black Sea around the Crimea. Ukraine and the United States protested.

The situation in eastern Ukraine has recently deteriorated. Kiev and the pro-Russian separatists in the east accuse each other of violating the ceasefire and increasingly frequent clashes. Conflict escalated in eastern Ukraine after Russia annexed Crimea in 2014 and supported an armed uprising of pro-Russian separatists in Donbas. The West responded with sanctions. The major fighting in eastern Ukraine subsided after the peace agreements were concluded in Minsk in February 2015, but so far the ceasefire has not been fully maintained and the political solution to the conflict has not moved in practice.