The highlight of BER: a break in the “room of silence” – culture 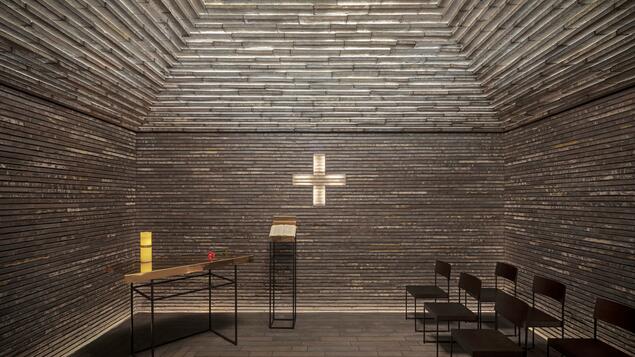 Hidden in its heart, exactly in the central axis of the entire airport in Terminal A, Berlin-Brandenburg Airport is a special architectural gem, the ‘room of silence’. The architects of the GMP were able to tackle an entirely different topic with it, which is the spiritually transient place between heaven and earth in the physical transit space between earth and sky.

The airport is also a place for existential frontier experiences and extreme sensations through vibrant traffic flows, information flows and cacophony, frantic rush and nervous reaction. For some people, the airport is also a place of existential hardship, as they encounter disturbing new things, arouse their fears, and experience weirdness, abandonment, or uncertainty. Or where they have to fight with a fear of flying.

These people should give a presentation of a chapel or prayer room, a fading point for a break, where they can find peace and inner contemplation.

Today it is no longer just a sought-after Christian church, perhaps an ecumenical one, but the growing number of people of different faiths must also be taken into account. Therefore a neutral prayer room is usually called a “room of silence” and should be open to all those seeking a rest.

In BER, the “room of silence” is in the middle

In the process of operating the airport on a large scale, the prayer room is one of the “service rooms” and “not for profit”, where secondary uses for the public can be found, somewhere in the belly of the terminals, so it is not easy to find it often. . Not so in BER.

Since the station is divided into different security zones, there are three options for location: in the publicly available area on the “land side” or on the “air side” in the security zone. There is also a distinction between the “Schengen area”, from which flights to the European Schengen area depart with freedom of travel, and the additionally designated area “non-Schengen area” with strict personal controls and visas, which is already foreign in terms of passport.

At BER, the silence room in the public area is easily accessible to all visitors and especially to airport staff, and it is also used frequently. However, transit travelers need a visa.

The airport church is not a separate building, it is a house within a house, an old worship space deep in a functional high-tech building.

The room is reminiscent of a crypt

Whoever walks through the door finds himself in another world, in a cave-like atmosphere, resembling an early Christian crypt without windows, with a dim light, illuminated with eyes in the cellars with peak light.

In a small square reception room, a candle burns in a central niche under the word “silence” thrown into a raw in six different (European) languages.

There are actually two silence rooms: on the left the Christian church, and on the right the multi-religious and neutral prayer room. A thin bronze cross barely visible in the antechamber on the left and a square in the cosmic circle in the right antechamber indicating the path to the cell in question.
The church interior is sparse. In the center of the antechamber on a metal frame, a gilded earthenware bowl glows like a baptismal line, it is a piece of the Lifetime Porcelain series “Million” by Berlin-based artist Uli Aigner.

In the prayer room there are chaise longues, the equally simple ombo box with a polished bronze desk and the altar with a bronze top was designed by project manager Hans-Joachim Paap of GMP. An altar cross was cut into the wall as a backlight obliquely.

Actually there are two rooms

The multi-religious space on the other hand still seemed empty. World circle with a bronze rose soaked in the ground. It shows the faithful directions to Mecca or Jerusalem. Someone put a picture of Kappa temporarily on a chair in the corner.

In the alcove there are some prayer rugs for BER employees. Muslims are the most frequent users of the room.
Simplification, by pushing it to the extreme, helps avoid any distraction and encourages meditation. The architecture creates a stoic and suggestive atmosphere. It is just bricks and light. Earth and sky, the theme of the airport, are at the same time the subject of the silence room.

The roof of the pyramid with an eye

The original flat shape raw bricks form the floor, wall and cellar at the same time. The “vaults” above the square rooms are intertwined pyramids on the inside, “faux vaults”, like the layered stone roofs of the Trolleybullian. But appearances can be deceiving.

The stones of this high-tech old style are individually suspended on a steel frame. The hinges are open and backlit with LED lights. The roof of the pyramid mysteriously shines from each joint, and appears to float.

In terms of building culture, the room is the modern anti-airport program. Resorting to the creations of early Christian and Eastern rooms, awakening memories and feelings lurking in the depths of the subconscious and safety in the womb, or perhaps childhood memories of the services of the Advent by candlelight that evoke a contemplative atmosphere.

In this way the visitor comes to rest and experiences how the peak light falling into the dark cave seems to bring enlightenment into earthly existence.