Stop the heat in the house! Watch the opening of the third season of the treasure hunt legend “The Lost Tomb Save Tomb Robbers” throughout April. 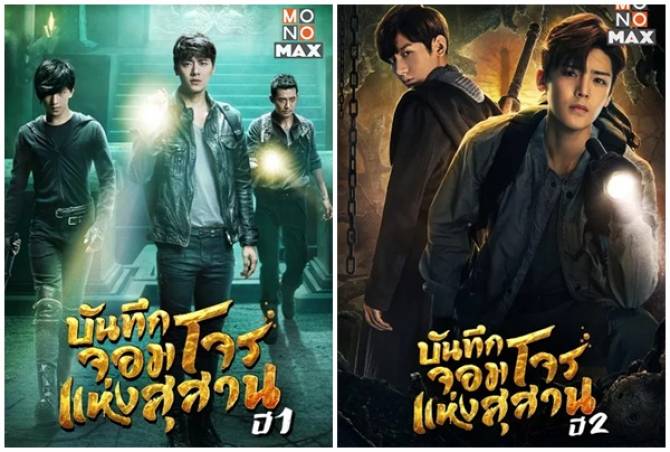 Enter the most famous months of the year now! Makes a lot of people never want to leave the house for sure! This event, “Monomax”, the leading online movie in the Mononex series show, will present a success series based on the legendary dragon novel “The Lost Tomb”. Filled with Thai and Thai subtitles so we can watch three seasons simultaneously throughout April, let’s go!

Written by “The Lost Tomb, Save the Tomb Thief” is an adventure series based on the popular novel. “Notes of tomb robbers” that people in the world of Graveyard read and published talked about in the Internet world under the name “Tao Mu Universe” invested in a series of not less than 50 million baht, and also adapted the actors to suit all ages. And in it, every region will have superstars from China to participate in the show so that it is no less popular, but in general, the story is fun and interesting to follow in every sector, every episode!

Beginning on April 8th, they met “Lost Tomb 1, Tomb Thief Record Year 1”, the start of an exciting adventure legend when Wu lost his descendants from the Wu family. Found a piece of the ancient map, lead him to gather his friends on a journey to a mysterious ancient cemetery full of mysteries, evil spirits and dangers awaiting them! “Li Yifeng”, “Yang Yang” and “Liu Tianzuo” Championships

In the middle of April 15th, open a new adventure and plunge into the depths of the most dangerous oceans !! In “The Lost Tomb 2 Explore with the Note, Season Two of Tomb Thief”, a sequel in which a mysterious character disappears and a strange story about Wu Xie unfolds, Wu Xie begins with an old friend. Solve the mystery, discover the truth again! This sector is represented by “Hou Ming Hao”, “Cheng Yi”, “Li Man” and “Zhang Bo V”.

At the end of the month on April 23, there will be “The Lost Part II of the Lost Tomb Season 1: The Voice of Providence Reunion: The Voice of Wisdom for the First Year” with Wu Xie and Best of Friends reuniting. Many years ago the Three Best Friends were finally reunited !! Along with a new adventure full of obstacles, much more dangerous than before! But this story will become a turning point and prove the friendship of the three gravediggers. This segment is from “Zhu Yi Long”, “Chen Ming Hao” and “Huang Junjie”.

Get ready to enjoy and win the adventures of best friends in ancient tombs in the Chinese series “The Lost Tomb, Save the Thomb of the Tomb”. Complete all three seasons throughout April with MONOMAX (monomax). Z) Watch the end of each episode! Up to 4 private devices can be viewed simultaneously !!! Pay only 129 baht, unlimited viewing for 2 months when applying through www.monomax.me Call for details 02-100-7007