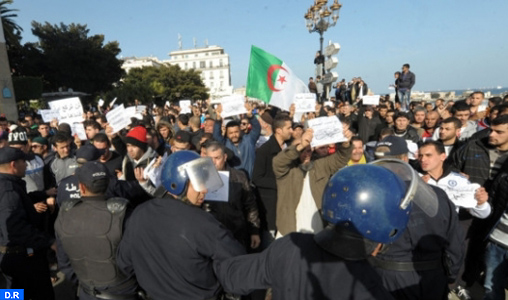 ALGIERS – Hundreds of students demonstrated in Algiers on Tuesday to demand a radical change of the system.

Despite the heat, fasting and repression, these students marched, with the support of citizens, on the 112th Tuesday of the student movement.

On the first day of Ramadan, protesters began their march, which was marked by some clashes and arrests.

As usual, the launch began around 11 am from Martyrs’ Square. Banners were raised and the demonstrators chanted categorical slogans, demanding the departure of the entire political system and the establishment of a transitional period.

The slogans that marked the march were “The student interferes, the system is wiping out”, “the civilian and non-military situation”, “a free and democratic Algeria”, “free press” and “independent justice”.

In response to the arrest of more than 23 demonstrators last week, and then placing them under arrest, the demonstrators are accused of “telephone justice” and demanding “transitional justice.”

In their hunger strike for a period of 7 days, these demonstrators who were placed under arrest are, they said, “a coup d’etat organized by the DRS (intelligence), demanding the release of detainees, especially during this fasting period.

According to the National Committee for the Liberation of Detainees (CNLD), other activists were arrested last week as part of a fierce wave of arrests and arrest warrants for protesters that resumed after a lull that lasted a few weeks.

According to this committee, which monitors the conditions of prisoners of conscience, the defendants are accused of “unarmed gathering and incitement to unarmed gathering.”

READ  The death toll from floods and landslides in East Timor, Indonesia, has risen to 85

These arrests coincide with prison sentences issued by courts against the Hirak.

These arrests and new death orders also came in the wake of the arrest of “poet of the revolution” Muhammad Tjdit and Malik al-Riahi in an apartment in Ain Bunyan after a police search.

These two activists were behind the broadcast of the video clip of the minor Saeed Shetwan, who said he had been tortured. This video, which spread quickly, sparked a wave of discontent in Algeria and beyond.