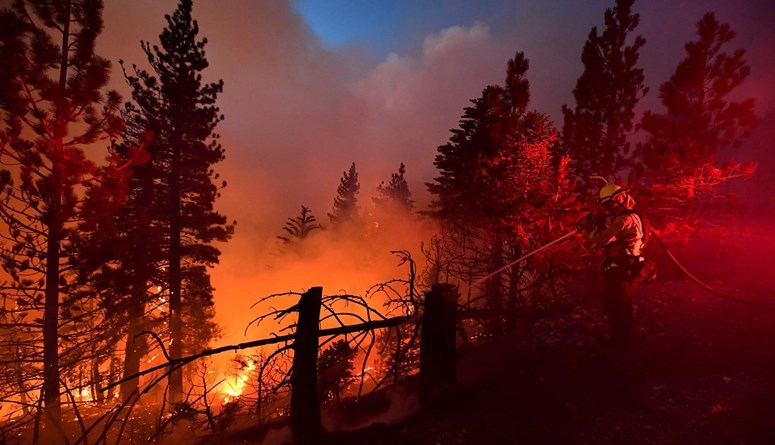 Russian President Vladimir Putin expressed his concern over natural disasters of an unprecedented magnitude this year in Russia, which is witnessing devastating forest fires in Siberia and floods in the south.

During a video meeting with local officials, the Russian president instructed the government to “make every possible effort to help the population of Siberia, whose regions witnessed large forest fires exacerbated by drought, as well as the population of the south, where floods were recorded.”

In Yakutia (Siberia), the coldest and largest of Russia’s regions, fires burned more than 9.4 million hectares, more than the area of ​​Portugal.

Russian scientists and environmentalists concluded that “the current fires are caused by climate change and global warming.”

“All this shows once again how important it is for us to commit ourselves in a deep and systematic manner in the future to a climate and environmental programme,” Putin said.

He continued, “The scale and nature of natural disasters in some areas is absolutely unprecedented,” calling for “addressing environmental issues in a deep and systematic way.”

Putin ordered the authorities “to remain ready to evacuate more residents from areas experiencing fires, especially the elderly, and to provide them with economic assistance.”

Putin asked local officials to “assess the losses caused by the fires and draw up plans for the reconstruction of homes.”

For their part, local officials requested support and economic assistance from Moscow in order to repair the damage caused by these disasters.

“The scale of the fires that hit his region is unprecedented in history,” said the governor of Yuktia region Aysen Nikolaev. And he asked for “support to compensate for the losses incurred by agricultural crops.”

And the governor of the Krasnodar region, Vinyamin Kondratiev, stressed that “in one day his region experienced rain, which usually falls for a year.”

In Crimea, which Russia annexed from Ukraine in 2014, Governor Sergei Akhinov noted that “two people died in the floods and said that more than three thousand people had asked for help from the authorities.”

For years, Putin was skeptical of climate change, and even considered that Russia could benefit from this change.

This year, Putin participated in a summit convened by his US counterpart Joe Biden and voiced support for “international cooperation” on climate change.