Republican leader confirms that despite Trump’s acquittal, he is “responsible” for the attack on the Capitol | international 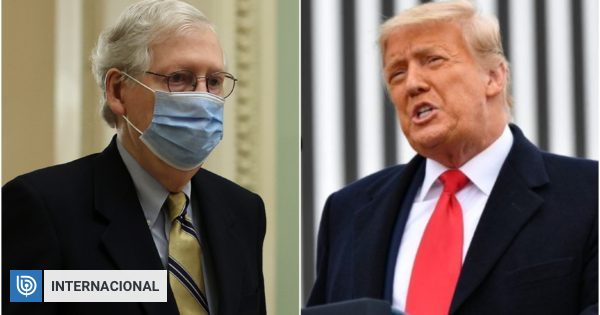 Republican Senate Leader, Mitch McConnell, The accused on Saturday Donald Trump for being “responsible” for the deadly attack on the Capitol, After the vote to acquit the former president during a historic process in the Senate.

“There is no doubt, nobody, about that President Trump is, in fact, morally responsible for causing the events of (January 6). Announce the influential senator.

In the same speech, McConnell justified his vote in favor of acquitting Trump, arguing that The Senate does not have jurisdiction over a previous president.

He said that the attackers acted “because the most powerful man on earth was fed by lies” by denying their defeat in the November 3rd presidential election. “Because he was angry. He lost the election.”

“Former President Trump’s actions before the riots were shameful, disgraceful, and contrary to his duties,” McConnell said in a long speech.

Just before the opening of the final day of the trial, on Saturday morning, this brilliant strategist who had until then been conservative about his intentions indicated it. Would vote for a discharge from the Republicans.

He said it was a “difficult decision,” which certainly had a major impact on the final vote, given his great influence in his parliamentary group.

It would take 17 Republican senators to join the Democrats for Trump to be convicted.

In the end, there were only seven, but they nonetheless marked a marked break with the traditions of this party, generally united in the Senate.

McConnell noted that although he believes Trump cannot be tried in the Senate because he is now a “private citizen,” he can still be sued for his actions as president.

See also  The verse "figs and olives" .. Why did Assad cancel the position of Mufti of Syria?

“He is still responsible for everything he did while in office. “He hasn’t run away from anything yet,” he said.

McConnell has been a close ally of Trump during his four-year tenure, and has not spoken to the former president since he acknowledged the victory of his Democratic rival, Joe Biden, in mid-December.