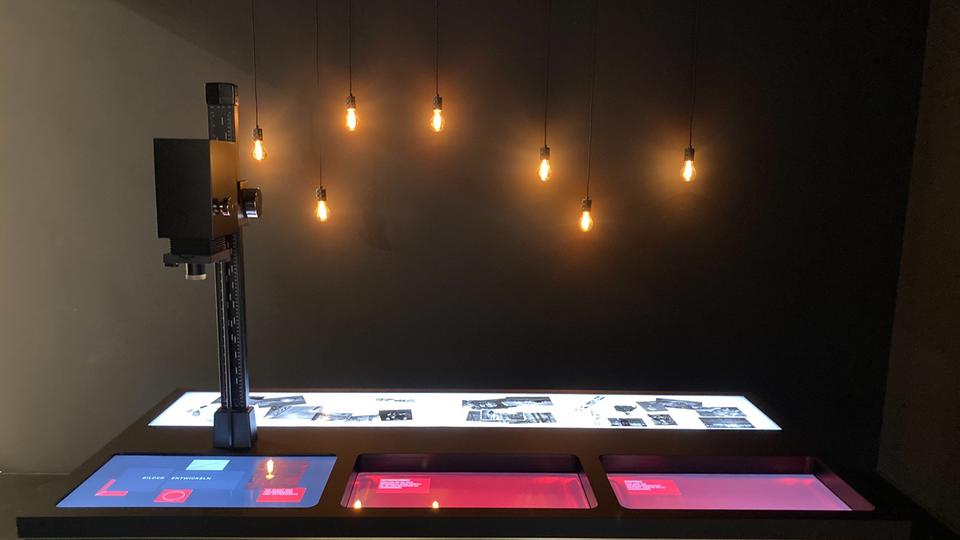 Click Noise Memory and Wind Machine Station: An interactive, high-gloss world of experience has been created for photo enthusiasts at the newly designed Ernst Leitz Museum at Leica headquarters in Wetzlar. I also saw one of the most expensive cameras in the world.

A dark room with a long workbench, red virtual fluids glowing across several consecutive screens. The smell of chemicals is missing, but it’s still clear: we’re in a dark room. How paper is printed from exposed film in the laboratory, this process can be imitated here, at least roughly.

The paper is first placed on a screen in portrait or landscape format, and then the exposure time of the negative is determined. With a swipe of a finger, the image then moves from one immersion bath to another, and after several working steps, a high-contrast black and white image is created. You can save this via an app and even print it out eventually.

Lens, Aperture, Exposure Time – Anyone used to taking decent photos should be familiar with the technology behind it. Today, most photos are taken in fully automated mobile mode, and many photographers never leave the screen. But the enthusiasm for high-gloss photography and professionally designed images has not waned even in the age of social media.

Leica, the manufacturer of Wetzlar cameras, wants to remain a part of this modern world of images, and therefore has completely rebuilt the company’s museum, which opened in 2018: from exhibition to a world of experience. Photography should be tangible with all the senses, analog and digital should be linked together. Visitors can interact interactively with photography: with the technology behind it, with design and aesthetics, but also with history.

Various stations are set up on about 600 square meters of elegantly designed black, white and gold exhibition space. In addition to the virtual darkroom, there is a memory with a camera clicking noise, and visitors can experience the wind machine and photograph themselves with flying hair.

There are also very practical explanations of the basic rules of photography: Where do the lines go? What is the golden ratio? How did the formats that are still popular today come about? Time and time again it’s all about optics and perception. A white room with different surfaces and changing lighting should show how different shades of white can appear.

In addition to the many technical experiences and visual tools, visitors should also be prepared for this: the company’s private museum is of course also a very large Laica showcase, where the history of the company with its ancestors, inventions and cult models is presented on a large scale. The focus is always on her: the Leica, the mother of all compact cameras, made in the center of Hesse over 100 years ago. No one should expect to find products from other manufacturers here either.

A particularly rare exhibition will be on display in the museum until the end of the year: one of the most expensive cameras in the world. It is one of the first so-called 0 Series compact cameras. It comes from a private group. Leica designer Oscar Barnack is said to have photographed it himself in the 1920s. According to the company, only about 12 Series 0 cameras have survived. Recently, a copy was auctioned in 2018 for a record amount of 2.4 million euros.

The first Leica gallery opened in Wetzlar in 1976. There are now 26 galleries around the world in which photo series by world-famous photographers are displayed. In the future, too, there will be high-gloss classic exhibitions on one floor of Whitzlar. Magnum photographer Steve McCurry’s exhibition runs through October 10.

The end of more information

Bernard Kerrer has already designed several interactive museums and galleries with his agency Studio KLV, for example for the Brothers Grimm Cultural Center in Hanau. For him, the symbiosis of technology and photography was especially exciting in this project. “The technology is there, but it’s disappearing again,” Kahrer explains. “Thus, visitors are not only offered great technology, but an invitation to rediscover the world in a playful way.”

Leica Artistic Director Karen Rin Kaufmann is convinced that the company’s headquarters in Whistler is a good location for the museum and will attract an international dedicated audience as well as people from the area: “The museum is aimed not only at Leica enthusiasts who want to see technology down to the smallest detail, but also for young people who can experience things themselves using their cell phones.” There will also be shows for children and school classes in the future. “We are now in the process of creating a concept and establishing connections.”

The end of more information