It seems it was a mistake. Instead of a Ukrainian military plane, they shot down a Malaysian airliner 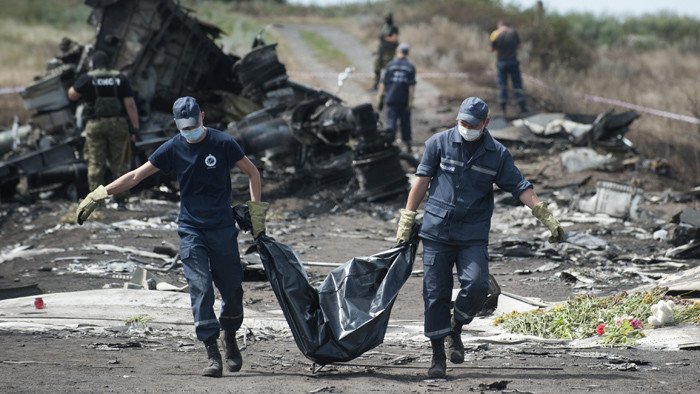 On board MH17 were 298 passengers, most of whom were Dutch.

Rescue workers carry the body of the victim at the crash site of a Malaysian airliner.
Photo: TASR File / AP Photo / Evgeniy Maloletka

It is possible that the people who shot down a Malaysian airliner civilian plane over eastern Ukraine in 2014 wanted to hit a Ukrainian military plane. This was announced by the Dutch Public Prosecutor’s Office on Monday, which began reading the last letter in the case related to the aforementioned Flight MH17 incident, both DPA and Reuters reported.

Three Russians and a Ukrainian are accused of shooting down a Malaysian Airlines plane carrying 298 passengers. However, none of them participated in the trial. One of the Russian defendants, Oleg Bulatov, was represented in court by his lawyer. However, the other two Russians – Igor Girkin and Sergey Dubinsky – have never cooperated with the court and are being tried in absentia.

The Prosecutor General’s Office said in its closing remarks that the plane was shot down by a Russian-made missile. According to Prosecutor Thijs Berger, “the passengers had no chance of surviving.”

Citizens of ten countries were on board, but most of them were Dutch, so the trial is taking place in the Netherlands. The Public Prosecutor’s Office also presented various evidence in court, such as photos, videos, intercepted telephone conversations and witness statements. According to the indictment, these materials prove that the accused are guilty.

The indictment is due to expire on Wednesday. However, a court ruling is not expected until next year. Reuters wrote that if the defendants are convicted, they are in danger of life.
A Malaysian Airlines plane flew from Amsterdam to the Malaysian capital Kuala Lumpur when it was shot down over eastern Ukraine in July 2014, which was controlled by pro-Russian separatists. Reuters recalls that fighting between separatists and the Ukrainian government was taking place in the region at the time.

See also  Before the elections: Putin promised the Russians billions and nominated Lavrov and Shoigu as leaders of the list

According to the results of the official investigation in 2016, the plane was shot down from Ukrainian territory by a Russian Buk missile “controlled by pro-Russian fighters.” Russia has challenged this conclusion, arguing that Ukrainian combat forces are responsible for the tragic end of the MH17.