Even after the devastating result of a recount in Arizona, Trump continues to push for new investigations 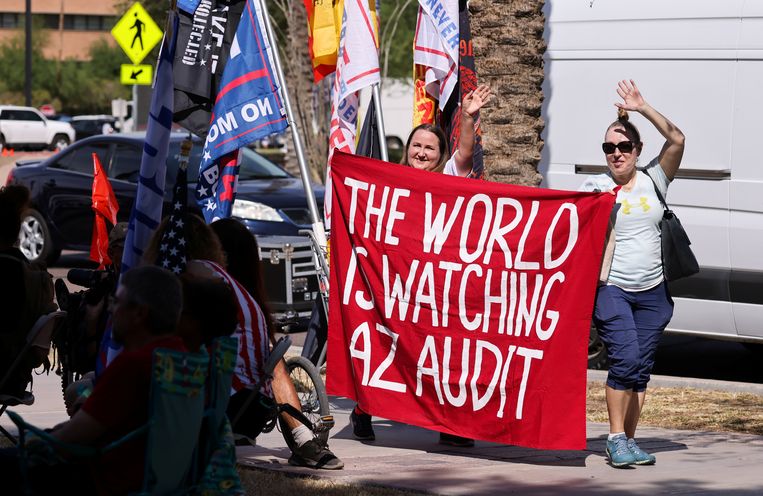 This was supposed to show that Trump did indeed win the election there, but on paper he achieved slightly more votes than his Democratic challenger Joe Biden.

The result of the Arizona recount was a slap in the face for Trump, who has yet to succumb to his electoral defeat to Biden. The result was especially painful, because a recount of more than two million votes in the Maricopa area was carried out by a company, Cyber ​​Ninjas, whose director has sidelined conspiracy theories. The investigation has also been largely funded by supporters of Trump’s claim that it was stolen from the White House, which he calls the “crime of the century.”

After six months of searching for evidence of electoral fraud (the ballot papers were said to contain traces of bamboo, a sign that it had been smuggled from Asia), Cyber ​​Ninjas inspectors found the result to be correct. In fact, according to them, Trump should have had a little more and Biden a little less.

Cyber ​​Ninjas’ final report showed that the entire recount was a “waste of time and money,” according to Arizona election chief Katie Hobbs. Instead, President Trump interpreted the report as evidence that he should have gotten tens of thousands of additional votes.

It was based on the fact that, based on the question marks, Cyber ​​Ninjas raised about 23,000 votes from people who moved to another address just before the election. However, according to election experts, it is quite normal that such late address changes do not show up on the ballot.

The disappointing result of a recount in Arizona did not appear to be a reason for Republicans to end their efforts to question Biden’s election victory. For example, Republican Governor Greg Abbott of Texas, the state in which Trump won the election, ordered a recount in four electoral districts where Biden received the most votes or performed remarkably well.

Trump had asked him to, but Abbott denied last weekend that his goal was to undermine President Biden’s legitimacy. According to him, the intention was only to reconsider the procedure followed.

Some Arizona Republicans are even calling for a recount, and Wisconsin Republicans have imposed an inquiry into the results. It is being carried out by a former conservative state Supreme Court judge who has come under fire from Democrats for saying election officials should present proof of no fraud.

Ask for the secret

An investigation into the findings is also underway in Pennsylvania. The majority of Republican senators there this month demanded all kinds of personal information (such as name, date of birth, Social Security number and driver’s license) from the millions of people who voted in 2020. Democrats have sharply criticized this. According to them, this requirement violates the secrecy of the elections.

Few in the Republican Party would dare raise their voices against the 2020 campaign. Do we want to be a serious political party trying to win elections? Or will we keep screaming about these crazy stories? asked a Republican politician from Wisconsin. Washington Post from.

But most Republicans fear becoming the target of the wrath of Trump, who has turned “stolen elections” into a Republican creed.

Democrats accuse Republicans of undermining confidence in democracy through vote recounts. “Republican senators should be ashamed of their new attempt to undermine our electoral system with a bogus investigation that will needlessly cost taxpayers millions of dollars,” said Tom Wolf, the Democratic governor of Pennsylvania.

According to Democrats, Republicans are also deliberately fanning rumors of electoral fraud to alter electoral rules, making it more difficult for Democrats to vote at the grassroots level.