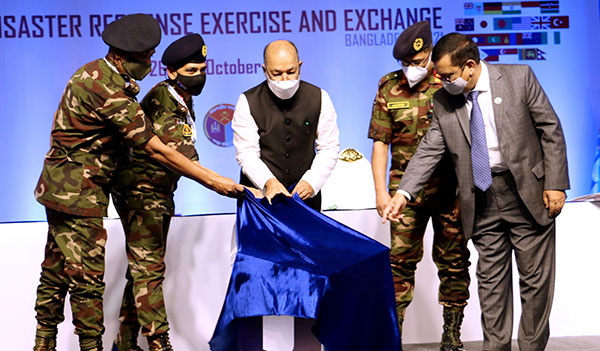 The Bangladesh Armed Forces and the US Army started a joint search and rescue operation after the earthquake. The three-day exercise titled ‘Disaster Response Exercise and Bangladesh Interchange 2021’ opened at the Military Golf Club in Dhaka on Tuesday. The Minister of State for Disaster Management and Relief, Dr. Muhammad Inam Rahman, attended as the chief guest. Chief Staff Officer of the Armed Forces, First Lieutenant. General Walker Oz Zaman, Secretary of the Ministry of Disaster Management and Relief Muhammed Mohsen, and Major General Reginald J.A. Neal of the US Army Pacific spoke. Among the attendees were senior temporary and civilian officials, military advisors and diplomats from the participating countries. This exercise on seismic disaster management has been conducted in Dhaka since 2010. The exercises are being conducted under a joint project of the Ministry of Disaster Management and Relief, the Department of the Armed Forces and the United States Army in the Pacific, according to the appropriate Covid-19 protocol. More than 300 representatives from 147 organizations from 23 countries are participating in the exercise. The countries are Bangladesh, Nepal, India, United States, United Kingdom, Canada, Japan, Bhutan, Maldives, Sri Lanka, Australia, Indonesia, Philippines, Turkey, Fiji, Mongolia, Laos, Kenya, Germany, New Zealand, Singapore, Nigeria, and China. Participants represent various ministries, agencies and NGOs working in disaster management. Besides, students and volunteers from different universities studying disaster management are participating in the exercise. Organizers said such exercises would help increase mutual cooperation at the international level in disaster management after the earthquake. The main objectives of the exercise are to gain a better understanding of the international approach to earthquakes and all disaster management, to increase coordination among all stakeholders to ensure concerted efforts to deal with disasters, disaster management in light of earthquake search and rescue, communications, medical shelters and relief activities.