Chile expels more than a hundred immigrants, most of them Venezuelans 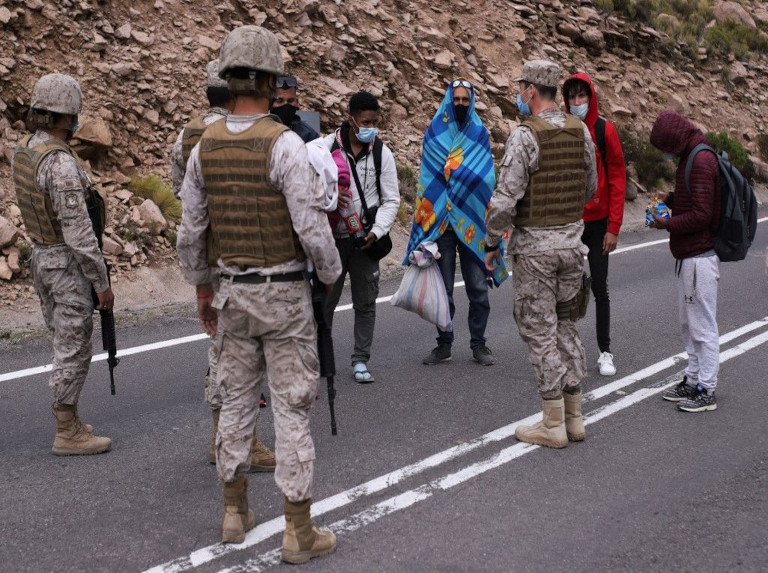 Chilean Interior Minister Rodrigo Delgado said Tuesday that Chile will expel more than 100 migrants, most of them from Venezuela, who have crossed the northern border with Bolivia through unauthorized and irregular crossings.

Delgado announced that “the flight (bound for Venezuela and Colombia) leaves very early tomorrow,” who moved this Tuesday to the small border town of Colcani to check the situation due to the large number of people, most of them Venezuelans, who enter Chile irregularly from Bolivia.

The minister pointed out that a large part of the expulsions were due to “administrative” reasons, after their illegal entry into Chile, and 11 of them were “for judicial reasons.”

Everyone will be evicted in a military plane leaving on Wednesday from the city of Iquique (about 2,100 kilometers north of Santiago), in the region of Tarapaca.

A large portion of the illegal immigrants enter through the town of Colcani, at an altitude of 3,600 meters, as Delgado traveled on Tuesday with the foreign ministers, Andres Alamand, and the defense, Baldo Prokorica, to announce measures to counter the increase. In the migratory flow.

According to local authorities, 3,600 foreigners crossed the northern border irregularly in January, ten times more than last year, and more than 1,500 passed through Kulchin, two of whom died.

After entering on foot via an inhospitable road in high temperatures, they camp in this small town, inhabited by indigenous Aymara communities, and then continue their journey to the cities of Iquique, or Santiago.

“It is very important to take into account the complexity of the situation,” said Alamand. “Today, Venezuelan immigration has become a regional emergency.”

For his part, Minister Prokorica indicated that security has been strengthened with military and surveillance teams “available to support the Carpabineros (police) and PDI (civilian police)” in border control.

Since 2014, nearly 500,000 Venezuelans have settled in Chile in search of better economic alternatives. The Venezuelans became the largest foreign colony in Chile.

In 2018, Sebastian Pinera’s government put into effect the Democratic Responsibility Visa for Venezuelans who want to prove themselves legally, which lasted until January, the Chilean Foreign Ministry confirmed to AFP.

This document allows them to obtain an identity card and facilitates their integration into the country. Nevertheless, the Jesuit Immigrant Service maintains that in recent months this visa application has been “largely” rejected.

“Since the application of this visa until the year 2019, the percentage of those that can be used effectively did not exceed 5%,” this authority said in a statement.