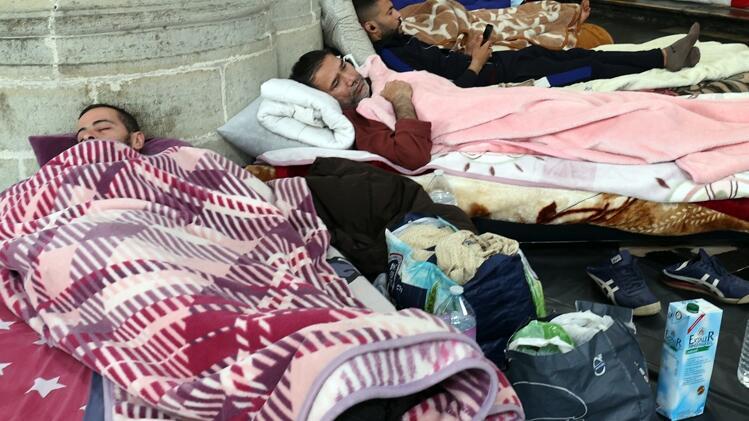 Many of these people are in critical condition, and some of them “prick their lips together” to show there is no going back.

BelgiumApproximately 150,000 “paperless” people have been living in the country for years without legal residency or work documents. Nearly 400 “paperless”, many of whom have been denied residency, have been staying in a church and part of the university campus in the center of the capital, Brussels, for the past 6 months, to make their voices heard by the Belgian government.

If in the last 40 days hunger strike “paperless persons” who do not allow the Belgian state to legislate them and “LeakAnd demanded to be transferred from the position to the legal status.

The status of unregistered people who came to Belgium years ago from Algeria, Tunisia, Afghanistan, Pakistan and many African countries has been a topic of discussion in the country for years. The paperless people, who had previously gone on hunger strikes in 2000 and 2009, had their demands met at that time and were legally included in the system.

The task of these people, who made the same demands and found support from the socialist and environmental political parties, seems difficult this time. Because the Belgian government takes a very strict stance and says that their demands will definitely not be met.

Sami Mehdi, the Belgian Minister of State for Immigration and Asylum, has repeatedly stated that he will not negotiate with the hunger strikers in recent days.

READ  53 years later: The lost wallet is back from Antarctica

Finally, Al-Mahdi said that many “paperless” people were called to leave the country after the trial proceedings, and that if the hunger strikers were exempted, the same path would be opened for the remaining tens of thousands.

Mehdi said, “Many people were asked to leave the country. They didn’t and stayed here and continued to work illegally. Those summoned to leave the country cannot be legalized, and we cannot legalize 150,000 people without documents. There may be individual exceptions, but It is impossible to do this collectively.” He said.

Al Mahdi also called on the hunger strikers to end their protests, explaining that the situation is dangerous and saying, “I hope no one dies. I go to bed every night thinking that someone might die and I can’t sleep. I try to do my best.” Use phrases.

On the other hand, hunger strikers do not give up their actions. Ahmed, a spokesman for the strikers, said they want a proper solution to the paperwork and reorganization of immigration laws in line with the political and economic reality in Belgium.

Speaking with the AA reporter, Ahmed, who did not want to give his last name, replied to Sami Mehdi, “We have been working in Belgium without papers for many years, but sometimes work accidents can happen. There is no law to protect us.. We don’t have social Security “. He said.

Raneem, one of the activists, said they wanted to establish a dialogue with the government for a long time, but no one contacted them.

“We are all unemployed. We cannot pay the rent and bills of the houses we live in. There are many families here, some of them work illegally. They work 13 to 14 hours a day, but they can earn only 30 euros.” He said.

Noting that most of the unregistered people applied for legal status but were refused, Ranm said, “Lawyers objected, but we did not get any result. We are looking for justice. We came here because Europe is the center of human rights and equal justice. But Employers make us work like slaves. In 2021, we are still like slaves.” He said.

The position gives a warning

There are about 230 hunger strikers at Saint-Jean-Baptiste au Beguinage in Brussels, the rest on the ULB campus. Almost all the “paperless” who were allowed to settle here months ago to make their voices heard are now exhausted after 40 days of hunger strike.

The health of most people who spend their day lying on open beds on the ground is now at an alarming level. Doctors who monitor the health of the hunger strikers are also drawing attention to the gravity of the situation.

Cecil Fano, one of the doctors, gave information to an AA reporter, “As doctors, we are here every day. The situation has progressed to very critical levels. It is getting more and more dangerous. There are people who are hospitalized every day.” he said.

Most strikers lost 15 percent of their weight. In particular, it is reported that stomach cramps increase, kidney problems occur, and loss of consciousness begins. It is mentioned that psychological problems also begin, and after this stage neurological problems begin.

Every day, a small number of people whose health condition deteriorates greatly enter the hospital. While the AA team was filming on the ULB campus, another person was taken to the hospital by ambulance by the medical teams.

They sewed their lips

Four of the hunger strikers pricked their lips to show how serious they were.

These four people are continuing their hunger strike under the supervision of a doctor. Liquid supplements are given to people with sutured lips with the help of a pipette through the small opening in their mouth.