UNESCO promotes science in the service of peace (+ photo) 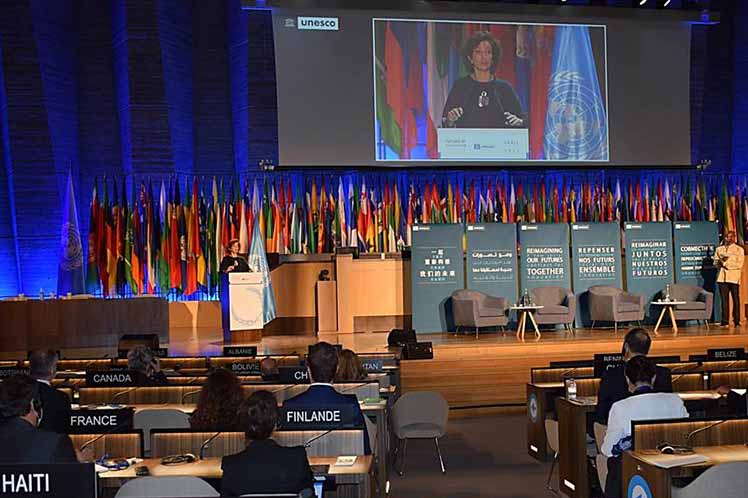 A forum of a United Nations entity’s governance body specializing in issues of education, science, culture and information gathered in this capital between 9 and 24 November, with relevant moments such as the celebration of the 75th anniversary of UNESCO and its re-election. The second term as general manager of French Audrey Azoulay.

The 193 member states adopted the first international framework on open science, with the goal of making it more transparent and available to humans.

Also, for the first time, this concept was defined that focuses on inclusivity and international cooperation, which should in principle allow the use of open licenses and the exchange of data and information, for the collective benefit of humanity from scientific achievements and innovations. Indeed, a formidable challenge.

The Covid-19 pandemic has exposed how open science practices, including access to scientific publications, data sharing, and collaboration, can accelerate research and strengthen links between science policy and society, Azoulay said.

According to the Director-General, the recommendations of UNESCO in this field will promote overall benefit and cooperation, based on common understanding, investment in infrastructure and services, digital literacy, capacity building and promotion of innovative approaches.

The 41st General Conference of UNESCO was also the stage for the adoption of Recommendations for the Ethical Use of Artificial Intelligence (AI), an initiative described here as historic.

Azoulay stressed on Thursday in a meeting with the press that the world needs artificial intelligence rules for the benefit of humanity, and we have taken an important step with this first global regulatory framework, which gives countries the responsibility to implement it at their level.

Recommendations related to artificial intelligence are based on principles such as the protection of human rights, individual freedoms and the environment, inclusion and the promotion of peaceful and just societies.

The regulatory framework includes the requirement for data protection and transparency in its use, prohibition of the use of social signals, mass surveillance and support for UNESCO in terms of implementation and evaluation.

The Director General announced that the recommendations had a follow-up mechanism by the United Nations entity.

At its 41st General Conference, UNESCO also accepted the Paris Declaration, a global call to invest in the future of education, an agreement adopted at a meeting bringing together Heads of State, Government and Ministers from 40 countries.

With regard to the sector, the impact on the teaching of the Covid-19 pandemic has been addressed, leaving 1.6 billion children and adolescents out of the classroom, with the risk that a portion of them, residing in countries of the South, will never be able to return to them. .

Likewise, a report was presented on the future of education, the result of two years of work by a committee led by the Ethiopian President, Sahel Work Swede.