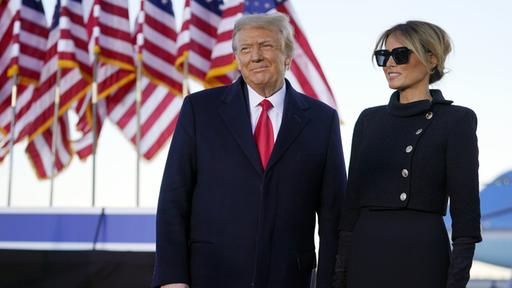 Ignore Trump in the last hours of his term: Before the handover ceremony to his successor Biden, the Republican flew by helicopter. Trump spoke of “four incredible years.”

A few hours before the new US President Joe Biden was sworn in, the incumbent President Donald Trump left the White House. Trump and First Lady Melania Trump took off aboard the Presidential Marine One helicopter from the White House in the direction of Andrews Air Force Base that morning.

Once there, the 74-year-old said his government had done “unbelievable things.” Trump assured his supporters that he would always be by their side. “We love you. We’ll be back – somehow.” He spent an “incredible four years”. “It was the honor of my life.” He wished success to the new government without naming his successor.

Meanwhile, Trump and his wife Melania are on their way to Palm Beach, Florida, where his club resort, Mar-a-Lago, is located aboard the government plane, Air Force One. The Republican has yet to comment on his plans for the future.

Leave a note in the Oval Office

Fox News and CBS have reported that Trump left a note for his successor in the Oval Office of the White House. The content is unknown. In 1989, US President Ronald Reagan established the tradition of leaving a message for the successor to the Oval Office.

It is scheduled to take Joe Biden and Vice President Kamala Harris sworn in at 12 pm local time. Former US Presidents Barack Obama, George W. Bush and Bill Clinton have agreed to attend.

Trump is the first American president since 1869 to walk away from the inauguration of his successor in front of the Washington Capitol. His presence at the ceremony will be in keeping with political practice, but it has no legal effect. Biden is sworn in as the new president even without his predecessor. Participation in the swearing-in ceremony is a symbol of a peaceful transfer of power. Trump refused to approve such a campaign during the campaign.

Trump had already announced on January 8 that he would not participate in Biden’s swearing-in ceremony. Biden had called it “a good thing” and said he and Trump had the same opinion once. Meanwhile, Biden confirmed that outgoing Vice President Mike Pence was welcome.

Pence and outgoing second lady Karen Pence want to participate in the party. In his opening speech, Biden hardly wants to mention his outgoing predecessor, but rather looks to the future. This was announced by two high-ranking representatives of the White House Future Communications Team.

Trump used his last hours in office to pardon more than 70 people, including former chief strategic analyst Steve Bannon, as announced by the White House.

Trump will leave office according to a poll released by CNN on Sunday with the worst poll numbers since his move to the White House: Only 33 percent said they were positive about it. The Republican was also criticized within its ranks when his supporters stormed the Capitol two weeks ago. He could again face impeachment for “incitement to riot”, which could lead to a lifetime ban.

Trump has tried to turn Biden’s election victory over to the storm on the Capitol. The Republican sees himself deprived of victory because of election fraud. However, lawsuits against election results failed in various states. So far, Trump has not congratulated his successor on his election victory.