The number of flood victims in Turkey has increased. Damaged bridges, roads and houses 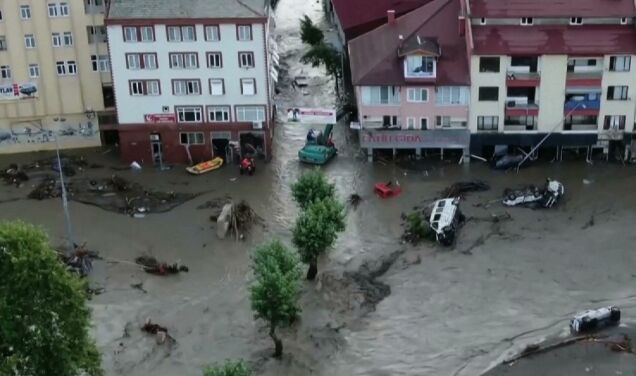 Turkey’s Disaster and Crisis Management Agency (AFAD) reported that evening that 15 people died on Thursday in floods in Kastamonu county and two people in Sinopa county. As added, search and rescue operations are ongoing.

More than 1,400 people were evacuated from the flood-affected areas, some by helicopter and boat.

Bridges collapsed, roads damaged, and electricity was cut off

Some roads were completely destroyed. Five bridges collapsed and many were damaged. The Disaster and Emergency Management Agency reported that there are more than 330 villages without electricity. The element destroyed some homes.

Television showed recordings of water flowing through the streets carrying cars and piles of rubble.

Turkish meteorologists say heavy rainfall, which causes flooding, will decrease on Friday.
The northern parts of Turkey experience flash floods every summer. Last year, at least five people died because of them.

Polish firefighters are ready to help

Since the end of July, the country has also been struggling with raging fires that have destroyed tens of thousands of hectares of forest in the southwestern provinces of the country.

As the commander of the Polish firefighters in Turkey, Junior Brigadier General Grzegorz Borowicz, said on Wednesday evening, the fire was brought under control, in which Polish firefighters and policemen participated. – The fire is no longer out of control. Firefighters said that a large number of firefighting teams assembled at the site managed to contain the flames.

Borowicz reported that the Turkish side asked the Poles if they were able to carry out rescue flights in order to transport the injured from the floods in the north of the country.

We have equipment adapted to this type of activity and rescue workers trained with us. We have four rescuers with us, who, hanging under the roof of the helicopter, are able to pick up the wounded from areas inaccessible to vehicles or people – Borwick noted, adding that the Poles declared their readiness for this type of work.

– He said we are waiting for a possible decision from the local authorities on whether we will be available. He added that it is a place several hundred kilometers away from the current location of the Polish group’s operations.