“The Diary of a Secret Viewer”, from stage boards to comics 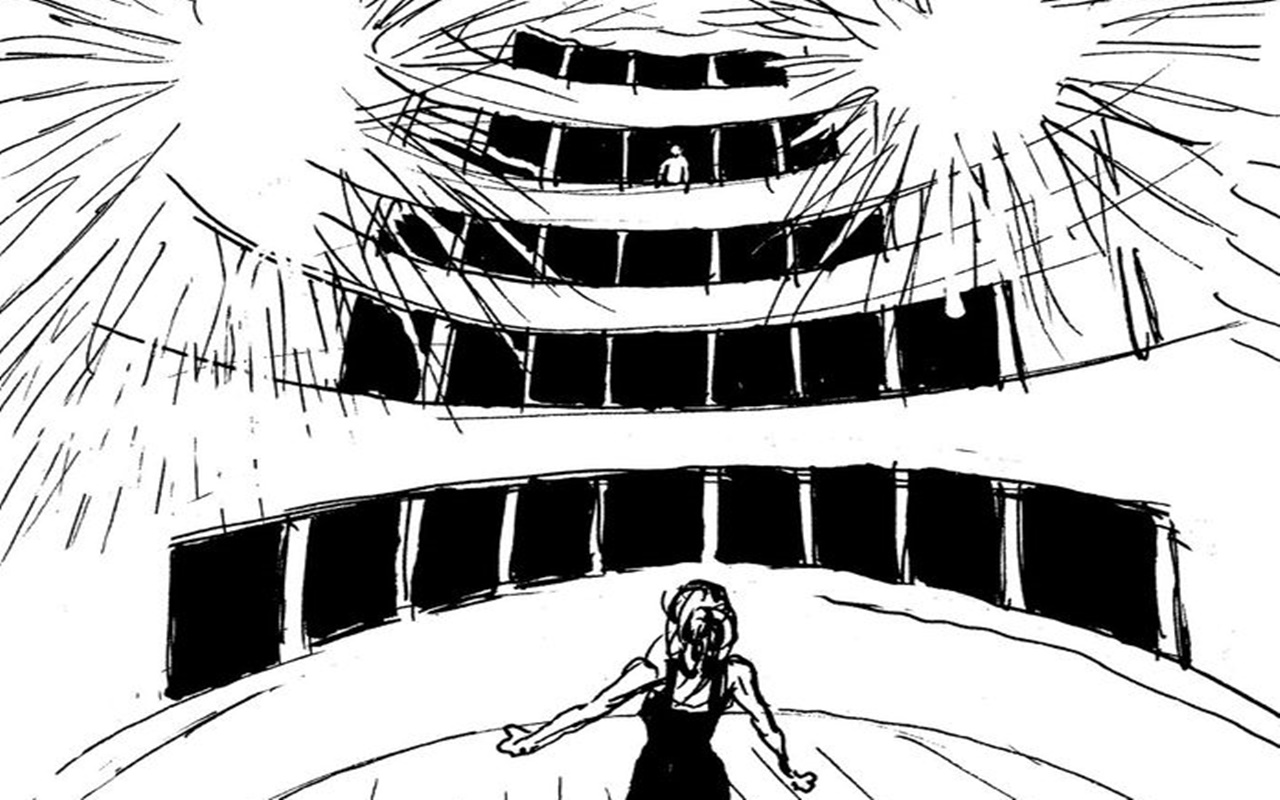 Mother of inventionThe Latins said. In fact, the date of birth of this saying is uncertain, but it is certain that this phrase has not disappeared or rusted at all as it has gone through the centuries. So much so that today in Italian we use the saying “necessity increases intelligence” (Although the English version would be more faithful to the original, which states that “necessity is the mother of invention”). The global crisis unleashed by the Coronavirus pandemic has disturbed, violently, and sometimes tragically definitively, souls, securities and services that tried to respond as best they could, when they felt it. The culture and live entertainment sector in Italy suffered a horrific economic and spiritual blow from the double closures of cinemas, theaters and concert halls.

It’s shattered, but it can definitely be restoredThat thread unites the actor, musician, performer and audience, and gives life to the uniqueness of every living experience. Even for an unwritten, universally accepted definition by the community of artists, theater is “that event that occurs whenever there is a relationship between at least one actor working in a theater space and a spectator of vivo following actions.”

However, cultural activity continuedEven if normality is suspended, not by following the motto “The show must go on” in an educational way but by a commitment to re-establish connections and create new ones by expanding the audience. Since last March, there has been no shortage of live broadcasts on social networks, TV shows, movie remakes and shows, as well as global entertainment platform initiatives, with light or dramatic tones, With the aim of encouraging people or making them think and increasing their awareness. Teatro Stabile dell’Umbria, who had already created last spring the poetic marathon dedicated to compatriot Sandro Pena, “How Loud the Dawn” is, has created a new way of telling theater life and work. Actors, thanks to the comics of the French-Belgian designer and painter Francois Ulielger.

“Secret spectator diary” is the name of this work and this idea that reached the fans on the social channels of the Stabil, and they narrated it through pictures and not the dress-up, under the lights of the stage, To an audience it was elsewhereSomehow connected. The comic is actually conveying on paper, through gestures and words, the long days of staging rehearsal awaiting staging, an atmosphere of waiting for the day of the premiere that was uncertain due to postponements and decrees.

The “War and Peace” was scheduled to start on October 28th. Curated by director Andrea Barraco, in which the cast represents the famous face of cinema and television Stefano Frisi, a complex and structured work that begins with a shorthand work of a novel, Lev Tolstoy’s novel, of 1,200 pages in a theatrical script, an effort that ended the famous Roman playwright and international scale Letizia Russo – veteran, Together with Barako, from the success of the play “The Master and Margarita” with Michele Rondino (Actor of “Young Montalbano”) – It consists of 2 separate and independent offers. To facilitate the spacing, the audience was also switched to a stage, which gave maximum freedom to the actors.

Choral work, tooBecause in anticipation of the show, eight performances, called “Portraits of Sound”, were staged between September and October in various places in Perugia, such as the National Museum of Umbria and the Abbey of the University. The Russian author, even those who appear to be minors, edited every one of the company representatives. The title has attached the eight personal photos.I would like to write in fire linesQuote from a sentence Tolstoy wrote himself when he was not yet twenty, imagine trying to write with his own hand.

The novel War and Peace is one of the most admired and universal works in European and Western culture, along with Dante’s “Divine Comedy”. It is an endless work, just as the expanses of Russia are endless and the sky is blue and metaphysical, which Prince Andrei, who was hit by a grenade, looks up during the Battle of Borodino. It is a new and innovative business, Which transcends the boundaries of the historical novel genre and those of the more intimate and reflexive prose, transporting individuals and their lives and feelings to the great stage of history, where events affect the lives of all characters.

2020 was the year when the entire population of the planet, once again, had to deal with events that affected nearly the same time, were involved in, and affected everyone. History is knocking on the doors of everyone’s storiesUnfortunately, it is caused by a virus that is not easy to contain. Humans have returned to the big stage, or perhaps they realize, in the worst possible way, that they are all there together. Therefore, such an articulated theatrical work, which was inspired by the most universal works of Tolstoy, could not remain unknown and indeterminate.

“Stop everything” It arrived a few days after its debut at the Morlacchi Theater in Perugia. The parade was scheduled for Wednesday 28 October, but on October 25, Prime Minister Giuseppe Conte signed the decree which, for the second time, dropped the curtains and left the lights on in the hall. After the efforts and sincere love of the models and users to reconcile a return to cultural and creative life and safety of health, in an attempt to slow the economic bleeding and keep the rope of will tight and life, a new closure frustrated everything. About 830 thousand workers work in the Italian cultural sector. It produces 1.7% of the GDP (As of 2019) It has long been accustomed to fast work, given that nearly half of the workers in this sector are self-employed. For the world of cultural and entertainment services, books and newspapers, 2020 will close with a hole of 8.5 billion euros, according to estimates by Confcommercio. And it is difficult, even if necessary, to imagine and hope that 2021 will allow us to recover what we lost.

READ  Watch their reunion amid the pandemic - Hollywood Life

But theater is struggling to survive, Olislaeger’s drawings show.

Comedy is many things

This “diary” is not the first collaboration between the painter from outside the Alps and the Umbria Theater Foundation, in fact, for three years the artist has been making covers for the programs of the eighteen theaters in the regional circuit. Olislaeger has a high profile resume “in pencil”, In cooperation with prestigious newspapers and periodicals such as Le Monde, Liberation and Beaux Arts. He is also the author of the comic report and the group “Carnets d’Avignon”, the retrospective comic exhibition of the 2008-2013 editions of the Avignon Theater Festival.

This time he faced an unprecedented task: to narrate the birth of a show. The stress of rehearsals and their repetition, waiting for the premiere in the uncertainty that vacillates between hope and disappointment, mistakes and dead times, the stage is empty of spectators. But it is full of actors, cast, directors and assistants All in the business of making ancient theater machine and craft. A frenzied and stressful small world, undergoing a positive and attractive tension, to the point where the cartoonist notes in one of his drawings: “You draw better in the theater, there is energy, human energy is working and spreading. The whole room is full of them.”

From his distinguished observatory, one stage of the upper ranks, the painter has a full field of vision. All in black and white, to fully emphasize the essence of things, without elaborate use of details so as not to distract the reader. Under it, vertical and vertical lines and strokes move to other horizontal lines and marks. Thin or full lines, never close Acting actors who move and recite their lines As if completing the image to the viewer. White dominates most scenes, often long shots, giving the opportunity to witness current events. In black only the outlines of people and things. A sentence, a jump, a bunch of silhouettes, you yawn as you ditch yourself on the chair for countless repetitions, a sign of fatigue that emerges in the constant stream of energy.

The heroes of this storyboard are ordinary peopleThey are not fictional characters with power but heroes who in everyday life try to do the best they want and should do. There is magic between them, and it is it that raises them in the spirit day after day. It also happens that this magic attracts them a lot, as it happens to the operator who, while shooting rehearsals with a video camera, distracts from the machine and follows with his own eyes the story unfolding under him.

There are times when the brightness of white is, Where static or moving shapes are submerged, they are crushed by the deep darkness of blacks. Dark oppression appears in scenes where dramatic pulsating tension and turmoil ends, overwhelmed and annihilated by the tragedy of the void of loss of life and meaning that affects unfortunate events and affects people. Like a dull pain Unfortunately, this past March, everyone was stunned by the pictures of military trucks carrying coffins.

The author wrote again: “Without an audience, without applause, and always in a rehearsal, it feels like an endless show … there’s something reassuring.” Although infections and deaths are rising rapidly outside of theater All over Europe, in the United States, the outgoing president announces that his rival has rigged the election result, and that the leaders of the European Union, afraid and tired of this crisis, are choosing to take restrictive measures, within the framework of Morlachi’s relationship with brotherhood that mixes with the magic of craftsmanship, which comes from ideas Sublime and come alive day after day with a physical and intellectual commitment.

“Secret Looker’s Diary” is comic and many other things together. Olislaeger’s paintings are also the eyes of the beholder, They are a look deep into the belly of theatrical activity Who generates the stage boards. It is the unveiling of the forms of time, the form of waiting, in which one is now excited with a vital impatience and now with a sad resignation, from ascending on stage in front of the audience and in front of work, where one’s soul is built and deepened. In what you do. Above all, Diario is a beautiful and courageous testimony to the act of resilience and resistance to theater and to the men and women who made it real, tangible and visible in the face of every, even the most disastrous, ordeal.

With these words full of sincere love for art, this story ends, and it is also a hymn to life and I hope to return to live soon: “I love to think that the show continues. With zeal and passion and with all its lights inside. The theater is like the beating heart of a sleepy city.”

Notice: Ads appearing on the page are automatically managed by Google. Even though all the necessary filters are in place, it may happen that you find some bewildering signs. In case, even if it isn’t based on our will, we apologize to our readers.