Social deficits and crossing the ecological frontiers of nations. The failure of neoliberalism 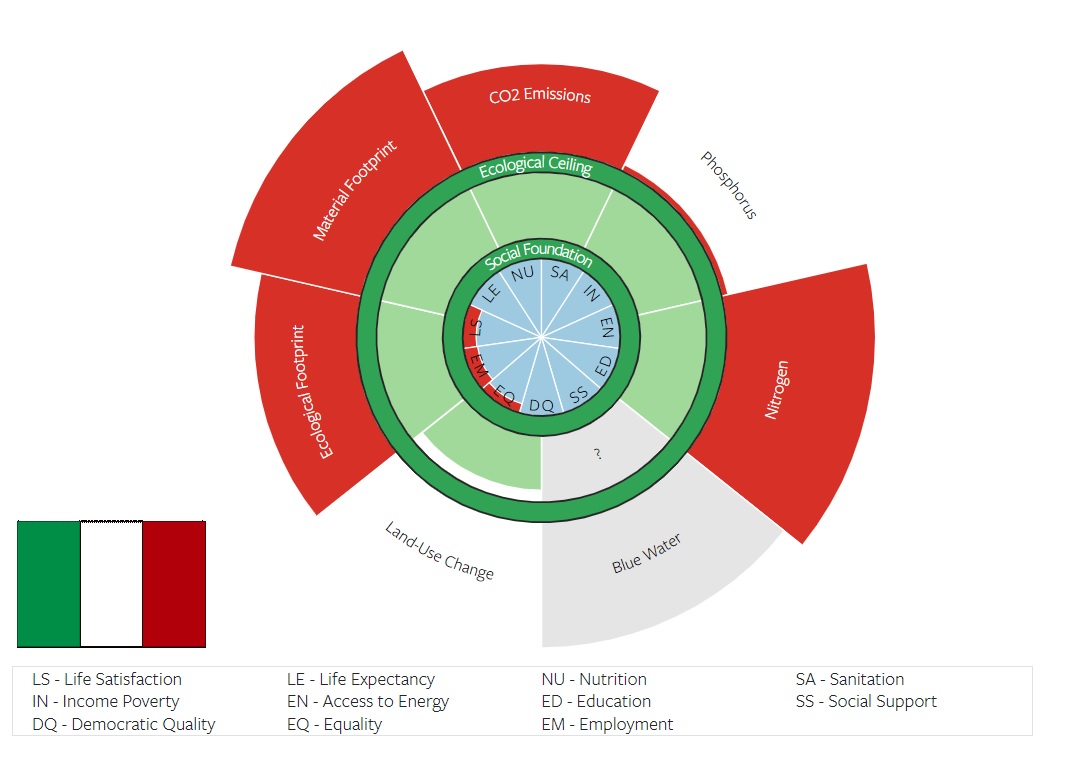 For the past 30 years, no country has met the basic needs of its citizens without over-consumption of natural resources, and no one is on the right track to do so in the next 30 years.

According to the file update studio “Good life for everyone within the confines of the planets”, recently published su Nature Sustainability Give DrAnil O’Neill, Andrew Fanning and Julia Steinberger from the Institute for Sustainability Research at the School of Earth and Environment at the University of Leeds and by William Lamb of the Mercator Research Institute on Global Commons and Climate Change (MCC), “No country currently meets the needs of its population at the level of sustainable resource use globally”.

The study examines and compares national resource use attitudes related to meeting people’s basic needs in more than 150 countries, including Italy that appears to have gone beyond the limits of the planet in terms of physical and environmental impacts, emissions of carbon dioxide, nitrogen, phosphorous, while for land use change, we are still Within limits, and for blue waters there is no data to allow us to make a definitive judgment but we are likely much further than that. Regarding social issues, Italy crossed the border for a fulfilling life. Labor and social justice.

Since the updated study was published in 2018, the most common question directed to researchers has been whether countries have then moved to secure themselves within theDonut of social and planetary boundariesThe new study aims to answer this question. The idea was simple – the scientists say – we wanted to look back in time because current data would allow a wide range of countries to see if anyone is meeting the basic needs of their population within the planet’s boundaries. We also hoped that a better understanding of the countries’ historical trajectories would provide insight into what might happen in the future. We have monitored progress made by countries since the early 1990s on 11 social indicators linked to the United Nations Sustainable Development Goals and 6 environmental indicators linked to the Planet Boundaries Framework, with projections for 2050 based on recent treds.”

National findings on the social and environmental benefits of this large study and comparative work are available at interactive website It was developed to make data analysis easy to explore and download the complete data set for each individual country.

that it Conversation The researchers explained, ‘The results show a worrying lack of progress in tackling the dual challenge of meeting the needs of all people with the means of a living planet. Of the 148 countries we analyzed, no country has met the basic needs of its citizens at a sustainable global level for the use of resources for at least the past 30 years. Although there have been some social improvements, we have seen a worrying trend in which countries tend to move beyond equitable shares of the planet’s borders faster than they reach lower social thresholds.”

Clearly, the actions needed to reverse these current trends and return within social and planetary boundaries depend on the extent of each country’s social and/or environmental deficit. Low-income countries, such as Nigeria and India, still tend to be within fair shares of most planetary frontiers, but they face the urgent need to accelerate performance improvements to meet basic needs. Middle-income countries such as China and Peru face the challenge of having to continue to improve social benefits, while reducing the use of resources to re-enter biophysical frontiers.”

The example to follow is that of small Costa Rica, which has the advantage of constantly converting resources into social outcomes in a more efficient manner than any other country, but which has a tendency to overcome certain environmental limits over time.

The real problem today is that rich countries such as the US, UK, Germany and Italy “tend to have levels of resource use that exceed their fair share of the planet’s limits, and their environmental overreach has generally increased. They need to radically reduce resource use without negatively impacting their relatively high levels of social benefits.”

The researchers point out that “Overall, our results suggest that an unprecedented shift in . is needed All the saesi, but there is also a need to transform the relationships between them. The central problem is that the global economic system is organized around the interests of capital accumulation and elite consumption, and not around human welfare. Instead, we must move to a system that prioritizes human needs and environmental stability.”

What is emerging again is a major environmental and social failure of neo-capitalism: “Rich countries must go beyond their pursuit of economic growth, which has failed to improve social outcomes and which also determines the global climate and environmental impacts that hit the poorest countries first and hardest. Countries like The United States, the United Kingdom and Germany consider post-growth policies aimed directly at the intangible improvement of human well-being and at drastic reductions in the use of resources.”

A criticism that becomes clearer when it comes to the analysis of low-income countries that, according to the study, “should have the freedom to build sovereign economic capacity, using social policies and public services to provide health care, education, housing for all, good livelihoods and food security. The neoliberal policies imposed on These countries over the past four decades in achieving significant results. The current economic system mobilizes resources and manpower in the South to support elite consumption and serve the interests of foreign investors, rather than meeting basic needs. This must change urgently,”

The researchers concluded by saying: “We hope that the results of our new study and accompanying Inspiring more research and action on the donut—from neighborhoods to nations—and helping shape policy for a more sustainable society. We invite you to dive in! “