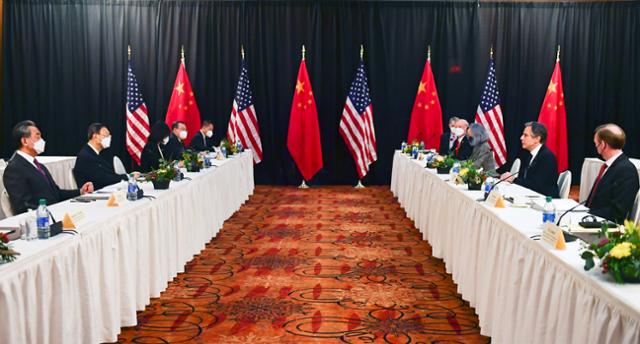 There were no concessions, no concessions, and no results to achieve. The high-level talks between the United States and China that were held in Alaska from 18-19 (local time) ended with only their faces being reddened. Although it was a reciprocal meeting after the inauguration of the Biden government, the old conflict and hatred were expressed naked. But the Chinese atmosphere is not bad. Instead, they give a generous review, saying, “This is a first successful match.” China’s Noem Soo is said to have been effective in three aspects, including the form and content of the talks and future relations with the United States.

He faced the United States equally 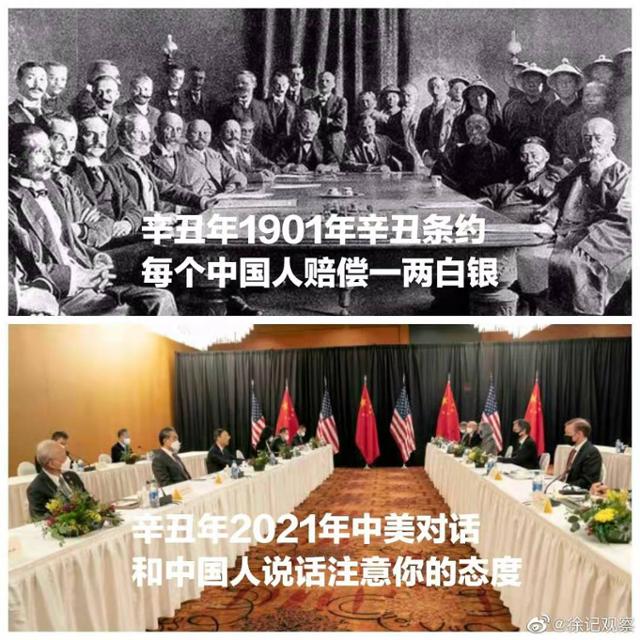 Two photos shared on Chinese social media right after the high-level talks between the United States and China. The 11 forces suppressing the boxing movement signed a “New Building Treaty” against the Qing Dynasty in 1901 (pictured above), and wrote that “all the Chinese were compensated for a hundred silver coins.” The Chinese delegation, surrounded by delegations of powers, pushed to the right corner. The image below shows the status of the new year 2021, 120 years later, with a one-on-one encounter with the United States, and it says, “Be careful of your stance when speaking to the Chinese.” Weibo capture

Immediately after the conversations, two pictures of contrasting scenes spread to the China Social Network (SNS) service. This is the appearance of the Alaska conference hall in 2021 when the Qing Dynasty flocked to the defense force in 1901 and signed a “new treaty” with 11 other countries, including the United States. 120 years ago, China paid 450 million pieces of silver for suppressing the boxer movement against an imperialist invasion. Thus, in the image of the Chinese delegation surrounded by powers, there is a history of shame “paying all Chinese for white silver (白銀)”. On the other hand, in this year’s picture, which started bilateral talks with the same stance as the United States, “Be careful of your position when talking to the Chinese people.”

An animation that appeared on Chinese social media right after the high-level talks between the United States and China. It’s a scene from the series “That Year, That Bunny, Those Things,” and I made the previous footage. He likened the Chinese delegation to a rabbit and the American delegation to an eagle. Pick up Weibo

There were also cartoons that aroused the pride of China. It’s a story about a snow fight while spitting in a conference room by comparing China to a rabbit and the United States to an eagle. On the 21st, Li Haidong, a professor with the Chinese Academy of Foreign Affairs, said, “In the past, China used to be modest to give a positive impression to the United States, but now it is different.” 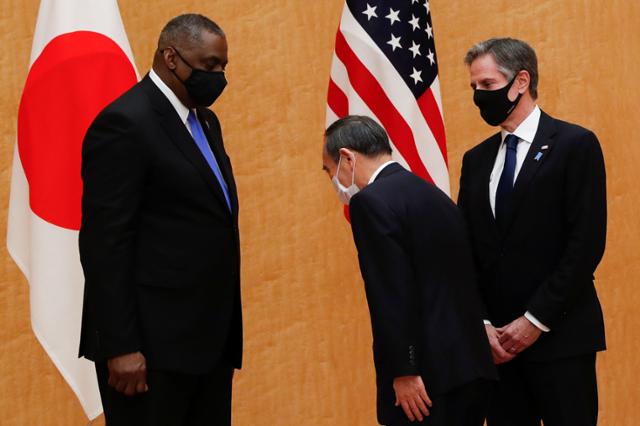 Japanese Prime Minister Suga Yoshihide welcomes US Secretary of State Tony Blingen (right) and Defense Minister Lloyd Austin (left) who banned him from his official residence in Tokyo on the 16th. The camera caught the scene of Prime Minister Suga bowed down to Minister Austin. About this, China made a convincing claim, saying it was “Japanese humiliation”. Tokyo = Reuters Yonhap News

China also made a convincing claim by attracting Japan’s ammonites. When Japanese Prime Minister Yoshihide Suga received US Defense Secretary Lloyd Austin at his official residence on the 16th, a picture of the moment he bent his back was cut out as if it were a humiliation. On the other hand, the Chinese delegation stressed, “I shouted loudly with everything I say to the United States.” Professor Shen Yi (沈 逸) from Fudan University said, “This meeting is a complete defeat for the United States.”

They avoided the risk of “strategic miscalculation” 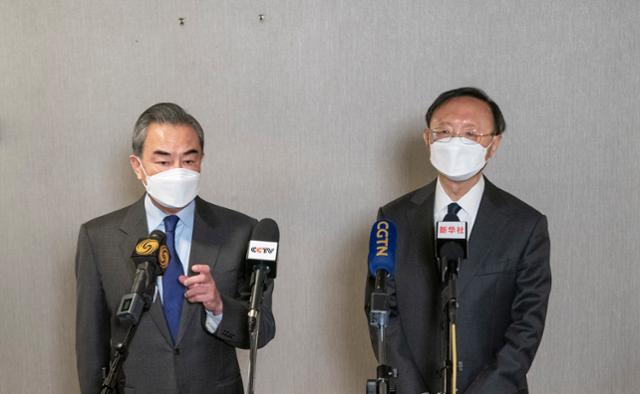 Yang Jitsu (right), a diplomatic official with the Communist Party of China, and Wang Yi, a state councilor and foreign minister, are interviewing Chinese media outlets such as CCTV after a high-level conversation with the United States in Anchorage, Alaska on the 19th. Anchorage = The Newsis Legend

The biggest income China has made is the talks. During the Trump administration, China only defended against US attacks and was dragged because they were unable to speak properly. It is the so-called “strategic miscalculation” that the United States can crush China at any time. “The misunderstanding that the United States has brought to China for so long is that it believes it can contain and suppress China through its power and the experience of the Cold War.”

③ The plate did not break 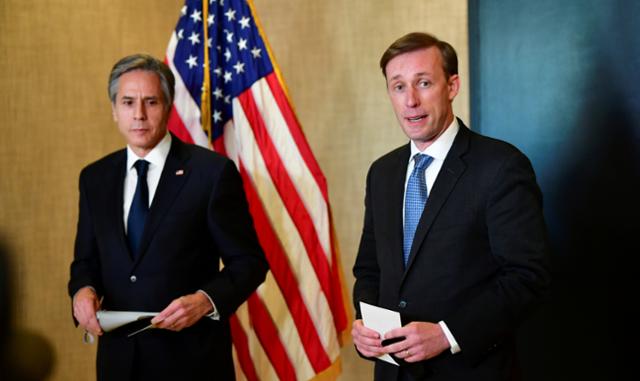 US Secretary of State Tony Blingen (left) and White House National Security Adviser Jake Sullivan hold a press conference after high-level talks with China in Anchorage, Alaska on the 19th. The two countries held three high-level discussions for two days from the previous day, but the talks ended without a joint announcement. Anchorage = Reuters Yonhap News

Despite this fierce confrontation, the United States, China and China each left room for further dialogue. After the conflict, it looks different from when the Trump administration turned its back. “The ultimate skill for negotiation is to fight, not to break the board,” said Wei Jianguo, who served as vice president of the Chinese Ministry of Commerce and secretary of the Center for International Economic Exchange. I can do that. “

News edited by Hankook Ilbo can also be viewed on Naver.