“Russia Today” website has published rare photos, one of which shows four Syrian presidents, which were circulated after Prince Philip’s death, documenting his visit to Damascus via the coast of Lattakia.

And the visit was made by Prince Philip to Damascus in the year 1950, when he was an officer in the British Navy, according to what was mentioned by the Syrian researcher and historian Sami al-Mobayed. The visit was an occasion to show the gathering of four Syrian presidents at the same time, alongside the British Prince, as it appears in a photo from the archive of the former Secretary General of the Syrian Presidency, Abdullah Al-Khani.

According to what the researcher al-Moubayed published on his personal page, the Emir’s ship “docked in Lattakia, and went to Damascus at the invitation of President Hashem Al-Atassi, where a dinner was prepared in his honor in the garden of the Republican Palace in Al-Muhajireen.”

Moubayed says that this picture has a story, first of all, because it brings together four presidents.

They are: Hashem Al-Atassi (in the center next to the Duke of Edinburgh) and Major General Fawzi Selo (he succeeded him in the palace after a year and five months, and at that time he was Minister of Defense and he was the fourth from the right), the third from the left is Colonel Adeeb al-Shishakli, who became President of the Republic in 1953 In addition to Atassi, the head of government, Nazem al-Qudsi, was elected President of the Republic in 1961.

As for what is behind the photo, according to Al-Moubayed, it is what Al-Khani said about the moment it was taken, as “everyone stood seriously at the arrival of the photographer, but the prince laughed at them all and said:“ When the photographer leaves, let me tell you how Princess Elizabeth applied! ”Everyone laughed and ruined the photo, so they took it once Again, seriously higher. “ 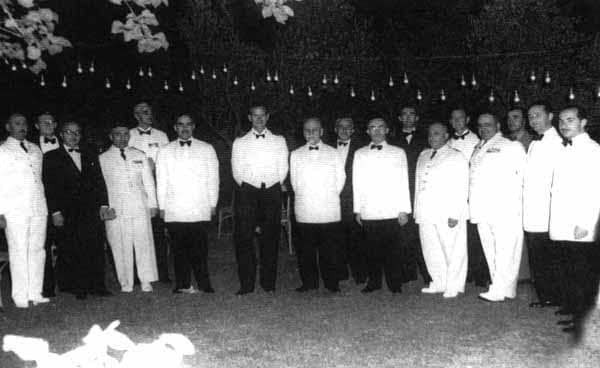