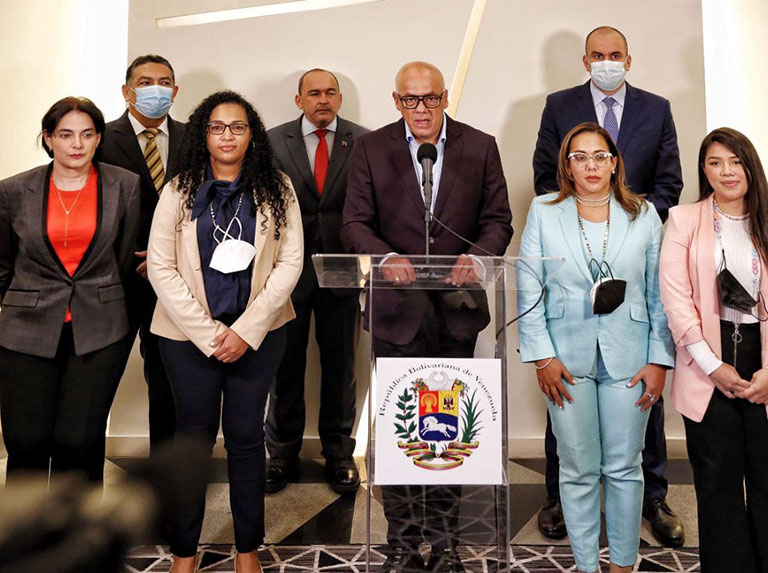 The Plenipotentiary Representative, Jorge Rodriguez, stated on Saturday that negotiations will continue between the government delegation and the opposition to advance the conclusion of agreements.

This came in the hours of Saturday night, after the speech of the Norwegian government, which renewed its position to maintain its neutrality in dialogues.

Rodriguez stated that after the impasse caused by the statements of the Prime Minister of Norway, Erna Solberg, the dialogue between the government and the opposition continues.

The head of the delegation spoke after the representative of Norway at the dialogue table, Dag Nylander, confirmed that he maintains his neutral position in the negotiation process.

“The Norwegian facilitation team will maintain and demonstrate strict integrity in dealing with the parties, in accordance with established guidelines. In this regard, we regret that the recent announcement at the United Nations may affect confidence in our role. It is essential that this negotiation process be between Venezuelans themselves without any interference On the Norwegian side, we would like to note the results achieved in the past rounds.Norway’s representative at the dialogue table, Dag Nylander, said, “We expect that the parties will be able to make important achievements during these days here in Mexico for the benefit of the welfare of the Venezuelan people.”

“With the reading just made by the representative of the facilitating team in the Kingdom of Norway, we consider that the impasse has been overcome” and “we continue to work in this arduous process to ensure that these sectors, which have preferred paths other than the constitutional one, return to the path of politics in Venezuela” .

Rodriguez, who explained that there was a situation that affected compliance with the guidelines that had already been signed between the two parties (the government and the unified platform), said Venezuela requested an explanation to clear the impasse.

In this sense, he said that he was surprised by the statement of the unilateral platform issued yesterday, which indicated that the representative of the government would not attend the dialogues in Mexico, because it was minutes before he spoke with Blade, and they were just waiting to “correct this situation to resume the process that we did not interrupt.”

“The government delegation – Rodriguez – insisted on contacting the head of the delegation of the so-called unified platform, the facilitation team from Norway, representatives of the headquarters team and the accompanying countries: the Russian Federation and the Kingdom of Low Countries.”

“We have turned the page and will continue to operate in full force,” said the authorized representative.