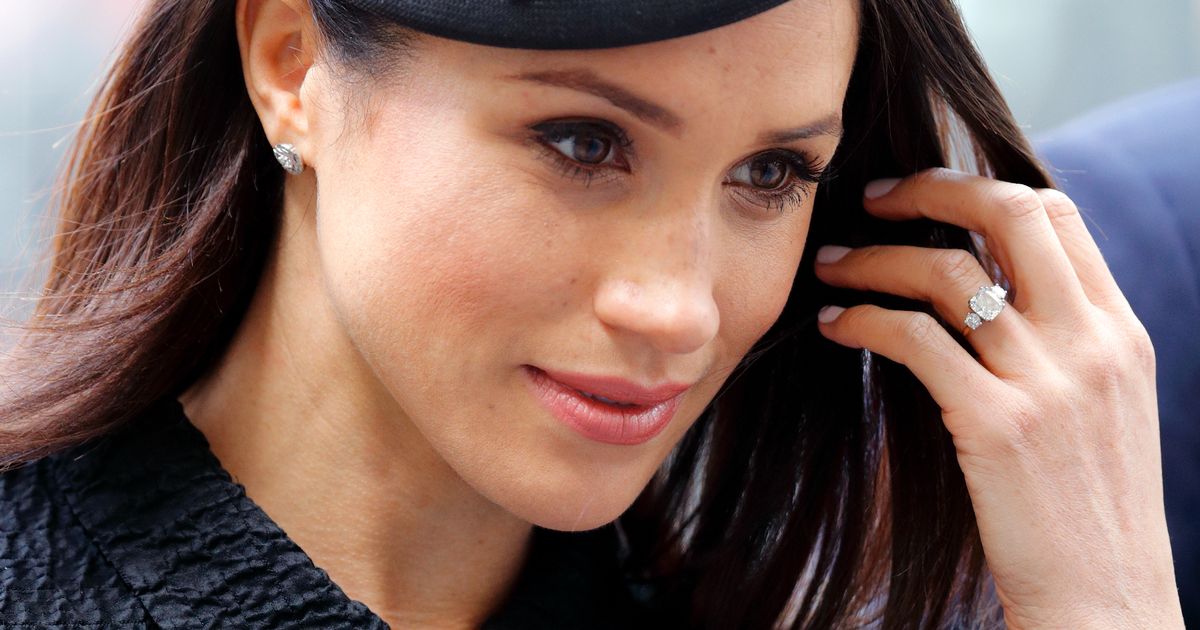 Meghan Markle gave a tearful final speech to staff as she prepared to head back to Canada after her last royal engagement.

The Duchess of Sussex, 39, cuddled her aides and was visibly emotional as she spent her final hours in the UK following her and Prince Harry’s bombshell decision to step down as senior members of the Royal Family.

The former Suits actress then jumped on the last commercial flight of the day to make it home before son Archie woke up the next morning.

Omid Scobie, was one of a number of journalists invited to Meghan’s final engagement – a private meeting with Association of Commonwealth Universities scholars – during which she spoke to students about their work on subjects including climate change.

Mr Scobie later wrote in the book he co-authored with Carolyn Durand, Finding Freedom, about how Meghan used that meeting to bid a final farewell to her team at Buckingham Palace.

And he revealed Meghan hugged him before saying the tear-jerking seven words: “It didn’t have to been this way.”

Mr Scobie wrote: “Staff who had been with the couple from day one were mourning the end of what was supposed to be a happy story: two people fall in love, get married, have a baby, serve the Queen, the end. Instead, they were leaving the country.

“As Meghan gave me a final hug goodbye, she said, ‘It didn’t have to be this way’.”

The Duchess was said to be sad that things hadn’t gone differently as she and Harry prepared to start a new life together in Canada, and later in the USA.

Mr Scobie writing for Harper’s Bazaar, added that “tears that the duchess had been bravely holding back [were] free to flow among familiar faces”.

He added: “The Duchess of Sussex emotionally [bid] much-loved aides farewell, with her flight ‘home’ to Canada leaving in a matter of hours.

“Meghan would fly back to Canada on the last commercial flight of the day, eager to be back in Vancouver Island by the morning before Archie wakes up.”

Meghan is also said to have “tearfully” told a pal “I gave up my entire life for this family” after she was blamed for her and Harry’s decision to step back.

She reportedly she “was willing to do whatever it takes.”

In their statement earlier this year, Harry and Meghan said they wanted to “carve out a progressive new role within this institution” after “many months of reflection and internal discussions”.

The couple made their last public engagement together as royals on Monday, March 9.

They attended the Commonwealth Day ceremony at Westminster Abbey with the Queen and a host of other top royals.

Meanwhile, this week Meghan gushed about Harry being a proud feminist and a ‘beautiful’ role model for their son Archie in a new interview about the importance of voting.

She spoke excitedly about her husband’s influence to US rights activist Gloria Steinem as they discussed female representation in politics.

“I look at our son and what a beautiful example that he gets to grow up with a father who is so comfortable owning that as part of his own self-identification,” said Meghan.

Harry and brother Prince William also revealed on Friday how they are commissioning a statue of their mother Princess Diana on what would have been her 60th birthday.

It will sit in the Sunken Garden of Kensington Palace, where Diana lived before she died.

A new joint statement released on Friday said the brothers “hope that the statue will help those who visit Kensington Palace to reflect on their mother’s life and legacy.”

The statue was first announced in 2017 to mark the 20th anniversary of her death, but while the creation progressed the installation was delayed by the coronavirus pandemic.

Speaking when the statue was first announced, a source close to the Palace said: “Prince William and Prince Harry have dreamed of doing this for a long time.

“They were both just boys when their mother passed away, but are both now fully grown men and want to honour her in the best way possible.

“It has taken 20 years for this to finally come to ­fruition so they are determined it will be a lasting and fitting legacy in what is their official London residence and a place special to them both.”