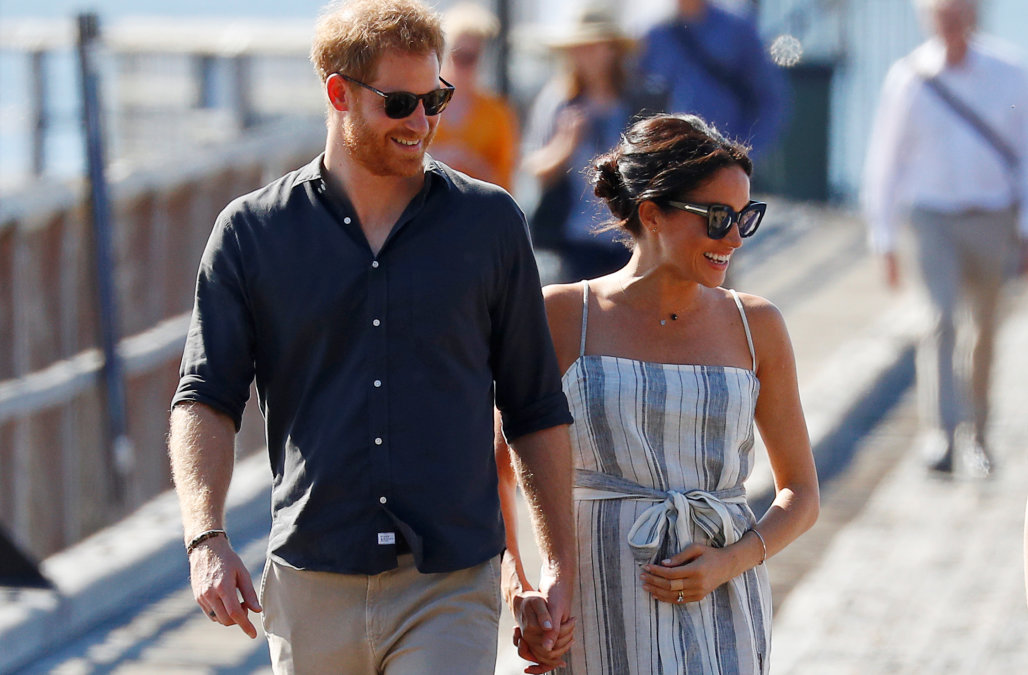 Could Meghan Markle and Prince Harry’s life significantly be affected by a new biography? Royal expert Katie Nicholl exclusively talks to ET about Finding Freedom: Harry and Meghan and the Making of a Modern Royal Family, a book coming this summer from royal reporters Omid Scobie and Carolyn Durand. It’s reportedly filled with bombshells about the Duke and Duchess of Sussex’s life in the spotlight, including “fascinating insight” about their first dates, drama within the royal family, their decision to step down as senior members and their eventual move to America.

Although Nicholl has yet to get her hands on the full copy, she says the excerpts that she’s read so far are already telling of what’s to come.

“Even Oprah Winfrey wasn’t able to get an advance copy of this book. It has literally been kept under lock and key by the Times and The Sunday Times,” she explains. “I think it’s fair to say this is no Andrew Morton’s Diana. However, the level of detail in this book is quite remarkable. What the authors have managed to do is get a level of detail which is unprecedented.”

“It’s clear that they have spoken to numerous sources,” she continues. “There is a lot of speculation that they have spoken to Harry and Meghan themselves, something that the authors have denied, and something the Sussexes’ team have been keen to also play down. They say that Meghan and Harry have had no official involvement with this biography, but it’s very clear that the authors have had access to sources incredibly close to Meghan and Harry.”

WINDSOR, UNITED KINGDOM – MAY 19: Prince Harry, Duke of Sussex and the Duchess of Sussex depart after their wedding ceremonyat St George’s Chapel at Windsor Castle on May 19, 2018 in Windsor, England. (Photo by Jane Barlow – WPA Pool/Getty Images)

LONDON, ENGLAND – DECEMBER 10: Meghan, Duchess of Sussex presents the award for British Designer of the Year Womenswear Award to Clare Waight Keller for Givenchy during The Fashion Awards 2018 In Partnership With Swarovski at Royal Albert Hall on December 10, 2018 in London, England. (Photo by Jeff Spicer/BFC/Getty Images)

LONDON, UNITED KINGDOM – JUNE 08: (EMBARGOED FOR PUBLICATION IN UK NEWSPAPERS UNTIL 24 HOURS AFTER CREATE DATE AND TIME) Meghan, Duchess of Sussex and Prince Harry, Duke of Sussex travel down The Mall in a horse drawn carriage during Trooping The Colour, the Queen’s annual birthday parade, on June 8, 2019 in London, England. The annual ceremony involving over 1400 guardsmen and cavalry, is believed to have first been performed during the reign of King Charles II. The parade marks the official birthday of the Sovereign, although the Queen’s actual birthday is on April 21st. (Photo by Max Mumby/Indigo/Getty Images)

See also  What is Alice in Borderland on Netflix

LONDON, UNITED KINGDOM – FEBRUARY 07: (EMBARGOED FOR PUBLICATION IN UK NEWSPAPERS UNTIL 24 HOURS AFTER CREATE DATE AND TIME) Meghan, Duchess of Sussex attends the Endeavour Fund awards at Drapers’ Hall on February 7, 2019 in London, England. The Endeavour Fund awards celebrate the achievements of wounded, injured and sick servicemen and women who have taken part in remarkable sporting and adventure challenges over the last year. (Photo by Max Mumby/Indigo/Getty Images)

LONDON, UNITED KINGDOM – JANUARY 31: (EMBARGOED FOR PUBLICATION IN UK NEWSPAPERS UNTIL 24 HOURS AFTER CREATE DATE AND TIME) Meghan, Duchess of Sussex attends an engagement with the Association of Commonwealth Universities (ACU) at City, University of London on January 31, 2019 in London, England. The Duchess met students from the Commonwealth now studying in the UK, for whom access to university has transformed their lives. (Photo by Max Mumby/Indigo/Getty Images)

LONDON, UNITED KINGDOM – NOVEMBER 11: (EMBARGOED FOR PUBLICATION IN UK NEWSPAPERS UNTIL 24 HOURS AFTER CREATE DATE AND TIME) Meghan, Duchess of Sussex attends the annual Remembrance Sunday Service at The Cenotaph on November 11, 2018 in London, England. The armistice ending the First World War between the Allies and Germany was signed at Compiègne, France on eleventh hour of the eleventh day of the eleventh month – 11am on the 11th November 1918. This day is commemorated as Remembrance Day with special attention being paid for this year’s centenary. (Photo by Max Mumby/Indigo/Getty Images)

LONDON, UNITED KINGDOM – SEPTEMBER 25: (EMBARGOED FOR PUBLICATION IN UK NEWSPAPERS UNTIL 24 HOURS AFTER CREATE DATE AND TIME) Meghan, Duchess of Sussex arrives to open ‘Oceania’ at the Royal Academy of Arts on September 25, 2018 in London, England. ‘Oceania’ is the first-ever major survey of Oceanic art to be held in the United Kingdom. (Photo by Max Mumby/Indigo/Getty Images)

WIDNES, UNITED KINGDOM – JUNE 14: (EMBARGOED FOR PUBLICATION IN UK NEWSPAPERS UNTIL 24 HOURS AFTER CREATE DATE AND TIME) Meghan, Duchess of Sussex and Queen Elizabeth II attend a ceremony to open the new Mersey Gateway Bridge on June 14, 2018 in Widnes, England. Meghan Markle married Prince Harry last month to become The Duchess of Sussex and this is her first engagement with the Queen. During the visit the pair will open a road bridge in Widnes and visit The Storyhouse and Town Hall in Chester. (Photo by Max Mumby/Indigo/Getty Images)

Nicholl adds that this book literally “lifts the lid on” when Meghan and Harry’s engagement actually took place, which she says happened weeks before it was officially announced by Kensington Palace.

“We get some really remarkable details about those first dates. Just the level of detail, that, for me, has been most impressive,” she says. “I think the story is familiar to all of us now, but this is the first time we are really hearing it from Harry and Meghan’s perspective, and reading it in its entirety.”

“This has made the book compelling and fascinating, but for the royal family, this book has been damaging because it has opened up old wounds,” she continues. “I think what’s very clear is that Meghan and Harry have wanted to get their side of the story across. This is clearly a couple who feel quite aggrieved by the fact that they’ve never been able to answer their critics. They have never been able to address incorrect reporting.”

Because of that, Nicholl believes this book may be “being used” to correct some of the rumors that were spread by British tabloids over the years.

“To give Meghan and Harry the chance, if not through their own voices, then through the voices of friends, confidants and people that they trust, to get their side of the story out there,” she says. “They feel — Meghan, particularly — that she has been muted for most of her royal life, as short as it was. She didn’t have the opportunity to speak out to address her critics to get her side of events out.”

See also  When will Riverdale season 5 be released on Netflix?

According to excerpts, Finding Freedom also seems to indicate that Prince Harry was unhappy for quite some time. The book claims it was Meghan who gave him the courage to finally break away from the royal family.

“I think that while Kate and William went out of their way to make sure Harry felt like a part of this team, this trio, Harry always wanted to be his own person,” she continues. “I think Meghan has very much been the catalyst in giving him that confidence to break free from William and Kate, and to break free from that trio dynamic, which was at times cozy and convenient, but actually wasn’t really what he wanted.”

Many British tabloids placed the blame on Meghan at the time, alleging that leaving the U.K. was the former Suits star’s idea and that she was taking Harry and their now 1-year-old son, Archie, with her to Los Angeles.

“It’s my understanding, and this is also explored in Finding Freedom, that it wasn’t just Meghan’s decision. I think Harry was very much a driving force,” says Nicholl. “People don’t perhaps give her enough credit. Harry is a pretty opinionated and strong-willed man, and I’ve been told by several very well-placed sources that it wasn’t just Meghan dragging Harry away.”

“She gave him a new confidence, but I think the truth is that, for a long while, Prince Harry has wanted out,” she adds. “This was a prince who’d spoken quite vocally about the restrictions of being a royal, the weight of burden, a boy who said he wish he hadn’t at times been born a prince. I think that says a lot about Prince Harry.”

Meghan Markle is teaming up with Michelle Obama, Priyanka Chopra and more for girl up leadership summit