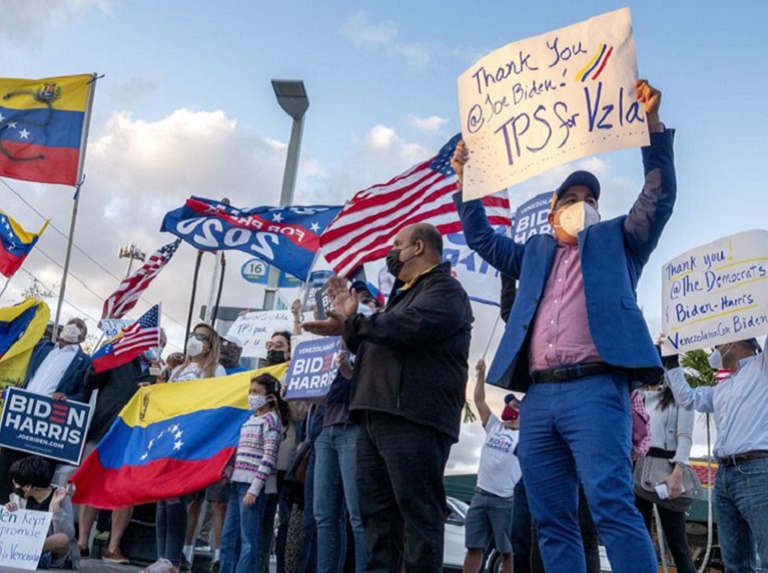 A major campaign where the words “positive”, “humanitarian” and “historic” were accompanied by the declaration of approval in the United States of Temporary Protected Status (TPS in English) for Venezuelans.

The measure was first praised by representatives of the Venezuelan extremist opposition, who thanked in social networks the Joe Biden administration’s gesture of Venezuelan immigrants on North American soil that they say has exceeded 350 thousand.

Among the honorable of this measure, there was no shortage of those who abolished the role of promoters and “fighters” for such a measure, as stated by “Ambassador” Juan Guaidó to the United States government, Carlos Vecchio, who emphasized that this was a “proposal that we promoted tirelessly.” Since 2019. ‘

Benefits are according to its promoters

The promoters describe it as the immigration status provided by the United States to the citizens of some countries who, for exceptional reasons, cannot temporarily return to their countries safely.

They assure that the beneficiaries of this procedure will not be deported from the United States, and they can request a work permit document (EAD) and can obtain a (pre-conditional) travel permit even though they state that it is “not a passport, nor does it allow travel to Venezuela”.

Between criticism and deception

Among the critics of this measure from Venezuela is Foreign Minister Jorge Ariza, who has indicated that a truly effective measure to “protect” Venezuelans would be the abolition of sanctions and all coercive measures recently implemented by the United States. 7 years in order to choke the country economically.

In addition to the allegations of the small size of the measure, there are also reports of fraud for Venezuelans who wish to take advantage of this temporary measure because lawyers charge between $ 2,500 and $ 2,800 for the proceeding.

Helena Villalonga, chair of the Multicultural Association of Activists, Voice and Expression (AMAVEX) said in “Unfortunately, after the approval of TPS for Venezuelans, many people were obtained with heavy directors prices ranging from $ 2,500 to $ 2,800.” EFE interview.

In the midst of this discourse between defenders and critics, the report of the International Observatory for Migration and Human Rights “Argios” appears, where the detail was done without prejudice to the reality of this procedure that they present, which has clear political vices on part of a system that was reluctant to legally receive immigrants, especially Venezuelans.

“More than 74,000 Venezuelans have sought asylum in the United States during the past four years, of whom only 13,300 Venezuelans have obtained asylum,” the aforementioned report explains and also reveals that during the government of Donald Trump, nearly 4,200 Venezuelans were deported, being the year 2019. It is the year that scored the highest number (with 1,619), ”the report reveals.

See also  I was refused a visa to enter the United States and I said vehemently: “The classmates are about to be killed” (photo) | United States | International Students | Student visa | Visa Refusal | Study and Migration

It also warns that this measure, which has already been applied in El Salvador, Haiti, Honduras, Nepal, Nicaragua, Somalia, South Sudan, Sudan, Syria, Yemen and Venezuela “is not supported by human rights and internationally established guarantees for the population.” On the contrary, “the formation and formation of migratory movements, and the reproduction of new and old forms. From apartheid with the emergence of “democracy”, and the development of “guest workers” currents of a legal nature, but without equal rights.

The validity of this complaint was confirmed by the suspension of TPS carried out by Donald Trump against Honduras and Haiti for political reasons, which indicates the absence of “legal protections” that are very much in the media and the voices of opposition representatives. Extremism.

“The implementation of the temporary protection regime at this time in favor of Venezuelan immigrants, presupposes a strategy to cover up the devastating effects of unilateral sanctions on Venezuela, in order to distract the public opinion from public complaints submitted in early February. By the United Nations special. The rapporteur of unilateral coercive measures, Alina Dohan, “says the International Observatory for Migration and Human Rights, which is also highlighting Biden’s election strategy for the Latin vote in the midterm elections scheduled for 2022.

Depending on the regional geopolitical context of the United States, one of the functions of the TPS is to contribute to the repositioning of the United States as the dominant actor – and President Biden as the “leader of the hemisphere” – in the strategy to overthrow the Venezuelan government, gathered under this leadership of his allies in Latin America. And Western Europe, and glorifying his rhetorical role as a protector of “a people persecuted by a dictatorship”, denounces the document that was determined to be this “beneficent” act by Biden for political interests and electoral elections and the necessity to conceal the tragedy of the application of genocidal policies implemented by the United States against governments they consider to display their hegemony The risk for countries like Venezuela.

See also  The last moment: They broke their fingers! He lost 52 kg - news -

This is the full report from Argios: