Profit Dream: From Burghausen to Finland 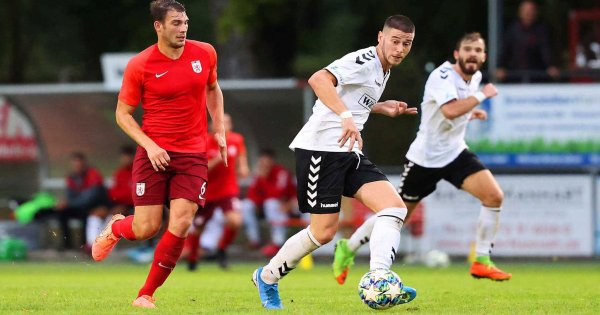 Striker Andrea Busnjak changed from SV Wacker Burghausen from Regional League Bayern Munich For nine-time Finland champion FC Haka Valkeakoski. The coach there is former national team player Timo Taino (formerly Ajax Amsterdam, Tottenham Hotspur and Auxerre). We talk to the 25-year-old about his reasons for moving to Scandinavia, his top scorer in the domestic league and the start of the season in May.

FUSSBALL.DE: After nearly four years in the amateur football division of Bavaria, you are transferring to FC Haka Valkeakoski. How did you deal with the Scandinavian countries, Mr. Businjak?

Andrea Busenjak: About my advisor. First and foremost, it was important for me to be able to continue playing football as quickly as possible. The site did not play a major role. Since the match was suspended in Regionalliga Bayern and it was unclear when it would last, I decided to move.

Were there options other than Finland?

“After doing some research on the internet, I realized that my coach is of course very well known, especially in Finland”

Bosnjak: Yes, but Finland was my best choice of all. I have a chance to prove myself in first class there. This is a big thing for me and I’m so glad it worked.

It is possible that you are fulfilling your dream of big profit.

Bosnjak: It is true. When I moved to Germany in 2017, I already had a goal of becoming a professional. After I didn’t do it, I was thrilled to be a professional in Finland now.

However, your time in Germany was extremely successful. What is your conclusion?

Bosnjak: Even if nothing comes from a career in Germany, I have had many wonderful years in which I gained some positive experiences and was able to develop steadily. At TSV 1880 Wasserburg I was the top scorer in the domestic league with 24 goals this season and climbed into the state league. She last played in the regional league in Burghausen and scored regularly. So the last few years have not been successful in any way.

In Finland, you play in first class for the first time in your career. What are your expectations for the adventure?

Bosnjak: I’m so excited and happy that now I can focus completely on football. In Germany, it also worked side by side for bed and mattress assembly and connection service. Now I just play football. I think this will make me stronger again.

How well do you already know the country and how were your early days in Finland?

Bosnjak: Not very good yet. (Laugh) I have never been to Finland before and I have to settle down first. I’ve been here for about a week now and have completed my first training session. The first impression is positive and I notice that my fitness is improving every day.

At FC Haka, you have a top coach in former Finnish national player Teemu Tainio. Do you know him from his work days?

Bosnjak: I hadn’t seen any of his games, but I was familiar with the name. After doing some research on the internet, I realized that, of course, it is very popular, especially in Finland. (Laugh)

Was Taino also a reason to change you?

Bosnjak: Yes Nice. He has been a great player and has been a coach for several years now. I can definitely learn a lot from him and I look forward to spending time with him and my new team. The new season starts at the beginning of May and I want to recommend myself to a spot in the team right away.