Human body parts and aircraft parts recovered from the sea 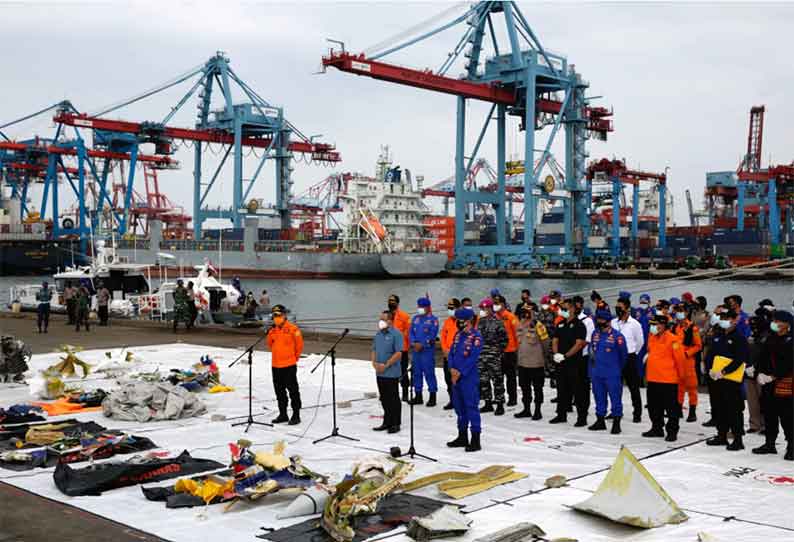 Rescue workers are removing human remains and aircraft parts from waters off Indonesia.

A Srivijaya Airlines Boeing 737-500 plane left from Jakarta Airport in Indonesia for Pondicherry on the 9th of last month.

But after only 4 minutes of take-off, the plane suddenly disappeared from the radar while flying at an altitude of 11,000 feet.

The plane was carrying a total of 62 people, including 46 adults, seven children, three children and six flight attendants. The Ministry of Civil Aviation said all of them were from Indonesia.

Within minutes, authorities said they knew where the black boxes of the plane, which had fallen into the sea, were located.

Rescue workers have pulled human body parts and aircraft parts out from under the wreckage.

More than 10 ships are involved in the search with navy personnel.

Several people from an island near where the plane disappeared said they saw things that looked like parts of an airplane.

A video clip has been posted of an Indonesian plane crashing into the sea from a height of 10,000 feet.

The plane crashed into the sea in less than a minute from an altitude of 10,000 feet and was completely intact until it touched the sea.

In this case, a video taken by deep-sea swimmers found things like a baby’s suitcase, parts from an airplane, as well as parts of the human body. Attempts have been made to identify those who died by DNA testing using those parts of the body.

Rescue workers have pulled human body parts and aircraft parts out from under the wreckage.

The Boeing 737-500 had eight accidents. These are all incidents in which the air damage cannot be repaired. 220 people were killed in these accidents. In September 2008, 88 people were killed in the crash of an Aeroflot PJSC 737-500 aircraft. A subsequent crash in July 1993 killed 68 people on Asiana Airlines. Investigators attributed the accident to performance, training or weather. But when the plane of Srivijaya crashed in 182, no one was alive. The crash of the 737-500 represented the third worst disaster in Indonesia.

The Air Safety Network estimates that there have been 104 passenger plane crashes in Indonesia since 1945, killing more than 1,300 people. It was classified as the most dangerous place for flights in Asia.

Volcanic eruptions in Indonesia are causing more accidents as particles are absorbed into jet engines. In 2019, following the eruption of the Jebel Ali volcano, Bali airport was canceled and a large number of flights diverted from there. With global warming, extreme weather events are becoming more common.