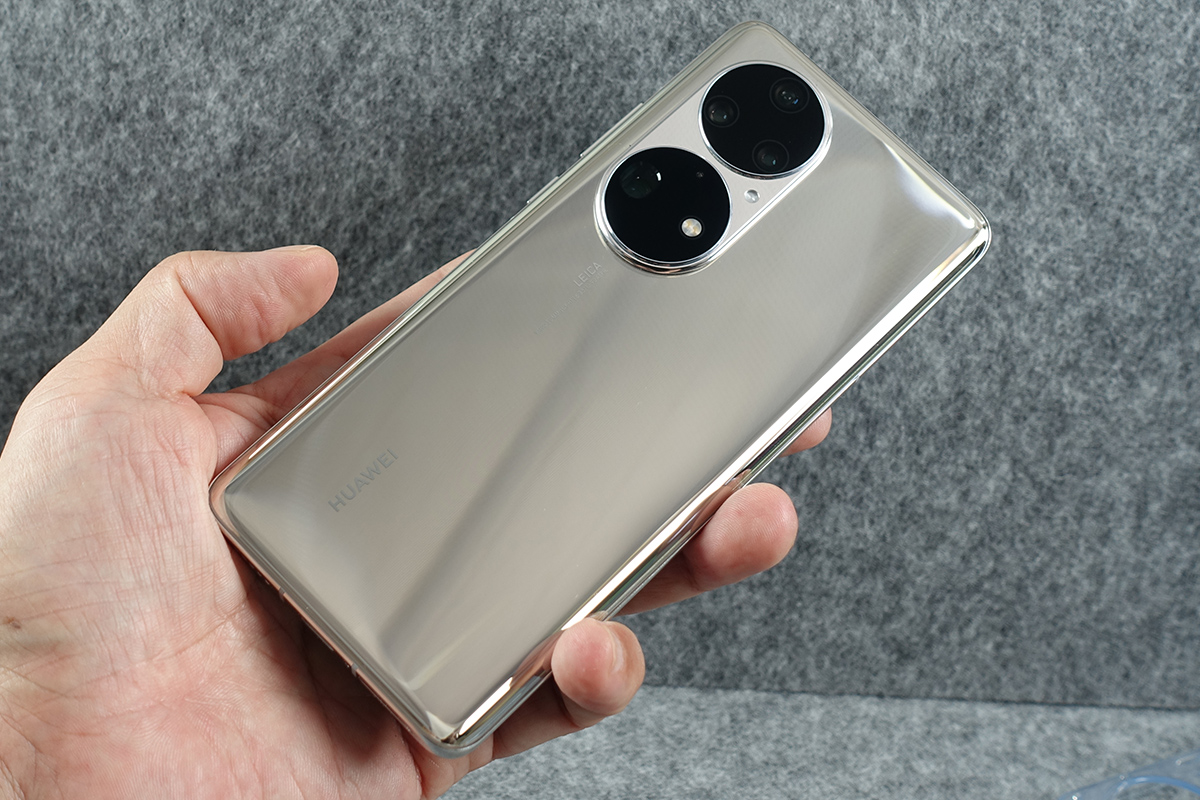 Released every spring, the 2021 “HUAWEI P50 Pro” Huawei “P series” was finally launched in China on August 12th. The author will buy the imported products in Hong Kong on August 13, the day after the release, and hastily send you a quick review.

First of all, the package. It is as thin as the iPhone 12 series. The charger and USB cable are not included, only the TPU case and SIM pin are included.

The screen is 6.6 inches, 2700 x 1228 pixels. The 13MP front camera is in the middle of the top. The protective film was attached to the initial case.

I chose “Cocoa Gold” as the body color. The color is close to champagne gold, but the luster is a little weak. The “HUAWEI” logo on the back is located a little closer to the center of the main unit, but this appears to match the center line of the camera.

Although the camera is quite large, the base part has a rounded corner shape, so it doesn’t feel that big. The two circles are a wide-angle lens with 50 million pixels on the top side, an ultra-wide lens with 13 million pixels, and a triple-lens monochrome lens with 40 million pixels. The bottom side is a 64MP telephoto 3.5x type telescope and LED light. There is also a “LEICA” logo next to the camera.

At the top of the right side are the power and volume buttons. The camera bulge is not that big and the thickness is very low. The buttons are only on the right side, nothing on the left side.

The SIM slot, USB Type-C terminal, and speaker are arranged at the bottom of the main body. There is nothing on the upside. It is IPX68 water and dust resistant, and no water enters the main unit through the terminals or openings on the bottom under specified conditions.

The screen is an edge display with left and right rounded corners. Since the sides are not covered by the screen compared to the “Mate 40 Pro”, it gives the impression that there are fewer accidental touches. Also, the P50 Pro can hold the frame more firmly, so I feel it’s easier to hold.

The installer HarmonyOS 2 is easier to use than Android, as it allows you to organize app icons into folders and paste apps as widgets. In addition, in Hamony OS 2, the Android app also works by installing the APK file.

If you look at the antenna schematic side, you can see the “4G” screen. P50 Pro does not support 5G, only 4G (and 3G and 2G). High-speed connectivity cannot be expected, but with automatic switching between 4G SIM and Wi-Fi 6 at 2.4 GHz and 5 GHz, and simultaneous download for 4G and Wi-Fi networks, the downlink speed supports up to 3.5 Gbps (value the theory) .

There are seven camera shooting modes: aperture, night view, portrait, portrait, video, professional, and others. The user interface is almost the same as previous Huawei models. By default, images are captured at the equivalent of 12 million pixels (4096 x 3072 pixels). One-touch zoom switching is at 1.0x wide angle, 3.5x and 10x in 4 steps. Press and hold the zoom view area to support shooting up to 100x.

To switch to 50 million pixels, select High Resolution from the other modes. You can also switch to monochrome photography.

The Huawei P series has a solid camera performance, and DXOmark has the highest rating for the P50 Pro at this time. You can take pictures beautifully without being familiar with it in the city, which makes photography fun. Below is an example of standard photography.

I bought a P50 Pro and used it for a day, but I didn’t feel any pressure because the main unit was running well and the performance was high. However, since it does not support 5G, the dissatisfaction remains when watching videos or sending data. I used to link videos and upload them to other 5G smartphones.

Also, even though HarmonyOS 2 has an itchy user interface, it would be a little difficult to use it as a normal machine outside of China unless you install the APK and GMS at your own risk because there is no Google service.

However, the capacity of the camera, which is the number 1 smartphone, is perfect. After you finish your shooting test from noon to evening, after dinner, you can take a shot appropriately in the city at night on the way home.

The P50 Pro has a high degree of hardware and software proficiency. Although there is a problem with the GSM, it is a terminal that I want to sell outside of China.

See also  There is certainly up to 50% off above 500 games in the Xbox Best Game Sale • Eurogamer.web