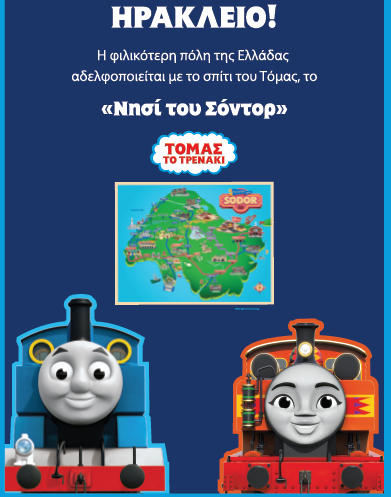 the Tommaso the train (Thomas & Friends™), the successful children’s television series that teaches the importance of friendship, announces today that the city of Heraklion, Crete, will be “twinned” with the island of Sondor, the wonderful home of Thomas, having become more friendly. In Greece, according to the new “Friendship Index – Thomas the Train”.

Today, July 30, on the occasion of World Friendship Day, the ‘Friendship Index – Thomas Train’ has been announced, the culmination of a major study/research involving 2,000 adults from across the country. This study divided cities based on the friendliness of their residents, asking them questions about the kindness, support, and care they show others. The capital of Crete won first place by a very narrow margin of Ioannina, while Athens and Thessaloniki also scored high, ranking third and fourth, respectively, based on the “Friendship Index – Thomas Train”.

Created by the esteemed Wilbert Audrey, Sunder Island has been the backdrop to Thomas’ stories, which are based on friendship and togetherness and have been loved for generations for over 75 years.

the Heraklion It managed to reach the number one spot, scoring consistently high in all categories, including caring for a friend who needed help and someone else’s positive feedback to get a job. Heraklion is also the place to hear kind words, compliments and praise, with 58% of the population often giving praise.

The study revealed that the population of Ioannina They are the ones who give advice to their friends when they need it and encourage them to try something new. They showed the utmost willingness to go as far as to help a friend who needs it, for example, traveling more than 107 kilometers to help a friend with a punctured tire – 12 kilometers above average.

According to the “Friendship Index” of its residents Athens Will intervene for a friend to avoid an unpleasant situation during the resident Larissa They were altering their schedule to serve a friend, selflessly. New research also shows that in Patras Friends talk more comfortably about their feelings.

Danai Agadko, Marketing Director of Ass. Mattel: “The gift of friendship is truly wonderful and Thomas Koch represents these values ​​that we have proudly celebrated for 75 years. Therefore, we would like to extend our warm congratulations to the city of Heraklion, which has emerged as the friendliest city, according to Friendship Magazine. Index – Thomas Train.” “Heraklion solemnly with the island of Sunderland, home of Thomas, as a token of appreciation for the amazing levels of friendship encountered there.”

the Heraklion Crete was added to these six friendliest places that climbed to the top of the worldwide “Friendship Index – Thomas the Train” and thus received the honor of “twin” with the island of Sodor.

The friendliest cities in Greece according to the Friendship Index

How was the “Friendship Index – Thomas Train” calculated?

On behalf of Thomas the Train, OnePoll received a sample of 2,000 out of 5 adults from all over Greeceης H 20ης May 2021 with a sample of participants from 6 different cities. Each question was scored based on an overall ‘Friendliness’ score for each answer, as determined by OnePoll. The scores assigned by each person to the questions were aggregated to form an overall friendliness score for each respondent, which was then translated as the average for each city. These approximate results for cities were used to rank cities based on friendliness and friendliness.

Mattel is a leading global children’s entertainment company specializing in the design and manufacture of high quality toys and consumer products. We create innovative products and experiences that inspire, entertain and develop children through play. We attract our customers through our portfolio of popular franchises, such as Barbie®, Hot Wheels®, American Girl®, Thomas & Friends®, UNO® and MEGA®, as well as other popular brands that we own or license in partnership with corporate entertainment. Our catalog includes movies, TV, video games, music, and live event materials. We operate in 35 locations and have products in more than 150 countries in partnership with leading retail and technology companies around the world. Since its founding in 1945, Mattel has prided itself on being a trusted partner in exploring the wonders of childhood and children’s potential to reach their full potential.