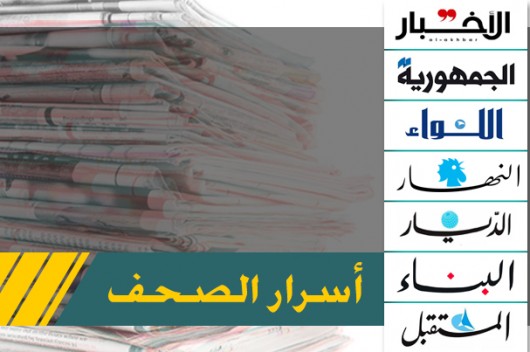 Addresses
Building:
– Mikati as president in charge of the 70-vote threshold… after meetings with blocs and the nomination of former presidents
The draft of the 24 ministers is the basis of the government… and the two Christian ministers in exchange for the two ministers of the consultative meeting
– The dollar reaches 17,000, and it may touch 15,000… and the oil agreement with Iraq is a model that can be generalized.
news:
The current warns of “malicious intentions” behind the label: No participation or trust | – Assigning Mikati today…the authorship is open?
Al-Kazemi-Biden’s “pledge of allegiance” to the Iraqis: the occupation is shifting…and not withdrawing.
Audit Bureau: Fines against a carpenter and technicians for wasting public money
Preparations to “cleanse” the public sector: the law to “root out the Brotherhood” awaits by the thousands.
home:

The assignment path is clear for Mikati, with more than 65 votes, and the party has not been resolved.
– Paris pressed an active Berry to secure the cover… and Hariri shared and named
One million tons of Iraqi oil to help Lebanon ease the electricity crisis
day:
– The “third” miqati… does it violate the disruption?
Rouhani after opening dams in Khuzestan to calm protests.
Two Turkish soldiers were killed in Syria… and a missile attack on Afrin.
The largest Lebanese flag in chalk is a message of hope from the heart of Beirut.
Major General:
The blocs surround the objection to Mikati… and the nomination exceeds 70 deputies
The Ministry of Interior is the contract between the president-designate and Basil… and the covenant between decrees or the demand for his resignation.
Al-Kazemi at the White House today: the date for withdrawal and maintaining support
Qais Saeed freezes parliament and dismisses the government
Tunisia regains the atmosphere of the Jasmine Revolution
Macron asks Israel for clarifications on Pegasus
Republic:
Aoun and Mikati, cooperation is possible
The interior prevents authorship
The President’s Team and the Time Cup
– Strida Geagea, we can only go to the palace
The play of commissioning and authorship in its first and second parts

– Sources related to the government track consultations said that President Najib Mikati, who resolved his assignment, set a maximum period of one month to form the government, and if he does not succeed, he will apologize after that, and that this means that there is a different climate internationally and regionally in favor of Mikati compared to the assignment of Prime Minister Saad Hariri.

China’s investment orientation towards Afghanistan and Syria after Iran means, according to American experts, that China will move to building a solid presence at the expense of limiting investments in the Belt and Road plan to the gray countries that cooperate economically with China and remain politically in Washington.
Republic
– A political pole described the previous calls for activating the caretaker government as “masquerading” and reflecting ignorance and stupidity. There is no way to do that, neither by the constitution nor by the law.

– The circle surrounding one of the most prominent candidates to head the government disputes two opinions about how to deal with the position of a prominent parliamentary bloc on the issue of his assignment.

– It was noted that a constitutional entitlement will not witness a boycott from any party, unlike previous times
Major General

– President Najib Mikati offered a set of guarantees, both internal and external, in exchange for his acceptance of the assignment, with the aim of removing the obstacles and obstacles that obstructed the paths of those who were assigned before him and prevented them from safely reaching the beach of authorship!

A veteran politician considered the signing of the oil agreement with Iraq to secure one million tons of fuel for Lebanon’s electricity as a new achievement for Major General Ibrahim and a direct response to the instigators of the media campaign he was recently exposed to!

– A political pole repeats in his assemblies that the Speaker of Parliament is a key partner in the decision of the Club of former Prime Ministers to nominate President Mikati in the binding parliamentary consultations!
day
– It was noticed that Minister Raymond Ghajar deliberately did not mention Iran in his response to a question about the Iranian offer to provide oil to Lebanon, avoiding going into it.

– A former minister and MP, known for his media relations, is trying to hold a colleague from his political current responsible for his failure to achieve a project he announced some time ago but was not implemented.

A good number of the current parliamentarians tend not to run in the upcoming parliamentary elections in order to avoid insults, and some of them say that the crisis is long, “So what can we do?”

– Supporters of the “Amal” movement have launched a campaign a few days ago against Representative Jamil Al-Sayed, in which the most vile descriptions are used and include all social media, and the call is made to circulate them through WhatsApp groups