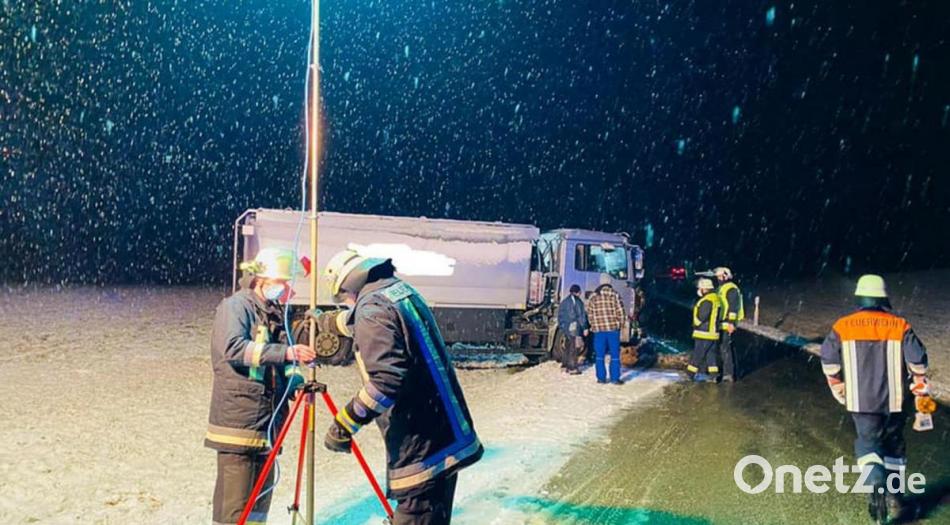 Snowfall and inappropriate speed caused a number of accidents in Amberg and the Amberg-Sulzbach region on Monday evening. A tanker truck rolled off the road between Sunzendorf and Högen.

The first accident happened shortly before 6 pm on state road 2040 between Engelsdorf and Polesdorf. Rescue workers were called to a car with a trapped person. A 54-year-old man got off the road with his car very close to the Amberger Stadtwerke waterworks on a snowy road. The car drove across a bridge and landed on its side in the nearby meadow. The police, the Red Cross and fire brigades have withdrawn from Freudenberg-Wuchdorf, Hiltersdorf and Komersbruck. No one was seriously injured.

Soon after, there was an ultimatum in the western district of Amberg-Sulzbach. As the police in Sulzbach-Rosenberg announced, a 46-year-old man skidded with a tanker on the road between Sunzendorf and Högen. Just before the crossroads leading to Cochinendorf, he lost control of his car due to the slippery, snow-covered road and “the speed that did not adapt to the road conditions”. After driving 50 meters through a meadow, the truck finally stopped in a ditch. “Fortunately, the car was still filled with about 1,000 liters of heating oil and it did not roll over,” says Sulzbach Rosenberg police. The driver was not injured. However, the front of the car was damaged, estimated at around 30,000 euros. The recovery continued until 10 pm. According to the police, the fire brigades from Ilchwang, Fornried and Wiegendorf, which were on site with 30 workers and five cars, provided excellent service. Police said the dangerous goods vehicle driver should have gone to the next parking spot immediately due to the snow-covered lanes and interrupt or end their journey. A good report awaits 46 years.

There were also two incidents in the Vilsik region on Monday evening. The first event took place at 6.45 pm at Schlichter Straße at the level of the Netto car park in the direction of Schlicht. According to police, a 45-year-old from Velsk was driving too fast, and at first he collided with his car on the sidewalk on the slippery road. Then he slid his car on the left side and over there on a green area. The garden fence was damaged. The driver and his passenger were not injured. According to the estimates of the Auerbach police station, the total damage is approximately 8,200 euros. Just an hour later it crashed again: between Sorgov and Schleicht, 32-year-old Widner was traveling very quickly. He turned around from the left lane in his car. The car hit a handrail and broke it. The man was not injured. His car had to be towed. Damages in this case are approximately € 10,500.

Another accident occurred near Ebermannsdorf. On a Monday evening on the B 85, ​​a 57-year-old man who had turned right on Federal Road toward Amberg from State Road 2151 via Freihöls slid into the trench a few meters later. And in doing so, she ran over a traffic sign. According to estimates by Amberg Police, the total damages are likely to be around 1,000 euros.

Summer tires and inappropriate speed – This is not a good combination at the start of winter like Monday. In the evening, a BMW driver (41) was on the AM 30 road, which was closed due to an accident in Raigering. When the man realized the situation, his evasive maneuver at the roadblock ended. The collision, which caused the airbags and at the same time destroyed the front axle of the car, damaged about 2,500 euros. The man came to St. Marin’s clinic with minor injuries. Shortly before, a 57-year-old woman lost control of her pickup on AM 30. The car exited off the road on the right in Fagerastrasse. The car flipped over on the roof and came to rest in this position in a ditch. The driver was not injured.

Accident between Hahnbach and Sulzbach Rosenberg