Field messages.. An anticipated parade of the crowd with “more than 20,000 fighters and drones” | Archives 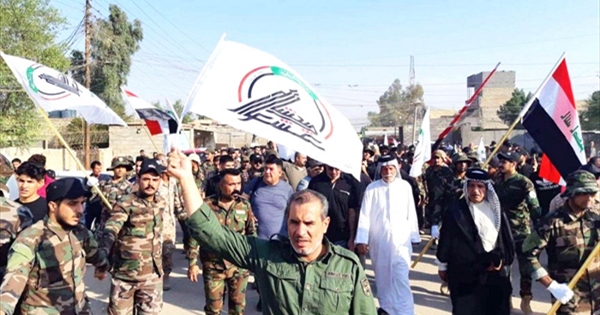 New details revealed by an Iraqi source, today, Tuesday, about the upcoming review of the Popular Mobilization Forces, on the occasion of the seventh anniversary of its founding., Where The crowd is expected to enter forcefully in the upcoming parade, according to the source, in an attempt to send messages and prove their strength on the ground..

The source reported toRT, that “the crowd will hold an official ceremony on the thirteenth of this month, in the presence of the Prime Minister, Commander-in-Chief of the Armed Forces, Mustafa Al-Kazemi, which is the day that commemorates the issuance of the fatwa for sufficient jihad by the supreme religious authority, Ali Al-Sistani, after which the crowd was formed.”“.

The source added that “the parade will not be attended by parties or institutions other than the crowd, as it will go from Baghdad to the eastern province of Diyala, to present the numbers of its forces, mechanisms, equipment, and new weapons, in Camp Ashraf.”“.

Camp Ashraf is a camp in which the Iranian opposition group, the People’s Mujahedeen, has been residing since the 1980s, with the support of Saddam Hussein’s regime, before the last individual left in 2013..

The source indicated that “more than 20 thousand fighters will participate in the parade of the crowd, in addition to new armored vehicles that have been added to its mechanisms, and drones.”“.

It is noteworthy that the Popular Mobilization was established in June 2014 after ISIS took control of the city of Mosul, the capital of Nineveh Governorate, before turning into a body that had a law voted on in the House of Representatives..