Australia: a bay of broad sound and the secret of tides 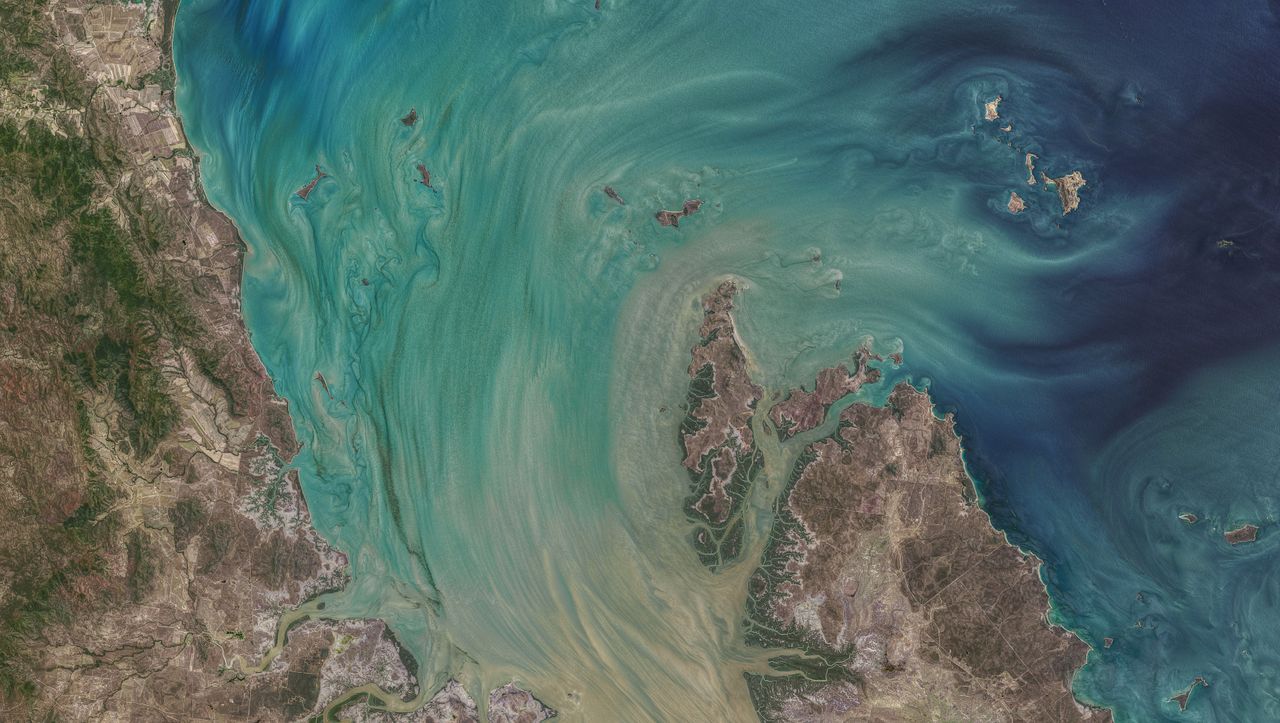 The alternation between the tides is one of the most amazing phenomena on Earth. When children go on vacation to the North Sea for the first time, they can sometimes be amazed at the disappearance of water and the return of water on their faces. Perhaps it was no different for people in primitive times, when they had no idea about the gravitational pull of the moon and the sun and the effect of the earth’s swirling, which keeps water moving around the globe.

The tidal range in the North Sea remains manageable. It is located on the coast of the German North Sea between two and three meters. This is insignificant compared to the water movement that occurs in the area on the above satellite image. The image is from the east coast of Australia. Here the difference between tide and root reaches ten meters. It is the largest tidal fluctuation in the region.

The photo shows Broad Sound, a funnel-shaped bay about 50 kilometers long and 20 kilometers wide. It is located in Queensland, the southern end of the Great Barrier Reef, just in front of the bay. It is located approximately 700 kilometers from Brisbane, the state’s most important city.

Already in the early nineteenth century one scholar noticed that the bay was something special. British explorer Matthew Flinders reported that the tide “reached at least thirty, maybe even thirty-five feet” and came hours later than expected. In fact, the water here is six times higher than anywhere on the east coast. Flinders was at a loss.

READ  The Earth's rotation is getting faster - should we be worried?

It has now been resolved. The unusual tidal range is due to specific local geographic conditions. The tidal forces are enhanced on the bass by the shape of the bay and the shallow waters of the nearby Great Barrier Reef.

Coral reefs initially block the movement of water. The stream is concentrated in two nearby channels – the Flinders Corridor in the north and the Capricorn Canal in the southeast. Water movements are particularly strong here. Masses of water converge in the bay and lead to a marked increase at high tide. Due to the coral reefs, the water essentially has to detour through the two channels to reach the bay – this explains the time lapse. Due to its shape and size, the tides in different regions may be higher than in other regions.

The image above was captured on October 29, 2020 at 10 am EST by NASA’s Landsat 8 Earth observation satellite. It is a mixture of art and science NASA writes. Because the researcher who edited it worked as a photographer adjusting lighting and using filters to bring out the fine details in the water.

The lush colors make it easy to see and distinguish sediments and phytoplankton in the water flow. The light brown tones near the shore were probably blown clay. On the other hand, the coarse-grained carbonate is transported to the outside. There are no noteworthy rivers flowing into the bay, the tide alone provides the color combination.

With the ebb and flow, it becomes more violent elsewhere: in Canada’s Bay of Fundy on the Gulf of Maine, the tidal range reaches 21 meters.