At least 6 dead after a strong earthquake in Croatia 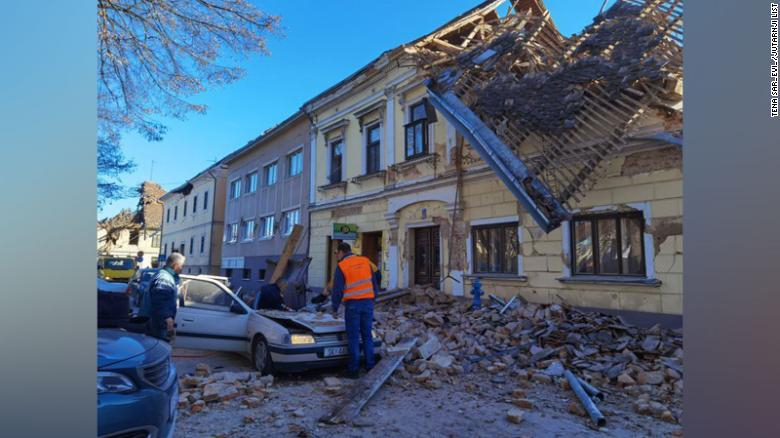 (CNN) – At least six people have died after an earthquake struck parts of central Croatia on Tuesday, the Croatian Interior Ministry announced in a statement on Twitter.

At least 6 people were in serious condition and 20 were slightly injured. “Our hearts are with the families of the dead and injured,” she wrote on Twitter, adding that search and rescue operations are still continuing.

“We are doing our best to help the citizens of Trinja and the surrounding areas in this tragic and tragic situation,” Interior Minister Davor Bozinovic said in a tweet on his own account.

The earthquake struck the Balkans at 12:20 pm local time (6:20 a.m. ET) and the epicenter was 44 kilometers southeast of the capital, Zagreb, according to the European-Mediterranean Seismological Center (EMSC).

EMSC said it was the largest earthquake to hit Croatia so far this year, adding that it could “cause significant damage at central close distances.”

Hina reported that Darenko Dombovic, mayor of the Croatian city of Petrinia, called for immediate emergency help, saying that “half of the city has been destroyed.”

Pictures of the city showed a building roof collapsed and a car smashed into falling debris.

Dembovic described the “panic” scenes after the earthquake during an interview with CNN, the Croatian affiliate, N1. “There is a state of panic and people are looking for their loved ones,” he said.

We take people out of cars, and we don’t know if people are dead or injured. I heard that one kindergarten collapsed, but fortunately there were no children, while in another the children managed to escape. “

“We have mobilized all available services to help the people and clean up all the broken pieces,” the prime minister said.

Reuters reported that the earthquake can be felt as far away as Zagreb. Pictures from the capital showed tiles, broken bricks and other debris.

Damage in Zagreb, Croatia, after the earthquake.

“My city has been completely destroyed. (…) I cannot describe it.” “It’s like Hiroshima,” said Mayor Petringa Darenko Dombovic, in a passionate call for support.

“We need firefighters, we don’t know what’s under the roof. The roof fell on a car and we need help.”

Sharon Braithwaite and Ina Bellobrick contributed to this piece