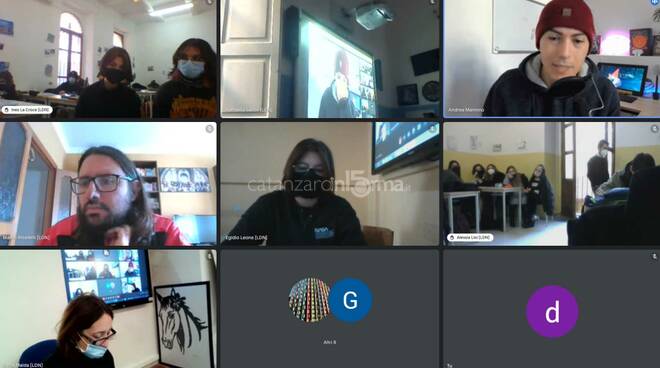 Andrea Manino He will soon hold an educational workshop within the Piazza Roma complex of the “Dei Nobili” high school, an artistic address. This is the promise made by the young designer, new to the Netflix series Zerocalcare, at the end of yesterday’s meeting with students through an online platform.

meeting, required of School Principal Angelo Galliardi, witnessed the participation of some high school classes, each connected to its own classes. Many technical questions and also some curiosity about his life and career choices.

Andrea Manino, 33, born in Soriano Calabro and raised in Vibo, has now been transferred to Turin: “I have been painting since I can remember – Manino explained to CatanzaroInforma At the end of the meeting with the boys – I think it was a way to escape from reality. At the same time I was a kid asking himself many questions about reality. I did classical studies, at university I studied philosophy, and after a period of intermittent studies, I ended up at the Experimental Center of Cinematography in Turin. Here I found a home.”

Among the most important work experiences is cooperation with lo Zikeno Doro, which has so far signed the trend of three music videos, processing as 2D Animation for the Netflix Series by Zerocalcare-Movimenti Production. Manino said: “I do not hide however – for me – that commissions for promotional content for animation are also particularly important, as clients leave me good creative freedom! They are of course small facts, but beauty is often found in little things.”

Enthusiastic High school teacher Elena Maeda: “It was a particularly stimulating meeting for the boys – he said – not only in terms of the technical aspects he presented, but also because they were able to deal with an artist who made them, who believed in his abilities and pursued his goal with determination. It is an example of not giving up, going to school and specializing.” .

Mannino: “Cooperate with others, ask yourself and above all study hard”

“I always gladly publish what I know about animation – explained the young artist -. It is no coincidence that I teach it this year (online) also at a school in Marche. New generations are oxygen to me! I am sure that the more number of The stimuli we give them, the greater their ability to bring out a better world than the one we leave them, even if it is only a fictional world (video game, movie, serial.) The talk at Liceo Artistico in Catanzaro was very exciting, especially at the moment when the questions were asked: about the technologies used In 2D animation; on how to deal with difficult times while working; on which path would it be best to take to enter the world of animation. The students showed a lot of curiosity and pragmatism which I like.”

“I hope I have informed them – concluded Manino – that to achieve success in what they want, one must not shut himself down like a hedgehog in his own world. We need to cooperate with others, to question ourselves and above all to study hard. But above all, put what You learn it into practice. On the other hand, in the world of animation, practice always comes before theory.”