Angry at his family, he dug an underground house for 6 years 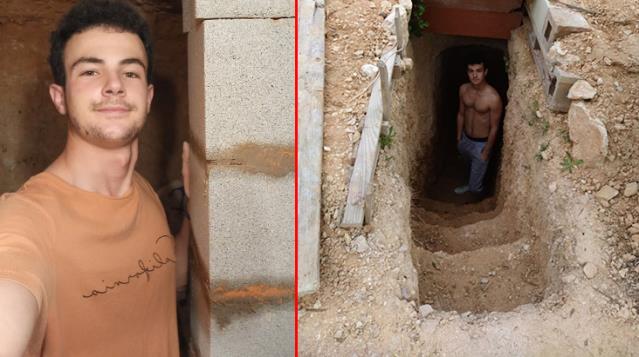 Andres Canto, 14, who lives in the town of La Romana in Alicante, Spain, began digging a hole in their backyard after an argument with his parents. After 6 years, the pit dug by Andres has been converted into an underground house with a living room and a bedroom.

The young man, who had continued the excavations he had begun angrily on his family for years, made the three-meter-deep cave a refuge for himself. Andres, now 20, set up a Wi-Fi system in his cave room, which was descending by steps, and placed items such as a bed, radio, chair, and food.

Describing the controversy between him and his family for 6 years, Andres Canto said, “Before I went out with my friends, my mother asked me to change my clothes. But I refused and had to stay home.” Andres said he started digging holes to get rid of his anger and that after years of digging he built an underground house. The young man, who said he was aiming to dig a very deep hole at first, stated that he realized he could turn this cave into a living place.

His friend helped out

Andres, now the actor, has stated that he was digging in the evening after he came from school and his friend Andrew was helping him too. Andres, who developed his own techniques while digging, said he created a pulley system to bring underground debris to the surface.

“It’s great to have everything I need here. Working here can be cumbersome because it’s damp and there’s not much air around, but I’m motivated to keep digging every day. I’ve always loved making little huts.” I was going to build a beautiful home when I found it. I was a kid with a lot of imagination. “