A sweeping victory message for the right in Madrid 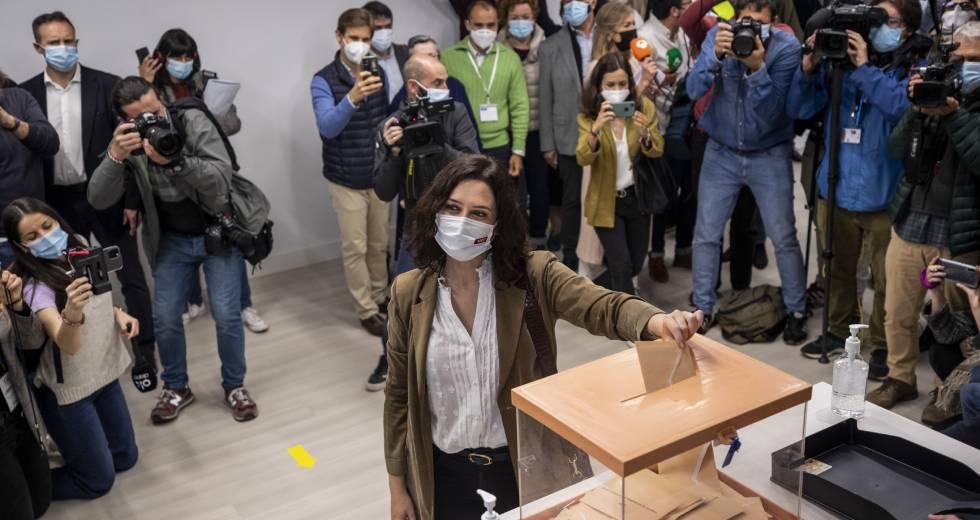 It more than doubled the People’s Party seats • The Social Democrats collapsed • Pablo Iglesias left politics • The citizens (Ciudadanos) stayed out of Parliament. The extreme right VOX acts as a regulator.

The People’s Party won a landslide victory in the regional elections in Madrid. He managed to grab more seats than the entire center-left bloc combined, paving the way for him to rule with tolerance for the far-right VOX party, which has already announced that it supports it without demanding to join the government. The Social Democrats collapsed and registered their worst results in the margins, and the citizens disappeared from Parliament. Podemos also prepares his wounds with his leader, Pablo Iglesias, announcing his departure from the top of politics.

In a first reading, conservative candidate Isabel Dias Ayuso has reasserted her management throughout the pandemic as she pursued a loose strategy for the Coronavirus to attract voters tired of the restrictive measures imposed to combat it, ignoring the measures taken by the Spanish government.

The election result is seen as a strong warning message to the Sanchez government that managed to take the right window, but Ayusu’s landslide victory was celebrated as a harbinger of a comeback.

The leader of the coalition that won the elections failed to secure enough seats to govern the region without the support of another party as he won 64 seats, out of the 30 he won in 2019.

Vox’s far-right party, which has moved from 12 to 13 seats, according to preliminary results, appears to be a likely candidate to support Ayusu in the 136-seat regional parliament.

And Ciudadanos from the center-right, who co-ruled the Madrid region with the People’s Party, sank without a seat, compared to the 26 he won in the previous election two years ago.

The ruling Socialists dropped from 37 seats to 25, which is not enough to allow them, along with other left-wing parties, to challenge Ayusha. Heavy defeat for Podemos’ leader, Pablo Iglesias, who holds ten seats and drives him out of the political scene.

The leader of the Radical Left Party, partner of the Socialist Party in the ruling coalition in Spain, announced his departure from politics late last night.

“We have failed,” he told a group of his party supporters, saying that he felt “a scapegoat that mobilizes the darkest and most anti-democratic sentiments.”

“I think it is clear that today (…) I am not helping to unite people,” the 42-year-old continued.

For this reason, he added, “We are resigning from all my duties, and I am abandoning politics in the sense of partisan politics and institutional policies,” so as not to stand as “an obstacle to the renewal of the leadership that our political strength needs.” .

Iglesias also described the victory of the People’s Party (PP, the conservative right) as a “tragedy,” which he described as “Trump’s right”, after the name of former US President Donald Trump, as well as the good proportions that the PP won. The far-right party.

According to political analysts in Spain, after many years, the conflict in Spain’s largest and richest region revolves around the classic ideological axis of left and right. The People’s Party has always won since 1995, and the outcome of elections in this key region can determine political developments in Spain.

The exit polls confirm the losses of the Socialist Party, which won the 2019 elections 37 seats, while the other parties won respectively: PP 30, Unidas Podemos 7, Más Madrid 20, Vox 12 and Ciudadanos 26. .

Despite the epidemic and the fact that the elections took place on a working day, the turnout of the Madridians was extremely high, reaching nearly 70%, 11.5 points higher than in the 2019 elections. 4,752,000 citizens had the right to vote. Vote.

Citizens formed huge queues outside the polling stations, especially in the morning, when the polling stations opened, and in the late afternoon, when they had finished their work. Many also took leave to exercise their right to vote. Until the last moment, political parties and their leaders called on citizens to go to the polls.

Due to measures to prevent the spread of the epidemic, the use of protective masks was mandatory, while polling stations were set up in both schools and in open spaces, such as stadiums and arenas where bullfights are held.