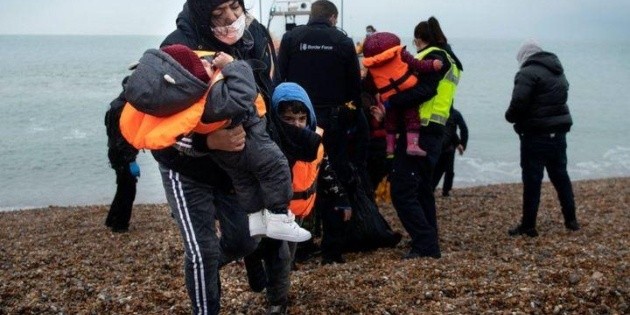 The English Channel is one of the world’s busiest shipping lanes, and is now also the center of disputes between France and the United Kingdom in the post-Brexit era.

Two fronts indicate increased tensions between the two countries. On the other hand, the unprecedented increase in the number of migrants crossing this route from Calais in France to the British coast, which this week set a record number of deaths.

A diplomatic row escalated on Friday when France canceled a meeting between French Interior Minister Gerald Darmanin and his British counterpart Priti Patel, which had been scheduled for Sunday in Calais to tackle the migration crisis.

Added to this is the dispute over fishing licenses in the Channel, a direct consequence of the UK’s exit from the European Union.

On Friday, French fishermen launched an operation to close the ports and the Channel Tunnel to demand a solution to the conflict.

The migration crisis has been straining relations between France and the United Kingdom for weeks, with the two countries accusing each other of blaming each other for the unprecedented increase in the number of crossings.

The situation worsened this week, when 27 migrants lost their lives when their rubber boat crashed near Calais while trying to reach the British coast, the largest loss of life in the canal since data collection began in 2014.

After this incident, Prime Minister Boris Johnson posted a message to France on Twitter proposing that migrants crossing the English Channel should be sent back to that country.

In the letter, Johnson details five measures he would like to see “to move forward faster and faster” in this crisis and prevent a repeat of a tragedy like the one that occurred on Wednesday.

Among them, French President Emmanuel Macron calls for “joint patrols to prevent more boats from leaving French shores, the deployment of technology and patrols in their respective waters and the bilateral agreement with France on the ‘return’, as well as negotiations to create a return agreement between the United Kingdom and the European Union.”

France’s reaction to Johnson’s public appeal has been vigorous. At a press conference, Friday, Macron criticized the UK’s handling of the crisis.

The correct answer is to cooperate seriously, stop these movements, dismantle the smuggling networks, and prevent these men and women from reaching our land, because it is too late.”

He also attacked Johnson for posting the message on Twitter: “I spoke to PM Johnson two days ago in a serious way.”

“Between leaders we don’t communicate on these issues through our tweets and messages.”

A French government spokesman said the message was “totally inconsistent” with discussions that Johnson and Macron had on Wednesday. “We are tired of double standards,” he added.

Britain insists that the prime minister’s message was sincere and intended to be constructive, not combative.

For France’s Interior Minister, Gerald Darmanin, the message is “unacceptable and incompatible with our discussions between partners”.

“As a result, Priti Patel is no longer invited” to talks on Sunday in Calais that Macron organized to try to deal with the recent surge in migrant crossings across the English Channel, which they will attend – as well as France. Belgium, the Netherlands, Germany and the European Commission.

Britain’s Transport Minister Grant Shapps said France should re-invite Patel. He told BBC Breakfast: “No country can handle this alone. I hope the French will reconsider (not Patel’s invitation).”

“It’s in our interest. It’s in their interest. It’s definitely in the interest of people being trafficked into the UK, with these tragic scenes we’re seeing: people losing their lives.”

How big is the migration crisis?

A record number of immigrants cross from France into the UK.

Britain signed a deal in July to deliver 62.7 million euros (more than $70 million) to France during 2021-22 to help secure the border, but the number of people crossing continued to rise.

More than 25,700 people have made the perilous journey to the UK this year in small boats. The number is more than three times the total for 2020.

For years, people smugglers have sent migrants to the UK in trucks, but security has been tightened in the port of Calais, where British border controls are in place.

This means more attempts are being made by sea, according to Tony Smith, former Director-General of the British Border Force.

The Covid epidemic has also played a role, Smith says, as the number of trucks crossing into the UK has been reduced: “Smugglers have changed their tactics and have now embraced this relatively new phenomenon of putting people in small boats and bringing them in that way.”

In a note published by BBC Mundo last September, Peter Walsh, a researcher at Oxford University’s Migration Observatory, said the main reason for the rise of migrants on the canal was geopolitics.

“Most of the migrants come from Iran, Afghanistan, Yemen, Syria and Sudan, countries in conflict that are experiencing wars and political persecution,” the expert, who analyzes UN data at the time, explained.

In addition to the fact that language plays an important role in explaining why migrants want to move from France to the UK, the few studies that exist suggest that family ties are the main reason migrants want to cross.

“They have a connection to the UK, they speak some English, they have a family, they have friends and people in their networks. They want to come and stay and rebuild their lives,” said Enver Solomon, Executive Director of the Refugee Council. The BBC is a British group working with refugees and asylum seekers, which has called for measures to help migrants.

Asylum applications lodged in the UK this year rose to a nearly 20-year high, at 37,562 as of September.

Last year, Germany had the largest number of asylum seekers in the European Union (122,015), while France had 93,475 applicants.

In the same period, the UK received the fifth largest number of applications (36,041) compared to the European Union (about 7% of the total), according to data from the United Nations High Commissioner for Refugees (UNHCR).

Parallel to the migration crisis, France and the UK have been at loggerheads for months over how many licenses should be granted to French fishermen as part of a post-Brexit agreement to be able to fish in the waters off an island. jersey.

Under the agreement with the European Union, French boat operators must show a history of fishing in the area in order to obtain a license for the waters of Jersey, a small British subsidiary located 22 kilometers from Normandy.

But there are disagreements about what evidence is needed.

Large fishing vessels collect this information on a routine basis.

However, small boats coming from French ports to fish around the Channel Islands may have a more difficult time providing the necessary evidence.

France has threatened to prevent British fishing vessels from landing their catch in French ports unless more permits are issued covering UK waters. But after weeks of discussions, no agreement was reached.

The British government insists that the vast majority of license applications be granted.

Gérard Romiti, president of the French National Fisheries Committee, at a press conference on Thursday.

You can now receive notifications from BBC Mundo. Download and activate our app so you don’t miss our best content.