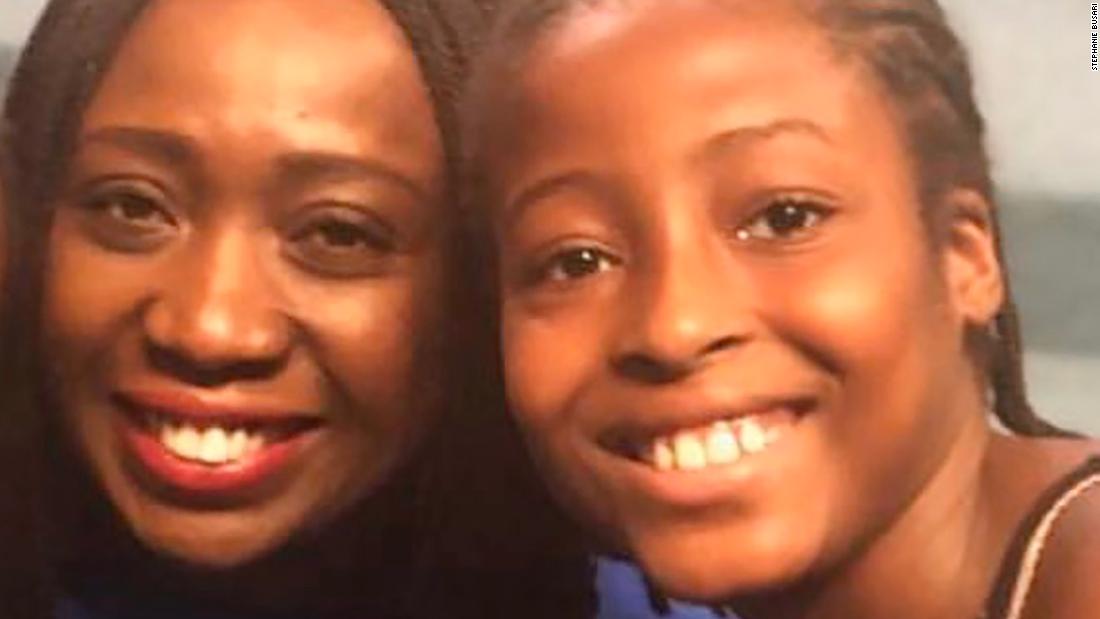 My heart skipped a beat. My daughter is nine years old, and I was hoping to protect her from the brutality of that video.

“I wanted to protect you,” I replied, completely upset by the conversation.

“But Mom, you have to tell me these things. I have to be willing to deal with it because I’m black.”

My little girl is already preparing to hate others, simply because of her skin color.

“Is that why we moved to Nigeria?” she asked.

I took a deep breath and tried to answer her questions as honestly and openly as I could.

I explained that moving to Nigeria happened in part because I wanted her to grow up in a world free of the racism and micro-aggression and mental exhaustion that comes with them, just as I did at my age.

A world in which her races would not be predetermined by her gender.

A world in which she would be part of the majority, not a tolerated minority.

A world in which she would be fully accepted and simply belong – without having to explain where she came from or justify her existence.

I was born in Nigeria in the late 1970s and lived there until my family moved to London when I was 12; I wanted him to experience the freedom from racism I remembered then.

But times have changed. We now live in an interconnected world. And lo and behold, my beautiful black daughter told me that I could no longer protect her from racism, rather than prevent her from breathing.

My daughter was born in the UK. She was five years old when we moved to Lagos and she already had an awareness of her race in ways I didn’t have the same year.

I remember when I was eight, in the 80s, living in a mostly black country.

The conversations were completely different then.

I had no idea about the color of my skin until we moved to London in 1989.

From the ridicule of the “African beetle” to the more insidious forms of racism. Once the door slammed into my face. On another occasion, a friend from a white school told me that one of his friends asked him why he was hanging out with a “dirty African”.

I was born into a well-to-do middle-class Nigerian family and grew up with all the benefits it brought.

But in London, it quickly became clear to me that our status had changed – I am now an outsider, a “second” whose everyday interactions will be characterized by her race.

From a college counselor who told me there aren’t many black journalists, so maybe I should consider a second career path, which will accompany me to shop attendees as they shop in south London, where I grew up.

The one who cut very deeply – and it hurts even now, when I remember – was the time I was walking my daughter, then three years old, home from the crib and a white woman saw us coming down the road and clutching my bag tightly in response.

Even next to my younger daughter, this woman thought I was going to rob her.

There was simply no respite from that.

Microaggressions have been described as death through thousands of cuts on paper. They were an almost everyday occurrence living in London – a city that considers itself very cosmopolitan, diverse and “above” stories about race.

Well, when the opportunity came back to Nigeria, I grabbed it with both hands. I knew instinctively that I wanted to protect my daughter from the dehumanization of racism.

England offered me a world of possibilities, but after three decades of living in London, I was ready to move on.

And returning to my homeland, as I jokingly say about Africa, allowed me to exhale, put off a heavy burden that I didn’t even realize I was carrying.

I jumped at the opportunity to raise my daughter differently.

These days she likes to watch Nollywood movies, in which the protagonists look like her, and she can be imagined as the leading woman of her own storytelling, rather than a bit of a role in a story someone else wrote for her.

For her, every day is a black month of history – it’s not just shifted to a few weeks of the year as a token.

She knows that her history does not begin or end with slavery.

I teach her that black history is IS history.

We learn about the powerful women of African warriors: Queen Amina from Zaria. Nzinga. Yaa Asantewaa, some of whom took over the colonial lords, and won.
I will now add books on Harriet Tubman. Rosa Parks. Martin Luther King, i Malcolm X – among many others – to our reading list.

She has shown that she is ready and that she can handle these more mature conversations.

The burden of oppression

This unexpected but vital exchange with my daughter allowed me to realize that as Africans we too have a privilege in the race – because we just don’t have to fight the race.

In a country where everyone is black, your identity is not at stake. Instead, we have a strong sense of who we are.

I visited the village where my grandfather was born, I speak my language and I know everything about my culture and heritage.

Blacks around the world whose ancestors were removed from Africa by chains during the slave trade cannot so easily search for those lost identities.

Returning to Nigeria gave me a respite from the burden of oppression that blacks have carried abroad for centuries.

From slavery to Jim Crow, in the fight for civil rights even now Black living matter.

The burden of being black is no longer my reality – although life in Nigeria is far from perfect, and divisions of identity, mostly on ethnic and religious grounds, exist.

But, as Africans, we are not exhausted from fighting an invisible and insidious enemy, similar to the condensate of the coronavirus, which is slowly squeezing life out of you, like a knee to the neck.

Friends Africans, it’s time to test our own race privilege: the privilege that gives us the mental safety net to move to America and pick up opportunities that African Americans fought for and died for.

In America, we have achieved “elevated minority status“to which Fordham University professor Christina M. Greer refers in her book Black Ethnics: The Race, Immigration, and the Quest for the American Dream.

“Blacks from abroad often perceive whites, and even black Americans, as different and‘ special ’- as more diligent and productive citizens than their black American counterparts,” Greer wrote.

prominent Africans spoke out against police brutality the assassinations of George Floyd and in some African countries stifled protests of solidarity were held.

But there were also a lot of reactions from the deaf voice of Africans, both in the U.S. and at home, which is an echo of echoes I’ve heard many times in the past.

There is a video An African at one of George Floyd’s protests in Washington. when you can hear him say, “You guys aren’t oppressed … Black life matter is a joke … You’re lazy … Go and find a job.”

Africans also face our own struggle, but all too often we reject the black American struggle and therefore show no empathy.

See also  Will Shorts wants to promote his sport

For too long there have been divisions on both sides.

Far from “playing victim,” we must recognize that black Americans are the real victims of the constant and continuous systemic oppression that contributed to the chanting of “we are exhausted” that we heard over and over again during George Floyd’s protests.

It’s true that a Harvard degree, job status, and a charming accent won’t stop you from experiencing racism – nor will you be an “exemplary minority.”

Amadou Diallo, 22, from Guinea, West Africa, was shot 41 times by a plainclothes police officer at his 1999 New York home. Diallo, who was unarmed, was hit 19 times. Officers later testified that the deadly shooting was a tragic mistake. They were acquitted of murder.

In the same way that white people are asked to educate themselves on issues of race, Africans must take the time to learn about this struggle and to understand why African Americans are so angry, hurt, and tired.

Meeting with the police should not be tantamount to the death penalty. And yet it is all too often the real reality of many blacks, not only in America but also in the UK and parts of Europe.

There is no sliding scale of equality. We are all human and we deserve the same level of humanity.