“We don’t equip every room” – Ludwigsburg 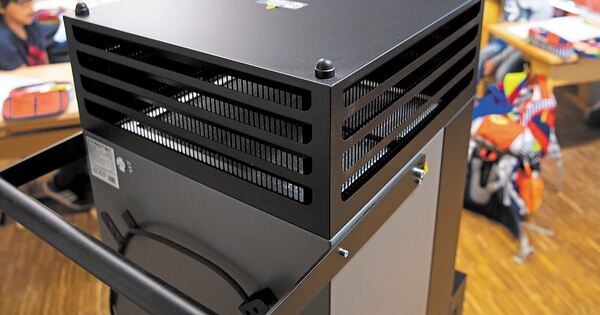 Ludwigsburg. Some need for discussion on the part of city councils and criticism of the pace of city management: The appearance of Daniel Whitman, the new head of the Department of Education and Family, on the last city council before the summer recess, brought news. For 80,000 euros for air purifiers and 82,000 euros for CO2 traffic lights in schools and day care centers, there is funding from the state or the federal government, which has yet to appear at the Education and Construction Committee meeting at the end of June.

Half the funding in the room

The state program provides funding of 60 million euros for air purification for schools and ten million euros for day care centres. Devices from categories 1 to 6 should be installed mainly in poorly ventilated rooms. In addition, there are 20 million euros from the federal government. The Chamber has a 50 percent state contribution to the costs.

This good news was smoothly followed by criticism of the city councils – despite the decision, Ludwigsburg was not announced and has now lost the lead for one month. “This is disturbing,” commented Sebastian Haag (FDP) as well as fellow parliamentary group Jochen Ezel. Klaus-Dieter Meyer (CDU) accepted Whitman’s announcement that his mission was to ruthlessly attract funding into the country. It was assumed that the hardware had already been ordered. The Left Council Jürgen Müller has expressed himself in a similar way. The number is small, Whitman says, “We don’t outfit every room.”

Time plays a role. As Whitman said, the state expects the criteria for granting funding in the next two weeks – then school authorities throughout Baden-Württemberg will tender. Together, there are about 70,000 classrooms. In this case, there are increasing signs of potential delivery bottlenecks if they are urgently needed. The dpa quoted Jean-Eric Rachke, director of air filtration systems at Ludwigsburg, which specializes in filtering Mann + Hummel, as saying that the equipment will last until the new school year. According to the German news agency (dpa), Rachke said, “It will not work to provide all the classrooms quickly,” adding that “the initial operation is necessary.”

When asked by LKZ, M + H is relative evaluation. According to press spokesman Andreas Walbilic, the warehouse is currently full and production is increasing at four locations around the world. However, he says, after the efforts of M+H, which provided schools in Ludwigsburg with loan equipment for exams, it has been a long time since spring 2020 that it could have been used.

However, the tender includes all manufacturers of air purifiers whose production has increased significantly. Representatives of parents and teachers’ associations want to install as many portable air purifiers as possible during the summer holidays. The PhV Association of Linguists and the Association for Education and Upbringing (VBE) also want maximum protection for face-to-face teaching at the start of school at six weeks. The epidemic is not over, on the contrary. “It’s about making schools crisis-resistant in the long run and keeping schools open in a potential fourth wave,” said Jens Link of the teachers’ union. According to PhV, €280 million should be made available for comprehensive equipment.

In Ludwigsburg there are only 17 rooms in schools and day care centers for mobile filters, and now the possible amount is clarified for 80,000 euros. According to Wittmann, there will be CO2 traffic lights for around €200, two per school and year. An elementary school gets eight traffic lights, Realschule 12, and G8 Gymnasium 16.