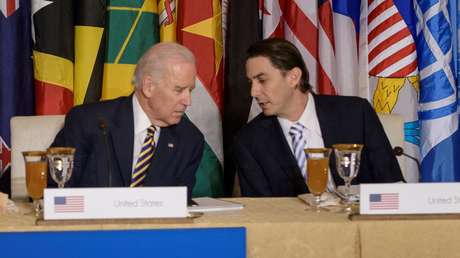 US Secretary of State Anthony Blinken announced Friday that his latest report to the US Congress lists two Russian individuals or entities and a Russian ship involved in Nord Stream 2 in context. Blinken did not provide any information about who specifically the US punitive measures were directed against. The minister stressed that the new measures are in line with the US government’s continued opposition to the pipeline that will transport gas from Russia to Germany bypassing Ukraine.

In a letter to Congress sent on Friday, Biden said that “certain Russian energy pipeline projects” expand Moscow’s influence over the energy resources of the European Union and weaken “Ukraine, NATO countries and the European Union on the eastern side,” thus threatening “national security, foreign policy and the economy of the United States.” “.

The new order prohibits “the ownership and interests in property of foreign persons” who “engage in certain activities or provide certain services in order, among other things, to facilitate the construction of the Nord Stream 2 pipeline project.”

Biden said the Departments of State and Finance will identify the persons and entities involved in accordance with the Protection of Energy Security in Europe Act (PEESA) 2019, and sanction them “unless such persons are granted an exemption in the national interest under Section 7503(f) of PEESA.”

See also  US scams exposed for falsifying the assets of Coronavirus_China.org.cn

The White House announcement came on Friday, when Chancellor Angela Merkel met with Russian President Vladimir Putin in Moscow. Among the items on the agenda was the Nord Stream 2 project, which aims to double Russian gas exports to Germany. The new sanctions apply to Russia’s Nobleli and Constanta, an insurance company involved in the pipeline project, as well as to the supply ship Ostap Sheremeta. Bloomberg Quoting sources in the Ministry of Foreign Affairs. The reference to the exemption indicates that the sanctions will not apply to Nord Stream 2 and its German general manager.

Biden had made this exception in May on the grounds that the pipeline was nearly complete and that failed efforts to block it were threatening the alliance with Berlin. This means the penalties will be largely symbolic, with the pipeline expected to be completed in a week or less. Once operational, Russia will be able to increase the amount of natural gas it can deliver directly to Germany without relying on Ukraine or Poland for transit.

Just last month, the US government and the federal government announced a breakthrough in the dispute over the German-Russian pipeline. They issued a joint statement pledging support for Ukraine. For years, the United States had narrowly escaped Nord Stream 2 and put pressure on it through sanctions. The US government has since admitted that it will no longer be able to block the pipeline.

Blinken’s announcement on Friday said that even if the US government remains against Nord Stream 2, it is working with Germany and other allies to reduce the risks the pipeline poses to Ukraine and other countries. Both Washington and Berlin have appointed a special representative for precisely this purpose.

On Friday, Washington and London also imposed sanctions on seven Russians and issued a joint statement warning Russia against chemical weapons. Washington has separately imposed sanctions on two other men and four Russian institutes allegedly involved in chemical weapons research or the attempted assassination of Navalny, according to the United States.

According to information published on the website of the US Treasury, the order is directed against the Institute of Forensic Sciences of the Russian Federal Security Service and the Institute of Experimental Military Medicine of Russia, among others.

The US Treasury said: “The US Treasury Department’s Office of Foreign Assets Control and the US State Department jointly with the UK today imposed additional sanctions on Russia in response to the government-sponsored poisoning of Russian opposition leader Alexei Navalny.” Department notice. The UK had previously imposed restrictions on seven Russian nationals: they were placed on a list related to “chemical weapons”. The document allegedly relates to employees of the Federal Security Service of Russia.

An updated version of the British sanctions list contained seven new names: Alexei Alexandrov, Vladimir Pangaggio, Ivan Osibo, Vladimir Bogdanov, Kirill Waselgiu, Stanislav Makshako and Alexei Sedov, who were said to be responsible for “planning or carrying out the attack on Mr. Navalny,” in a statement Issued by the Ministry of Foreign Affairs.

British Foreign Secretary Dominic Raab said the move was a warning to Russia. “We are sending a clear message that any use of chemical weapons by the Russian state violates international law and that a transparent criminal investigation must be conducted,” he added.

See also  The room served as a point. Thomas Zeb at the Guido W. Baudach Gallery

“Unilateral sanctions are illegal because they were not approved by the UN Security Council,” Russian Foreign Ministry spokeswoman Maria Sakharov said on social media.

“Russia has destroyed its chemical weapons arsenal in accordance with the international obligations it has taken upon itself. This cannot be said about NATO countries, such as the United States of America,” Sakharov said.

More on this topic Wolfgang Bettner: The United States is pursuing a long-term strategy to prevent German-Russian cooperation