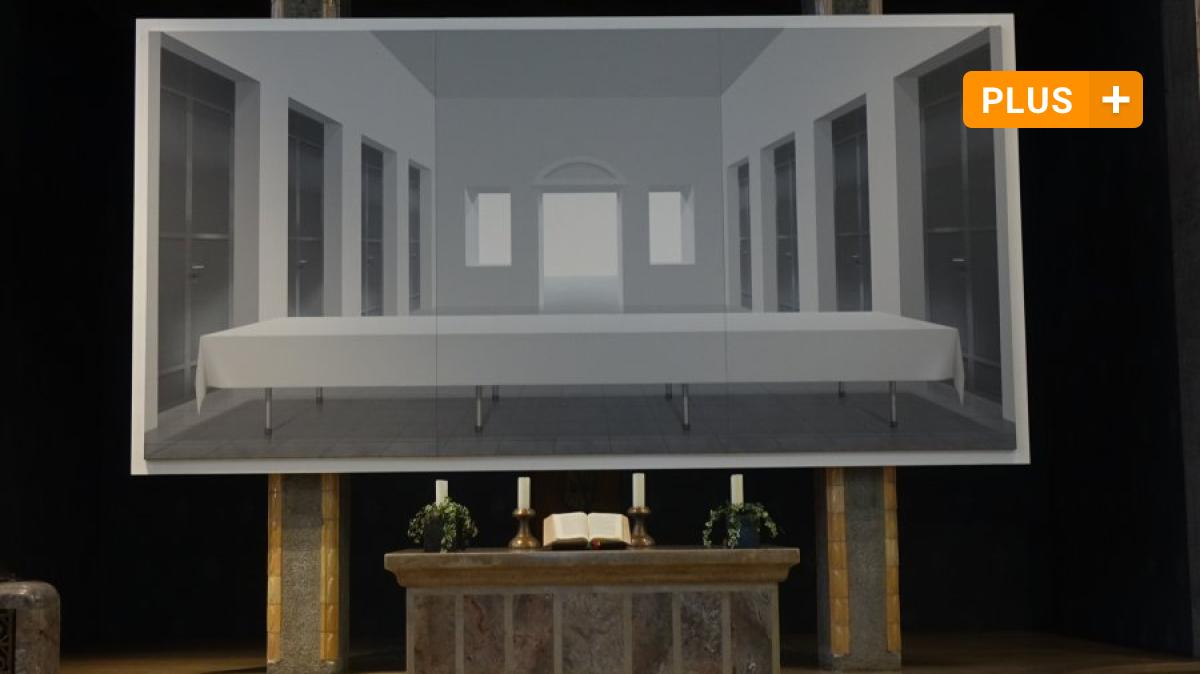 Plus
At the Pauluskirche Church in Ulm, Ben Willikens “Room 608, Last Supper” covers the altar – with Christ on the cross by Adolf Hölzel. What is behind it.

Andrea Loyking, patron of Pauluskirche’s cultural work, says she is curious about the change in Pauluskirche’s spatial impact. This year, in the Time of Passion, Pauluskirche adopts the medieval tradition of covering the cross and thus obscuring the presence of God – in contemporary form: Ben Wilkins, one of the most important contemporary German painters, has been working on the sacrament table by Leonardo Da Vinci for decades since 1977 Vincis, albeit in A peopleless shape, meticulously composed in white and gray. In Pauluskirche, the large format “Room 608, The Last Supper” from 2009 – made available by the Weishaupt group – will cover the entire church with Christ on the cross, established by Adolf Hölzel in 1910.

Willikens’ concept is based on white and gray. Presumably, As Andrea Loyking explains, the early impression of Leipzig, the city in which Ben Wilkins was born in 1939, and which was bombed in the winter of 1943, shaped his business. White snow covers everything and gray ash on top. It says, “The human being turned off.” “There is nothing alive there.” However: if you look closely, you will spot a light shining from behind the room into the estranged emptiness of the table. Resurrection hint? “Willikens demonstrate the possibility of resurrection,” says Andrea Loiking.

Meanwhile, an abandoned, huge, and disturbing Last Supper table panel is installed at Willikens in the Pauluskirche and will remain on display until Good Friday, April 2. With the artwork gallery, Andrea Luisking wants to ask the questions: Is the world a place devoid of meaning? Who will take their seats at the table for dinner when a faithful community dwindles? This is an important question, especially with regard to the Vesper Church, which is held annually in the Poluskirch Church – because during Vesper Church, people who are not necessarily Sunday churchgoers come together to eat. They can still be researchers, and the Pauluskirche Church creates space for new encounters.

An interesting aspect appeared to the audience during the construction of the three-part artwork: The only hand-painted mural of Adolf Holzel, crucified in the Pauluskirche altar area, was altered in the 1970s by painting over a triangle symbolizing the Resurrection during the restoration work. As we know from the old black and white photos, it extended from the hip of the statue of Christ to the altar table, so to speak. For hours of construction, the ladder happened to be in such a way that it was possible to suddenly visualize the triangle again to the viewer.

On Sunday, March 14th, the Willikens Gallery “Absent – Present” will open at 10 am as part of a service at the Pauluskirche. The 81-year-old artist will be attending the subsequent art talk. After that, St Paul’s Church is open to visitors daily from 11 am-4pm. On April 1, at 6 pm, Andrea Loeking will hold a technical service on Thursdays Maundy on the theme “Absent and Painfully Present”.