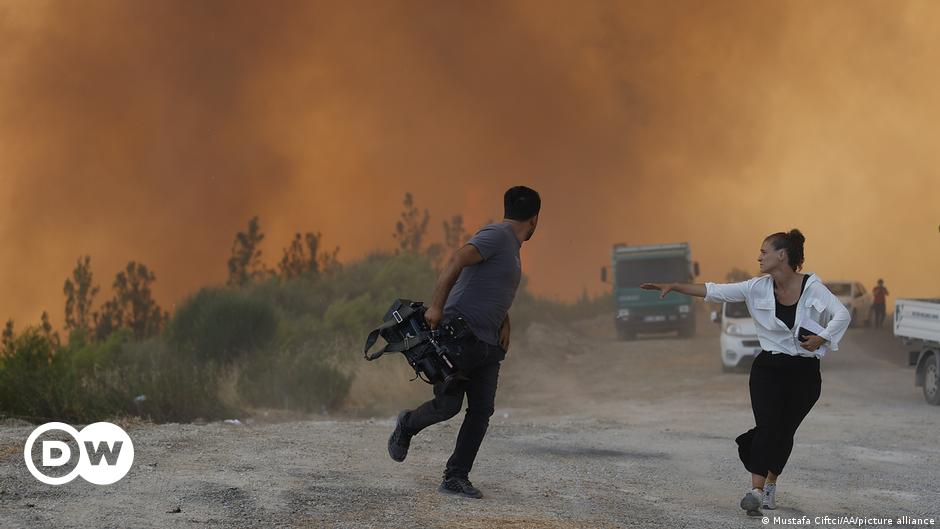 Thousands of members of the emergency forces in Turkey continue today, Sunday (August 1, 2021), for the fifth consecutive day, their efforts to control the forest fires in the country.

Many villages have been evacuated in the Aegean region of Bodrum, a popular holiday destination, according to Mayor Ahmet Aras. He said that people were taken to safe areas, sometimes using boats.

The Russian Consulate General announced that 100 Russian tourists have been transferred from a suburb in eastern Bodrum to new hotels. NTV reported that another village in Antalya province was evacuated today.

Turkey has been battling since last Wednesday to contain its worst forest fires in years. The Turkish Minister of Agriculture and Forestry, Bekir Pakdemirli, announced today that 107 fires out of 112 that broke out in separate forests in the country have been controlled during the past few days. He said that operations are continuing without interruption to control the remaining five fires.

Official data indicate that the fires have killed at least six people so far, in addition to injuring hundreds. Yesterday, Turkish President Recep Tayyip Erdogan visited the affected areas and reassured those affected with quick assistance. He stated that the number of aircraft involved in fighting the fires rose to 16, with the support of Russia, Iran and Ukraine.

Erdogan revealed that children were the ones who caused a fire in the coastal town of Marmaris. The Turkish authorities launched an investigation into the causes of the other fires, and did not rule out that they were deliberately ignited. The country is currently experiencing a heat wave, and temperatures are expected to exceed 40 degrees Celsius in the coming days.

The fires forced more residents to flee their homes as pressure mounted on the government over its delay in action. CNN Turk reported that a neighborhood in the tourist city of Bodrum was evacuated, as strong winds caught fire from nearby Milas.

She explained that 540 people were evacuated by boat due to the dangers of evacuating them via land routes. The station “NTVN” that more evacuations took place in the village of Sirtkoy in Antalya province, while gray clouds of smoke covered the houses.

The Turkish Ministry of Defense published satellite images showing the extent of the destruction, as forest areas turned black and smoke is still visible. 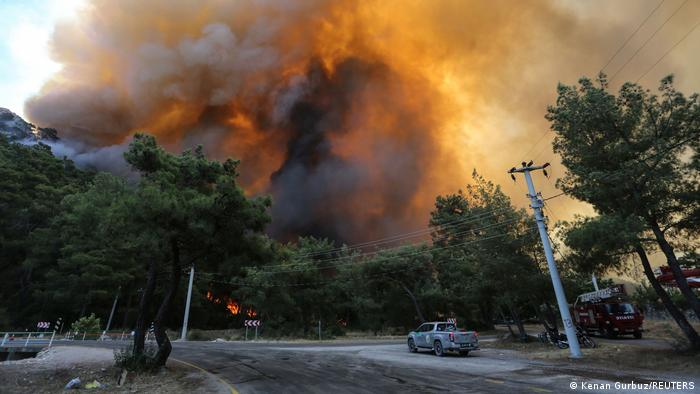 The opposition attacked President Recep Tayyip Erdogan late on Saturday after video footage showed the president throwing tea bags at residents in fire-stricken areas. In another video, he is seen throwing tea at residents on the side of the road from a bus.

“Tea! It’s incredible. Those without shame, without hearts too,” opposition Republican People’s Party (CHP) spokesman Faik Oztrak wrote on Twitter. The government has also been criticized for a shortage of firefighting aircraft, with Turkey forced to accept aid from Azerbaijan, Iran, Russia and Ukraine.

Experts warn that climate change will do more harm to Turkey, causing more forest fires if action is not taken to tackle the problem.

According to EU figures, Turkey has experienced 133 fires this year, compared to an average of 43 by this time of year between 2008 and 2020.

See also  What do we know about the Omicron variant?