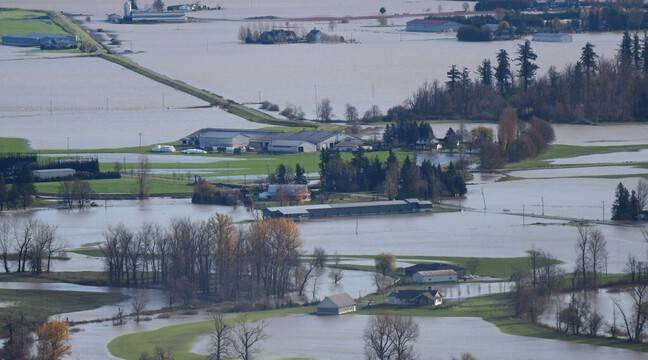 after the flood that affected several towns to the west of
Canada And earlier this week, the government sent reinforcements to the army to evacuate thousands of people
british columbia provinceA state of emergency was declared on Wednesday. British Columbia Prime Minister, John Horgan, signaled the start of a state of emergency after heavy rains on Sunday and Monday triggered landslides and
flood, killing at least one person.

Police said during the press conference that four people were also missing in the landslides. “Unfortunately, we expect to confirm more deaths in the coming days,” John Horgan said. After this summer’s deadly heat wave in the region, John Horgan warned that “these events are increasing in regularity due to the effects of man-made climate change.” The emergency aims to restore access as quickly as possible to highways, which have been closed for several days, disrupting supply chains.

This inclement weather also disrupted rail services to the Port of Vancouver. Travel is not recommended in order to prioritize the delivery of essential goods, medical services and emergency services. This procedure is valid for 14 days and can be extended. Earlier today, the Canadian government announced the deployment of “Air Support to Canadian Forces to assist with evacuation efforts, support supply routes, and protect residents from floods and landslides.” “Hundreds of Canadian armed forces personnel are on their way to help,” Canadian Prime Minister Justin Trudeau said, adding that thousands of troops could be sent.

Approximately 95% of precipitation per month in 24 hours

Justin Trudeau, who traveled to Washington, also promised that the government would “be there to clean up and rebuild” after “extreme weather events.” Entire streets underwater in many cities after Fraser Valley east of Vancouver recorded up to 250mm of rain on Monday. Some places received about 95% of their monthly precipitation in 24 hours. “The following steps may require exceptional measures that are only permitted under a state of emergency,” said Mike Farnworth, Minister of Public Safety. “It’s a catastrophic event,” he lamented.

This exceptional measure was previously taken to combat the coronavirus pandemic. And this summer, when wildfires swept through the territory that had been choking it under a historic heat wave. The village of Leighton, 250 kilometers northeast of Vancouver, was 90% destroyed in late June by fire in the middle of a severe heat wave after it reached 49.6 degrees. Prime Minister John Horgan highlighted “unprecedented public health challenges, wildfires, heat domes and unprecedented flooding”.

Hundreds of farmers were affected

Like Tuesday, the weather was milder on Wednesday with no rain. But authorities said the floods particularly affected hundreds of farmers in the area. “Some are still under water, others are in shelter and we have thousands of animals that have died,” said Lana Popham, the regional agriculture minister. Pictures showed a man on a water bike pulling a cow with a rope to rescue it despite the rising water, or a farmer evacuating goats from a flooded barn.

Earlier this week, Ottawa already sent helicopters to rescue about 300 drivers stranded by landslides. Abbotsford, located 70 kilometers southeast of Vancouver, on Tuesday evening urged some of its 162,000 residents to evacuate immediately due to a possible failure of the pumping station. The day before, 7,000 residents of Merritt Township, 300 kilometers northeast of Vancouver, had been evacuated.