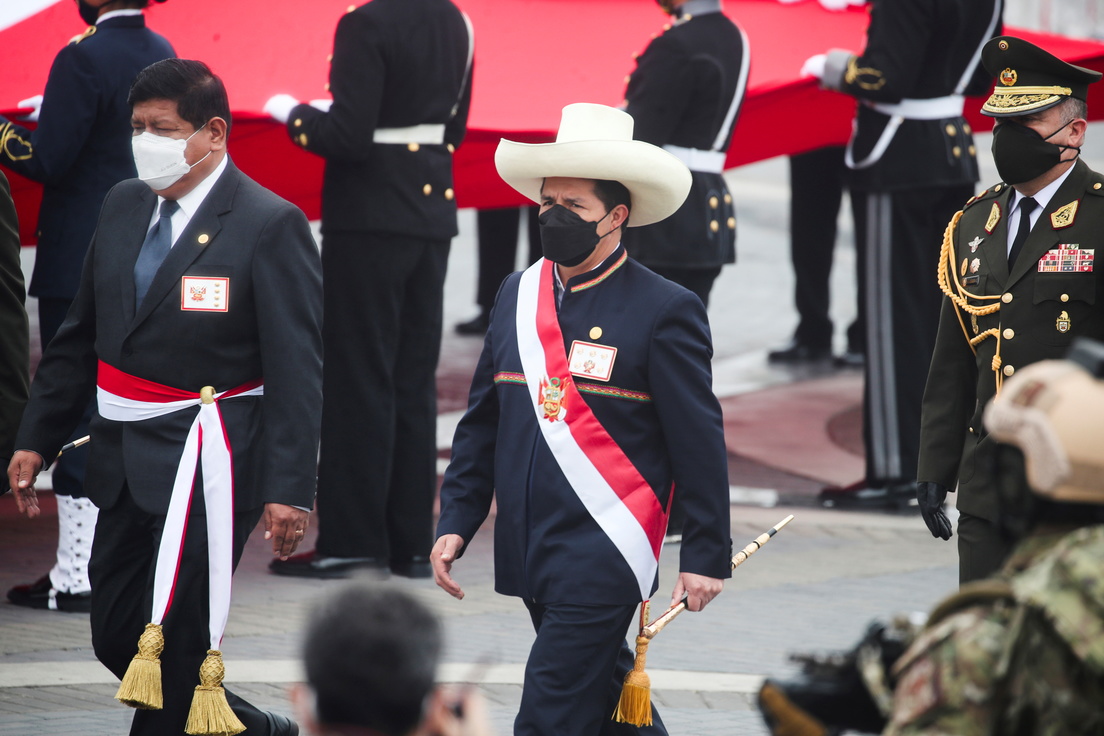 Peruvian President Pedro Castillo crossed the symbolic threshold for the first 100 days of rule in the midst of the hurricane caused by the statements of a former army chief, who denounced pressure to carry out the irregular promotion of a number of soldiers.

Jose Vizcarra, who was appointed commander-in-chief of the Peruvian army last August, retired earlier this month and “unexpectedly,” he said. As for the military, the reasons for his departure have to do with Opposition it was promotions “of the lawFrom some officers.

According to his testimony, Castillo’s government suggested that he look for a way to promote two soldiers who did not meet the requirements of this movement. These discoveries prompted Secretary of Defense Walter Ayala to do so situation His position by order and performance of the Secretary of the Presidency, Arnulfo Bruno Pacheco Castillo, and the President himself, will be called into question, adding another scandal to the administration of the Left, which just last week reached a question of confidence for its second government in four months.

“I resent this unexpected change after three months in command, without any explanation from those who have the obligation and moral duty to formally communicate with me,” Vizcarra said in his farewell speech.

However, his tone rose on Monday, when he offered an interview with RPP He asserted that he had a “moral obligation to tell the truth” about his departure, and launched accusations against the Castillo government for allegedly pressuring him to carry out promotions for Colonels Carlos Sanchez Cahuankama and Ciro Bocanegra.

Apparently, the Castillo government recommended the promotion of both soldiers. “On October 11, 12 and 13 (…) the Minister [Pacheco] Vizcarra said he reprimanded me that the recommendations had not been promoted,” to whom he claimed neither of the proposals had sufficient merits, to which the Presidential Secretary replied, “Everything can be done if you like.”

The former commander confirmed that Castillo was aware of the situation, although he had promised at the time that the former captain’s standards would now be respected. On Wednesday this week, Vizcarra Back In front of the congressional defense committee to hand over a transcript of the chats that would corroborate their complaint.

Minister Ayala, the presidential aide and even the president will participate in these conversations. “All the communications I make here via WhatsApp, I have printed it out, and I am going to deliver it (…) directly because of it I don’t intend to bring this up in the media at all. I am ending my participation in this honorable hall and I intend to stay away from this topic, because if it hurts me, imagine the army.”

Vizcarra allegedly requested that the content of the conversations be kept confidential to prevent it from being leaked to the press, which is why he also opposed all members of the defense committee’s access to printed documents.

Vizcarra has reportedly requested that the content of the conversations be kept confidential to avoid it being leaked to the press.

But the scandal did not stop there. On the same day, other soldiers of the Peruvian army spoke to Report That there will be at least two irregular ascents This has been approved by Vizcarra. Generals Julio Dominguez Vasco and Marco Campos Jerónimo asserted that they had evidence of alleged favoritism for promotions in vain, and suggested presenting them to Castillo.

Although Vizcarra denied that this was the case, the lawyer for the two soldiers, Jesus Barbosa Cruz, questioned the actions of the former commander: “Why did he not apply the same merit to the generals Marco Campos and Julio Dominguez, who took first and second places in the final frame?”.

In the midst of the turmoil, Javier Pacheco, a lawyer who specializes in the crimes of official corruption, denounced the Secretary of the Presidency of the alleged crime of abuse of power, at the expense of the Peruvian army.

On Wednesday, after attending a hearing before the Congressional Justice Committee to explain the scope of a questionable resolution authorizing the Armed Forces of the National Police to support security work in the cities of Lima – and that it was rejected by Commander Vizcarra – Ayala confirmed he would remain in office.

“I made my position available and The boss told me to keep workingAyala announced to local media, after making sure that he has a “clear conscience”. “If I don’t do something, why would I quit?”

But the attorney general’s office announced this Thursday that it would open a preliminary investigation against Ayala over alleged pressure for promotions in the armed forces. An investigation will be conducted to verify allegations of abuse of power and unlawful bail.

Prosecutor Zuraida Avalos Rivera, as the lead in the criminal case, has launched a preliminary investigation against the Secretary of Defense, Walter Ayala, and those responsible for the alleged pressure exerted on promotions in the armed forces.https://t.co/vPBy4R9ddb

The prosecution’s investigation will not only involve the minister, but also Pacheco and all the people behind the improper promotions, should complaints be confirmed.

“In the coming days, the Public Prosecution Office will collect the testimonies of Minister Walter Ayala, Secretary General Bruno Pacheco, and former commanders-in-chief of the Peruvian Army and Air Force, José Vizcarra Alvarez and Jorge Chaparro Pinto, respectively, among others.”, the Prosecutor’s Office advanced.

Besides the direct repercussions of the case against part of the Cabinet and Castillo himself, the Peruvian media have speculated about the impact that Ayala’s continuity will have, particularly due to the position of Prime Minister, Mírza Vázquez, who did not attend the event at. Which the president will celebrate his first 100 days in office.

Vazquez’s scandalous absence in Ayacucho gave rise to rumors of a rift with the president, who appointed her to her post thanks to her moderate personality.

Vázquez, who succeeded controversial Guido Peledo as prime minister and supported the departure of former Interior Minister Luis Barranzuela (due to a scandal with fewer repercussions than that of Ayala), promised Monday that “decisions will be made in the next few hours,” after the revelations of allegedly improper promotions reports. . But the hours passed and the president did not fire the chief of defense.

On Wednesday afternoon, Vazquez’s scandalous absence in Ayacucho sparked rumors of a rift with the president, who appointed her to the position thanks to her moderate personality. He likes some parliamentarians Congresswoman Sucil ParedesThey even ordered her not to resign if Ayala remains defense minister.

“If the boss does not want to remove them [a Ayala], we take it out [el Congreso]”, a promise Paredes, from Party We Are Peru. “You signed the interrogation, and for sure it will end with censorship. You will have to go home,” he added.

For now, Ayala’s position within the cabinet remains in place, although Somos Peru has already requested his resignation. Today’s debate is expected to be at the level of Congress, and one of the points will be a motion to question the Secretary of Defense, who will also have to appear before the Defense Committee on Friday.

If you find it interesting, share it with your friends