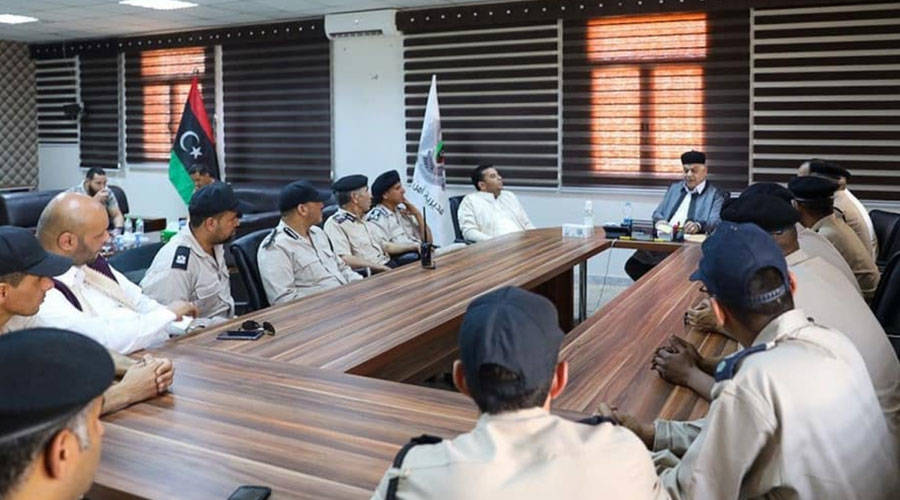 United Nations Secretary-General Antonio Guterres discussed with Russian President Vladimir Putin a number of issues, including the situation in Libya, according to the Russian agency Sputnik, while the Ministry of Interior gave the Government of National Unity a month to deliver them to the nearest police station, under penalty of legal responsibility At a time when the new head of the intelligence service, Hussein Al-Aeb, is facing difficulty in carrying out his duties, more than a week after his appointment by the Presidential Council; This is against the backdrop of his prohibition by the dismissed president, Imad Trabelsi, who refuses to give up his post, and to hand over the headquarters of the intelligence services under his control.

Guterres said, in a speech at the University of International Relations in Moscow, that discussing these topics aims to study how the United Nations and Russia can work together. To solve crises and support the population more effectively, in addition to creating conditions for the restoration of stability.

On the other hand, the Ministry of Interior gave the Government of National Unity those who possess unlicensed weapons a month to deliver them to the nearest police station, under penalty of legal responsibility.

Libyan media sources stated that the ministry circulated to the security directorates to activate a special section granting licenses to carry weapons in accordance with the law, and the security directorates demanded the establishment of a department for the licensing of weapons and explosives, tasked with granting licenses and inspecting their possession and safety.

Meanwhile, Interior Minister Brigadier General Khaled Mazen arrived in Sirte, coming to it from Hoon in the municipality of Al-Jafra as part of a work tour in the central region of the country.

On his first visit to Sirte, Brigadier General Mazen held a meeting that included the directorate’s officers, during which he stressed the need to focus on citizen security, and he also toured the directorate’s departments and the police station in the city, promising to provide the directorate with the capabilities to carry out the duties entrusted to it.

The minister indicated that the current stage the country is going through requires everyone to intensify efforts and unify work. So that Libya enjoys security and safety, and lives it in a tangible reality according to a unified and organized security effort.

Trabelsi obstruct the work of the intelligence chief

This comes at a time when the new head of the intelligence service, Hussein Al-Aeb, is facing difficulty in carrying out his duties, more than a week after his appointment by the Presidential Council. This is against the backdrop of his prohibition by the dismissed president, Imad al-Trabelsi, who refuses to give up his post and hand over the headquarters of the intelligence services under his control, which led to tension and harassment between the armed militias loyal to him and the Nawasi militia in the capital, Tripoli.

Days after his assignment to the position, Al-Aa’ib formed a committee to inventory and count all equipment, devices and mechanisms belonging to the intelligence service. So to hand it over. But the dismissed president, who is considered one of the prominent warlords in western Libya, refused to give up his post and hand over headquarters of the intelligence apparatus, backed by allied militias and based on a correspondence sent by the Audit Bureau to the Presidential Council, in which he talked about the involvement of the proposed head of the intelligence service in corruption cases, fraud and fraud. The state, and asked him to reconsider this appointment and withdraw it, in order to preserve the public interest.

In the context, local media reported yesterday, Friday, that these differences created a kind of security tension between the Nawasi militia led by Mustafa Kaddour, which demanded al-Trabelsi to evacuate all the headquarters of the intelligence service and allow the new president to carry out his duties, and the armed militias that demand the retention of Trabelsi and the withdrawal of the appointment of Al-A’ib. In moves that warn of the possibility of an armed clash.

The Libyan Coast Guard rescued 114 illegal immigrants of various African nationalities near the coast of the capital, Tripoli.

A statement by the Libyan Naval Forces Chief of Staff said yesterday, Saturday, that the migrants were intending to reach European coasts before their rubber boat was suspended at sea.

The statement indicated that upon the completion of the rescue operation, the migrants were unloaded at the Tripoli Naval Base landing point, and all of them were transferred to the Anti-Illegal Migration Agency. (Agencies)